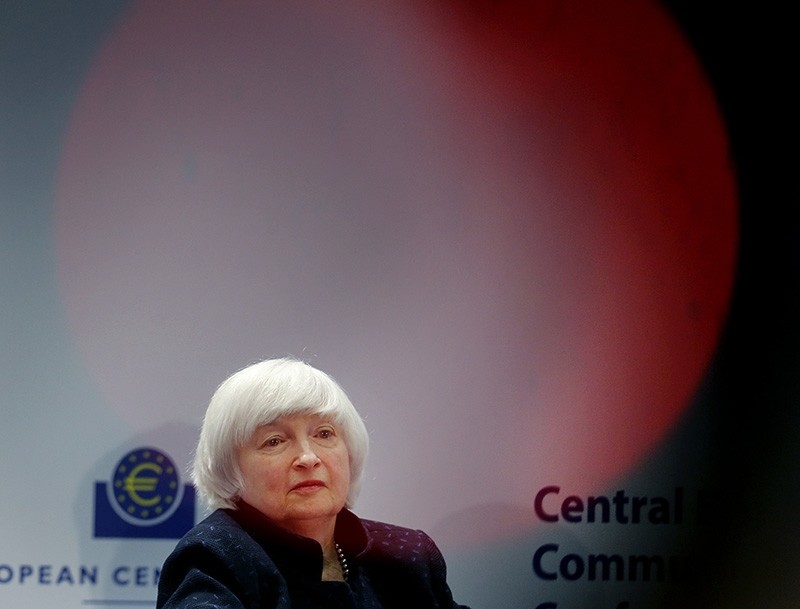 Janet Yellen of the US Federal Reserve listens as she takes part in the Policy Panel of the European Central Bank in Frankfurt, Germany, Tuesday, Nov. 14, 2017. (AP Photo)
by Compiled from Wire Services Nov 20, 2017 12:00 am

U.S. Federal Reserve Chair Janet Yellen will leave her seat on the central bank's Board of Governors once Jerome Powell is confirmed and sworn in to replace her as head of the Fed, the central bank and Yellen announced on Monday.

Keeping with past practice, Yellen in a letter to President Donald Trump said she would resign when Powell is sworn in, and in the meantime "will do my utmost to ensure a smooth transition."

Powell's Senate confirmation hearing is scheduled for next week.

Yellen's four-year term as Fed chair ends on Feb. 3. But she could have chosen to remain on the seven-member Fed board. Her term as a board member would not have ended until January 2024.

Yellen, the first woman to lead the Fed, has overseen a very gradual withdrawal of extraordinary monetary policies implemented in the years after the 2007-09 US recession. Last month, the Fed began trimming its record 4.5-trillion-dollar bond holdings, piled up since 2008 in a bid to force investment into the private sector.

Yellen is the first Fed chief since William Miller (1978-79), who left the Fed to become president Jimmy Carter's Treasury secretary, not to serve two terms.

She was on the White House's list of five finalists before Trump announced his choice, when he called her "absolutely a spectacular person" who did a "terrific job" as Fed chief.

Federal Reserve governors are appointed to staggered 14-year terms, while the chair serves a four-year term that is not concurrent with presidential administrations.

Powell, a Republican, joined the Board of Governors of the Federal Reserve System in 2012, filling an unexpired term, and was reappointed to a 14-year Fed term in 2014 by then-president Barack Obama, a Democrat.

Yellen, who joined the board of governors in 2010 as an Obama appointee, could have remained on the Fed board until 2024.

Yellen issued a statement congratulating Powell, praising his "dedicated public service and seriousness of purpose," and vowing a smooth transition.

Yellen promised to finish her term as chairwoman when Trump took office in January but never publicly stated if she was interested in four more years at the helm, though she did meet with the president last month while he was interviewing candidates.

Powell and Yellen took part in the Fed's November 1 decision to leave the benchmark interest rate unchanged in a target range of 1 to 1.25 per cent