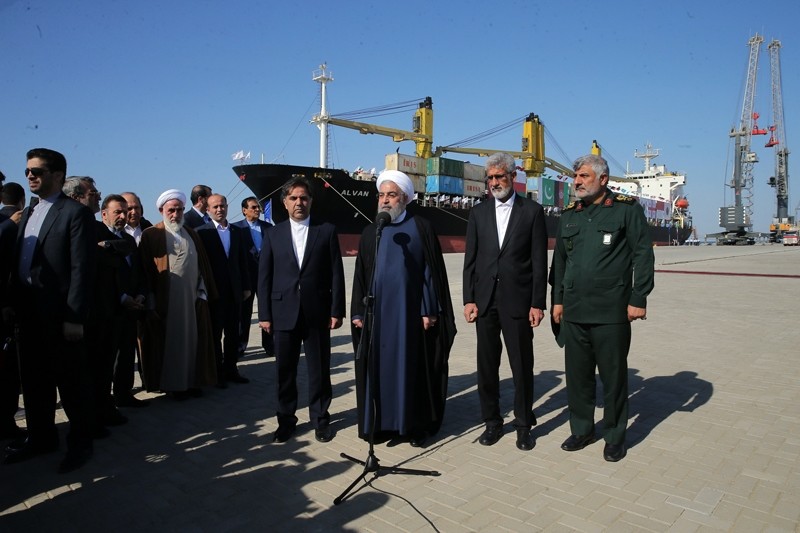 A handout picture provided by the office of Iranian President Hassan Rouhani on December 3, 2017 shows him (C) inauguraiting the first phase of Chabahar (Shahid Beheshti) Port in the southern Iranian coastal city of Chabahar ( AFP Photo)
by Compiled from Wire Services Dec 03, 2017 12:00 am

Iran opened on Sunday a $1 billion extension of its southeastern Chabahar port which Tehran hopes will help the country become a key transit route to land-locked Afghanistan and Central Asia, competing with a nearby Pakistani port.

Iranian President Hassan Rouhani inaugurated on Sunday a newly built extension to the country's main Arabian Sea outlet, the strategic Chabahar Port on the Gulf of Oman, which more than triples its capacity and poses a challenge for a port under construction in neighboring Pakistan.

The extension includes five new piers, two of them for containers allowing cargo vessels with up to 100,000-ton captaincy to dock.

It is also expected to make Chabahar, Iran's closest sea link to the Indian Ocean, a rival to Gwadar Port, some 80 kilometers away (50 miles) across the border in Pakistan, which Pakistan has been building with Chinese investment.

Rouhani, however, downplayed the rivalry in his inauguration speech and said the port will bring "more engagement and unity" among regional countries.

India has committed $500 million to the Chabahar port on the Gulf of Oman which is Iran's closest to the Indian Ocean and would allow it to bypass rival Pakistan. But New Delhi has proceeded cautiously at a time when the U.S. administration has taken an aggressive new approach towards Tehran.

For India, the investment in Chabahar was important since the port will bolster a trade route for land-locked Central Asian countries that would bypass rival Pakistan.

And last month, New Delhi shipped its first cargo of wheat to Afghanistan through the Iranian port, part of 130,000 tons that India plans to export to Afghanistan.

Chabahar also has an international airport and Iran's Navy and Air Force have bases in the city, adding to the ports value.

In October, India sent its first consignment of wheat to Afghanistan through Chabahar, located about 140 km (88 miles) from Pakistan's Gwadar port which is being developed with Chinese help.