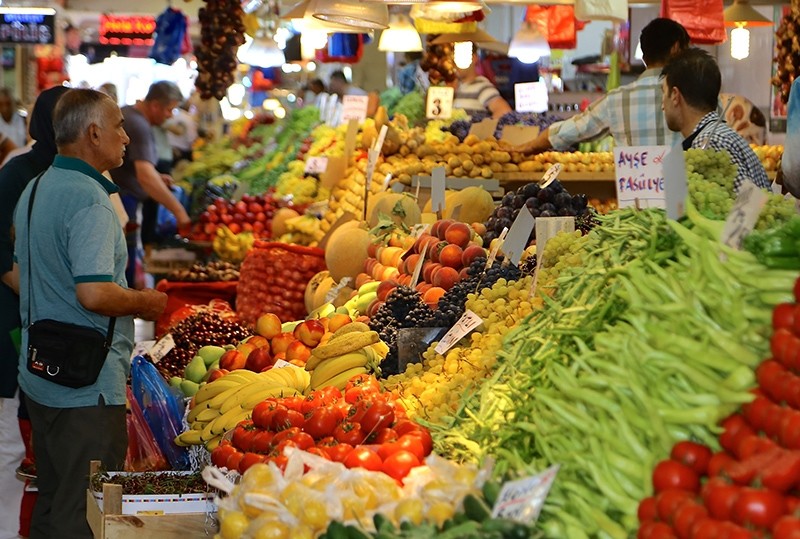 Turkey's annual inflation hit 12.98 percent in November, the highest rate since December 2003, whereas the monthly inflation stood at 1.49 percent, according to the statement of Turkish Statistical Institute (TÜİK) released Monday.

The consumer price index (CPI) increased by 11.16 percent compared to December of the previous year and 10.87 percent on the twelve-month moving averages basis.

Annual inflation stood at 11.90 percent in October, a 9.52 percent rise since December last year. Inflation rose steadily during 2017, from 9.22 percent in January to November's 12.98 percent.

Deputy Prime Minister in charge of economy Mehmet Şimşek posted a tweet Monday, saying that the rise in inflation stems from high food prices with a periodical effect in vegetables. "Starting from December, a lasting period of decrease in inflation will begin," Şimşek said.

The highest monthly increase in November was in the clothing and footwear category with 3.77 percent, followed by food and non-alcoholic beverages with 2.11 percent, transportation with 2.01 percent, miscellaneous goods and services with 1.84 percent and housing with 1.25 percent.

The least monthly increase was in alcoholic beverages and tobacco with 0.01 percent, whereas no price decrease took place in any of the main expenditure groups.

The highest annual increase was in the transportation category with 18.56 percent, followed by food and non-alcoholic beverages with 15.78 percent, miscellaneous goods and services with 13.39 percent, furnishing and household equipment with 12.85 percent and health with 12.38 percent.

The greenback rose against all major currencies on Monday in Asia and the euro/dollar exchange rate fell 0.2 percent to 1.1869 on the global currency market.

Enver Erkan, an analyst at KapitalFX, said the inflation rate would have a better chance of slowing down in December if the Turkish lira did not lose value.

"Input costs are mainly dollar-based. Turkey needs to create its own story by establishing a local policy that supports domestic production as well as structural reforms," Erkan said, adding that he expected the Central Bank to increase its late liquidity rate, which is currently at 12.25 percent.

"It seems too low in theoretical terms. Because the real interest rate is in negative levels from now on. The central bank could adjust this rate by increasing the late liquidity rate," Erkan said.

Muammer Kömürcüoğlu, an economist at İş Investment, said he expected a retreat from headline inflation in December due to a favorable base year effect and predicted the year-end inflation rate would reach 10.5 percent.

"November inflation is important for the central bank as it is the last reading before the Monetary Policy Committee meeting due on Dec. 14," Kömürcüoğlu said.

He said the bank was expected to hike the late liquidity funding rate due to a higher core inflation rate and weakened Turkish lira.

"Our initial expectation is a 100 base point hike. Yet, the final amount of the hike will be set by the path of the Turkish lira till the meeting," he said.