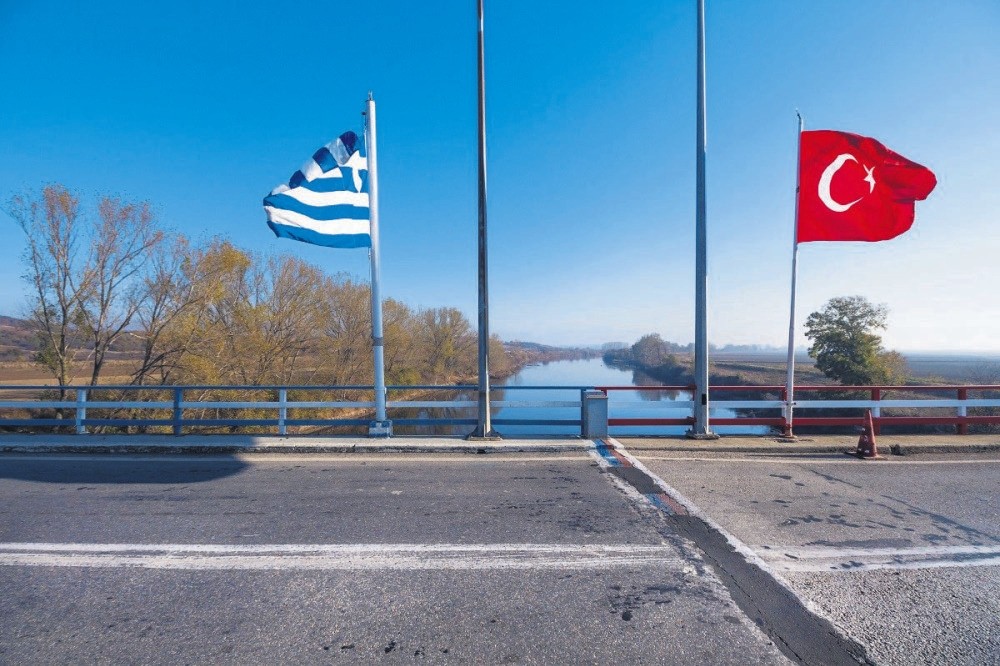 President Erdou011fan's visit to Greece is expected to stimulate bilateral economic and political relations between the two countries.
by Daily Sabah with AA Dec 07, 2017 12:00 am

The HLCC addresses various issues of Turkish-Greek relations at a high level, thus contributing to progress in existing and prospective areas of cooperation, and rendering an "institutional" ground for bilateral ties. Four HLCC meetings have so far been held and a number of agreements and protocols have been signed during those meetings.

As a result of these efforts, commercial relations have gained significant momentum and the bilateral trade volume doubled between 2010 and 2014, reaching $5.6 billion by the end of 2014. However, according to the Turkish data, the bilateral trade volume in 2016 totaled $2.6 billion. In 2012, during the second HLCC meeting, $10 billion in trade volume was declared a common goal and both sides are committed to exploring ways and means to achieve this target.

The stock of direct investments from Greece reached $6.1 billion by the end of 2016, according to information obtained from the Ministry of Foreign Affairs. Greek investors, apart from the financial sector, operate in information technology (IT), agricultural applications, packaging, plastics, pharmacy, cosmetics, fisheries, tourism, and construction sectors in Turkey.

Direct Turkish investments in Greece, including the investments via other European countries, amount to approximately $500 million. Turkish investors mostly focus on investing in marinas, ports and the overall tourism sector in Greece. Furthermore, Ziraat Bank has branches in Athens, Xanthi, Komotini and Rhodes.

Foreign Economic Relations Board (DEİK) Turkey-Greece Business Council Chairman Tevfik Bilgen said although the situation in commercial relations between the two countries seems to be minimal, it is at a fairly good level compared to the beginning.

Pointing to a study conducted by the Greek government in 2015, Bilgen recalled that one-third of the 16,700 exporting companies started exporting for the first time in 2015, adding that it is possible to mention this statistical information for Turkey, albeit at a slightly different level. "There are still companies that have yet to put their products on the export markets in both countries," he added.

Highlighting the need to bring more business people from both countries together to develop economic relations and to find opportunities for collaborations, Bilgen added that Greece's greatest need is to increase industrial production.

Bilgen said the primary benefit of production will be to increase employment for both the Turkish investors and the Greek side. "Greece is still the country with the highest unemployment rate in Europe. The bureaucratic problems experienced by Turkish companies in Greece are expressed in every environment, and these obstacles are gradually eliminated over time," Bilgen continued. "Of course, these problems affect not only Turkish investors but also European investors. Turkish investments will increase as the obstacles are reduced and eliminated."

He pointed out that there are no political tensions between the two countries unlike the previous periods. "For the last 17 years, politicians have a fundamental appeal to the business world, 'You improve your business to some extent that we, politicians, have difficulty making unfavorable decisions,'" Bilgen said, underlining that there are many examples of the fact that relations between the countries, where mutual economic interests have developed, have even lifted political tensions over time.

Bilgen noted that today there is no political tension between the two countries, but the past still affects some circles.

"They may be bureaucracies or members of the business world, but we can be sure that everything will even further normalized over time. The business world is constantly contributing to this issue through business forums, meetings and mutual visits," he concluded.

The gross domestic product (GDP) of Greece, which has been struggling with the economic crisis since 2008, stands at about $200 billion.

In the country with a population of approximately 11.2 million, per capita national income is at the level of $18,366.

In Greece's GDP, the services sector has a share of 79.4 percent, followed by the industrial sector with 18.7 percent and the agricultural sector with 1.9 percent. The growth rate of the Greek economy, which shrank by more than 25 percent due to the crisis, displayed a stable outlook last year after catching a positive course in 2014.

In Greece, where the inflation rate is 1.1 percent, the unemployment rate remains at 21.6 percent.

almost half in 5 years

According to the data released by the Turkish Statistical Institute (TURKSTAT), the foreign trade volume between Turkey and Greece decreased by 47 percent from $4.9 billion to $2.6 billion in the five years covering the period of 2012-2016.

In the same period, Turkey's exports to Greece increased by 1.8 percent to $1.4 billion, while imports from this country dropped by 66.5 percent from $3.5 billion to $1.2 billion.

Regarding the items subject to foreign trade between the two countries last year, mineral fuels and oils led the way in Turkey's exports to Greece with $251 million, followed by plastic items with $101.8 million and motor vehicles, tractors, bicycles, motorcycles, other land vehicles and accessories with $95.1 million.

In terms of imports, on the other hand, mineral fuels and oils topped Turkey's imports from Greece with $502.7 million, followed by plastic items with $140.7 million and cotton and cotton yarn with $115.4 million.

While Turkey ranks fourth among the major countries exported by Greece, it ranks 12th in the country's imports.

Transport is another field where both sides are willing to intensify their cooperation. Currently, Turkish airline operators are conducting 49 flights a week between Turkey and Greece. The implementation of projects regarding the Izmir-Thessaloniki Ro-Pax ferry line and the high-speed train link between Istanbul and Thessaloniki will pave the way for an intensified cooperation in maritime and railroad transport between Turkey and Greece.