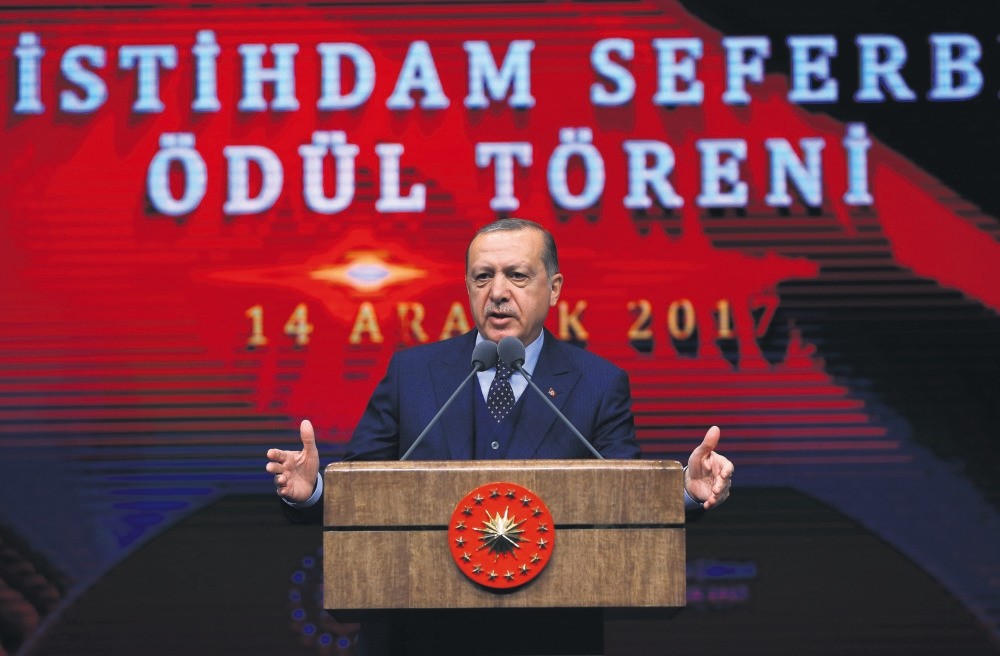 President Erdou011fan speaks at the First Employment Council at the Presidential Palace complex, Ankara, Dec. 14.
by Daily Sabah Dec 15, 2017 12:00 am

After last year's successful employment mobilization campaign which resulted in the creation of 1.5 million jobs, President Erdoğan renewed his call to Turkish businesspeople to continue to create for more jobs

Earlier this year, President Recep Tayyip Erdoğan launched an employment mobilization campaign in the Turkish Economy Council organized by the Union of Chambers and Commodity Exchanges (TOBB). After 10 months, President Erdoğan shared the results of that campaign by the Employment Council in the Presidential Complex for the first time, while renewing his call to Turkish businesspeople to add two more jobs. The president also elaborated on new incentives to support the country's employment.

Speaking at the First Employment Council, President Erdoğan pointed to Monday's data release, which revealed that the Turkish economy expanded 11.1 percent in the third quarter of the year and the average growth rate of the economy has hit 7.4 percent. The president reiterated his projection that year-end growth will close at 7.4 percent.

One of the foundational pillars of a growing economy is employment, Erdoğan said, "Growth that does not boost employment cannot be inclusive and sustainable," in a bid to underscore the importance of sustainable employment policy.

The president then recalled last year's employment campaign, which resulted in creating 1.5 million jobs in a 10-month period with the hard work of Turkish business circles. After a successful campaign, the president renewed his call to businesspeople at the meeting and asked them to add two more jobs. Last year, he asked businesspeople at the TOBB meeting to create one additional job.

"The government will sustain its incentives for those who add one more job in the upcoming period. I hereby ask our businesspeople to continue employment mobilization and provide two more additional jobs. Last year, TOBB asked its 1.5 million members to create one job, now we are doubling it because the growth of our economy has also doubled," Erdoğan said.

During his speech, the president elaborate on a comprehensive employment incentive package to be provided for enterprises. The first item includes a premium-indexed salary system. This means that the government will provide an insurance premium contribution for salaries up to TL 4,740 ($1,224) as part of the new additional employment program. Premium and tax support for all employees with insurance will continue for 12 months and figures will be adjusted to the new minimum wage. The president also indicated that this incentive program would continue until 2020.

"We have some good news for our tradesmen. Next year, while business owners will pay salaries, bonuses and taxes for one month at their establishment, the state will pay these costs for the other months for every additional job that a business with three or fewer employees provides," Erdoğan said, adding that the incentive will last throughout the year.

The president also said the Turkish Employment Agency (İŞKUR)'s "train your own worker" program will continue and last for six months, adding that the participants will be given TL 54 of pocket money per day.

He added the government would provide TL 400 in daycare support per month to mothers who have children aged between 2 and 5 and participate in on-the-job training programs and vocational training courses.

The president also said even if they start working, orphan benefits for those between the ages of 18 and 25 will not be cut off, and they will be able to continue to use their green passports.

"I also want to share the good news about the employment of those with disabilities. İŞKUR provides grant support of up to TL 36,000 to people with disabilities who have a disability report of at least 40 percent. We will increase this figure to TL 50,000 next year," President Erdoğan said.