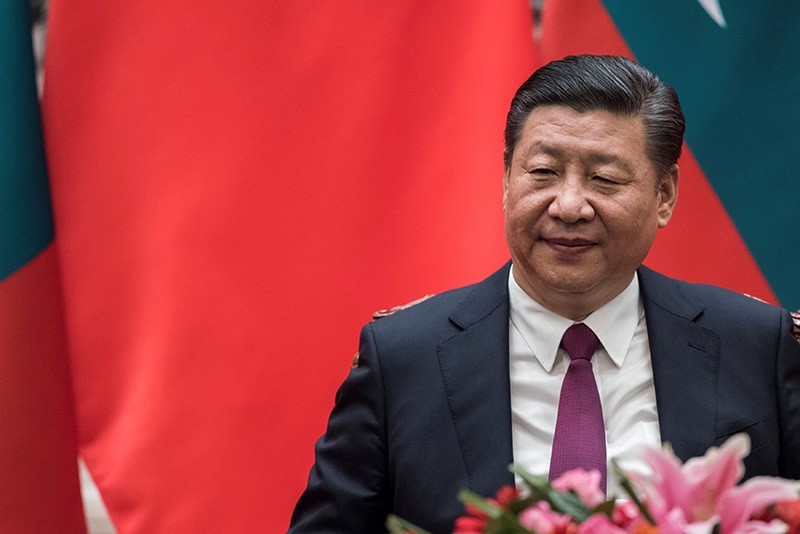 China's President Xi Jinping looks on during a signing meeting with Maldives President Abdulla Yameen at the Great Hall of the People in Beijing, China Dec. 7, 2017. (Reuters Photo)
by Dec 20, 2017 12:00 am

The pledges were made under a new banner, "Xi Jinping Thought on Socialist Economy with Chinese Characteristics for a New Era", at the end of the annual Central Economic Work Conference, during which leaders review past policy and plan for the upcoming year.

Xi is already seen as China's most powerful leader since Mao Zedong. The clear expansion of his portfolio into economics -- once seen as the purview of the country's premier -- is the latest sign of his ever-growing power.

The outcome of the three-day closed-door meeting was published by the state news agency Xinhua.

The report outlined China's new economic direction under Xi, building on his declaration at a party congress in October that the country must shift from an era of high-growth to high-quality development.

The economy is rebalancing away from the investment-heavy and export-dependent model that brought four decades of breakneck economic growth but left the country heavily in debt.

Though many analysts believe China's debt-dependent growth has reached a breaking point, Xinhua's report on the meeting noted no new projects to tackle the problem.

Instead the meeting called for continued credit expansion.

"The floodgates of monetary supply should be controlled, and credit and social financing should see reasonable growth," Xinhua reported.

The report did call for measures to tackle financial risk, but the apparently permissive credit policy flies in the face of increasingly dire warnings from foreign economists.

In October the International Monetary Fund warned that China's dependence on debt was growing at a "dangerous pace" and it must act to avert a brewing crisis.

Xinhua's report on this week's meeting made no mention of an official growth target for the year.

But earlier on Wednesday a state think-tank forecast growth slowing to 6.7 percent in 2018, from 6.8 percent this year.

The drive to boost imports and open China's market further could damp down a brewing trade conflict with the United States.

The meeting also stressed the need to "expand opening up to the outside world" and "substantially expand market access," it said.

Economic relations have been a particularly thorny issue under U.S. President Donald Trump.

His administration has launched a record number of trade investigations of Chinese goods and added new tariffs to Chinese-made imports like aluminum foil and plywood.

The import drive is also a nod to the need to get China's consumer class to start spending at home. The meeting noted that the country boasts the world's largest middle class.

Xi has indicated he is willing to accept lower growth as China tackles financial risk and heavy pollution, with analysts saying he emphasized the point by leaving growth targets out of his speech to party delegates in October.

"The key points are to win the battle for a blue sky, adjust the industrial structure and eliminate lagging production capacity," Xinhua said.

This winter China took the first steps in that direction, requiring steel factories and smelters to cut production -- with some running at half capacity -- in a drive to clean up the notoriously severe winter smog.

The measure, among others, has dented industrial output but given the capital a string of blue-sky days.

Along with pollution and imports, the government aims to control financial risk, encourage renting in the housing market, reduce poverty and protect private enterprise.