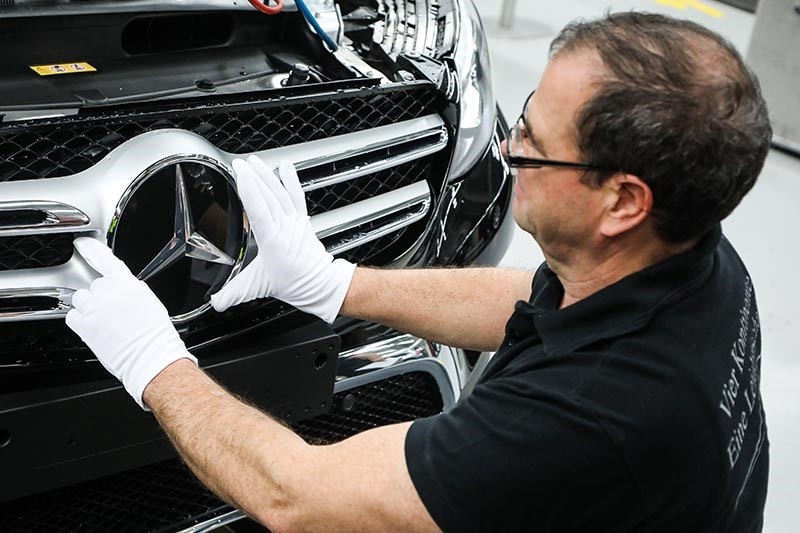 A worker attaches a Mercedes star at the C Class and GLC Class production line at the Mercedes Cars factory in Bremen, northern Germany, Jan. 24, 2017. (EPA Photo)
by Associated Press Jan 09, 2018 12:00 am

Unemployment across the 19-country eurozone fell in November to its lowest level in nearly nine years, official figures showed Tuesday, in the latest sign that the currency bloc's economy headed into the new year in robust shape.

Eurostat, the European Union's statistics agency, said the jobless rate adjusted for seasonal factors fell to 8.7 percent in November from 8.8 percent the previous month. That's the lowest rate since January 2009, when the eurozone was reeling from a deep recession following the global financial crisis.

The agency said the number of unemployed fell by 107,000 during the month, taking the total down to 14.26 million.

Unemployment across the region has been falling steadily over the past year as the eurozone recovery has gathered steam — figures later this month are expected to show that economic growth picked up in the fourth quarter, possibly to an impressive 0.8 percent. 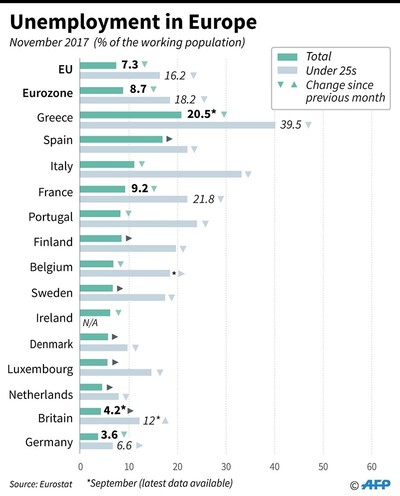 Though the unemployment rate has been on a downward trend in the eurozone, it remains more than double the U.S. rate of 4.1 percent. That's largely due to the fact that the recovery since the Great Recession has been far slower in the eurozone because the region also endured a debt crisis that led to many countries, notably Greece, enacting huge budget cuts.

Still, even there, there are signs of improvement. Spain's jobless rate, which in recent years stood at around 25 percent, is now down to 16.7 percent, while Greece's has been steadily falling, though still high just above 20 percent.

The hope among policymakers across the region is that the decline in unemployment will start to lift wages and boost spending, making the recovery self-sustaining and normalizing the eurozone economy following years of crisis.

So far, there's been little evidence that the steady fall in unemployment has done much to lift average pay rises in the eurozone but there are signs that that it will.

On Tuesday, Germany's largest industrial union, IG Metall, pressed its demands for higher pay rises so workers can share in the country's strong economic growth. The union has called for an inflation-busting 6 percent wage increase in the southern state of Baden-Wuerttemberg and started staging warning strikes to support the demand. Agreements in one state are typically replicated across the country, and this negotiation can set the tone for other sectors as well.

Economists think the typical dynamic by which lower unemployment leads to higher pay will return as the recovery becomes more self-sustaining and the fears related to the debt crisis start to fade from memory.

"With the percentage of companies mentioning the scarcity of labor as a factor limiting production now at the highest level since the start of the monetary union (in 1999), wage growth should start to pick up," said Peter Vanden Houte, an economist at ING.