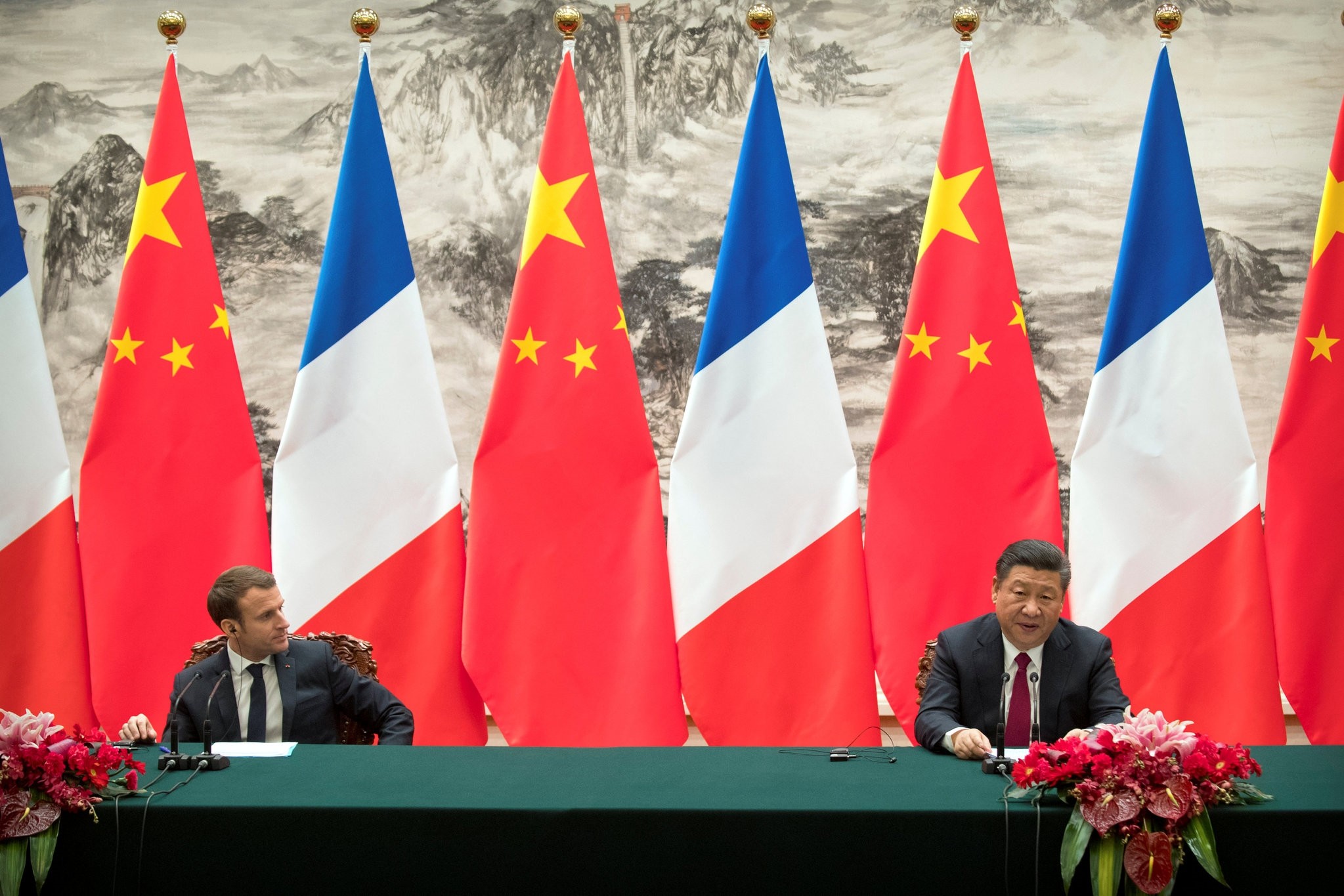 French President Emmanuel Macron, left, listens as Chinese President Xi Jinping speaks during a joint press briefing at the Great Hall of the People in Beijing, China January 9, 2018. (REUTERS Photo)
by Jan 09, 2018 12:00 am

Chinese President Xi Jinping and his French counterpart Emmanuel Macron oversaw the signing Tuesday of business deals worth billions of dollars, seeking better trade ties even as France's finance minister boasted of rejecting those investments he likened to "pillaging".

The two sides signed deals in the nuclear, aviation and other key sectors on the second day of Macron's first state visit to China.

Macron and Xi also vowed to keep up the fight against climate change -- a key pledge in the face of US President Donald Trump's vow to withdraw from the Paris accord.

Macron, who has positioned himself as the leading voice of the European Union, came to Beijing to discuss an ambitious agenda with Xi, the most powerful Chinese leader in decades.

"We are at a crucial point in the world," Macron said alongside Xi after overseeing the signing ceremony, pointing to the common challenges presented by climate change and terrorism.

The French leader said Xi agreed to work with France to prepare a spring conference on fighting terror financing, adding that they share the belief that "only a political settlement" of conflicts in Africa, Syria and Iraq can end this threat.

"We believe that this visit will enhance mutual trust and cooperation between our two countries," Xi said.

European aerospace giant Airbus announced an agreement with Chinese partners to increase production of its A320 jet in Tianjin to six aircraft per month. But it did not announce any new plane orders from China.

Macron, accompanied by some 50 French business leaders, has laid on the charm during his visit, giving Xi a horse from the Republican Guard as a gift. He also delighted Chinese social media users by releasing a video of him learning to say his climate slogan -- "Make the planet great again" -- in Mandarin.

But France, which runs a $30 billion euro ($36 billion) deficit with China, wants to "rebalance" its trade relationship with Beijing and, like other European nations, has demanded reciprocal access to the huge Chinese market.

US and European firms also complain about being forced to hand over intellectual property secrets in order to gain market access.

French Finance Minister Bruno Le Maire, who travelled with Macron, told reporters he has rejected "many" Chinese projects in France.

In a keynote speech on Monday, Macron urged the EU to take part in Xi's Silk Road initiative, though he warned that it should not create a "new hegemony" for Beijing.

On Tuesday, Xi said the project "doesn't belong to just one country", though he acknowledged that it "reflects the Chinese vision of global governance".

It is the first state visit by a European leader since China's Communist Party congress in October, which further strengthened Xi's grip on power. He was formally handed a second term and his name was enshrined in the party's constitution.

Beijing has praised Macron's decision to choose China for his first state visit to an Asian nation. US President Donald Trump visited the Chinese capital in November and was given a lavish welcome.

Earlier, Macron and his wife were accompanied by students from the French international school and a French historian as they strolled through the red-walled palaces of former Chinese emperors at the Forbidden City.