Brexit may cause over half a million job losses in UK, Germany, study says 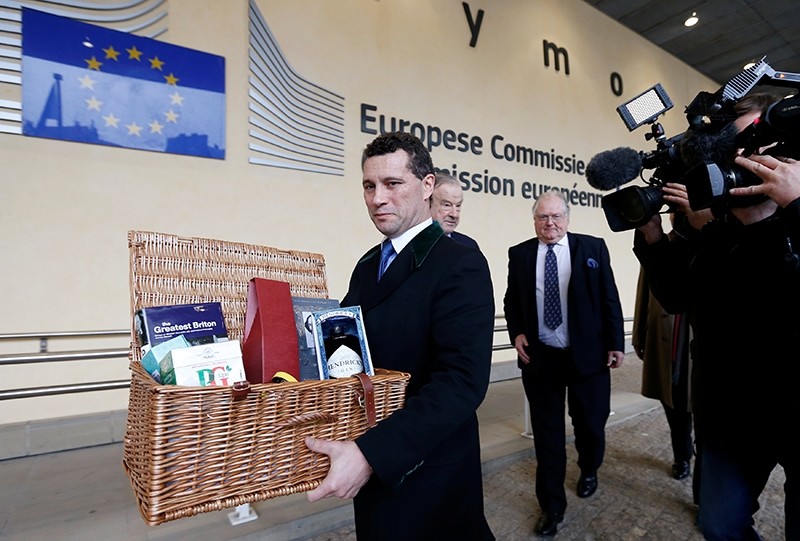 Member of the European Parliament (MEP) Steven Woolfe holds an hamper with British products as he arrives for a meeting with European Union's chief Brexit negotiator Michel Barnier (unseen) at the EU Commission headquarters (Reuters File Photo)
by Compiled from Wire Services Jan 11, 2018 12:00 am

A study commissioned by London Mayor Sadiq Khan shows that almost half a million jobs are under threat if Britain fails to strike a deal on future relations with the European Union before it leaves the bloc.

The research released Thursday warns of a "lost decade" of significantly lower economic growth resulting in 482,000 fewer jobs and 50 billion pounds ($67 billion) of lost investment by 2030 if the worst-case scenario becomes a reality.

Khan urged Prime Minister Theresa May to ensure Britain avoids this outcome by negotiating "a deal that enables us to remain in both the single market and the customs union."

Khan says the analysis shows "the harder the Brexit we end up with, the bigger the potential impact on jobs, growth and living standards."

Meanwhile, a study by accounting firm Deloitte showed that "hard Brexit" involving tariffs and a lasting devaluation of the pound could also cause thousands of job losses at German automotive suppliers.

An arrangement where Britain gives up full access to the single market and customs union could threaten as many as 14,000 jobs at automotive suppliers in Germany and shrink their sales by 3.8 billion euros ($4.54 billion), the study published on Thursday found. Britain will leave the European Union in 2019.

Germany is the largest exporter of car parts to the U.K., with companies such as Continental and Robert Bosch providing nearly a fifth of all components used in UK-based car production.

Some 42,500 jobs in Germany depend on suppliers' ties with Britain and German parts makers generated 16.9 billion euros in sales in 2016 from U.K. car production, the study said.

"Trade barriers emerging in the course of Brexit such as tariffs or regulation would considerably harm supply chains and raise the costs for suppliers," Thomas Schiller, head of automotive at Deloitte, said.