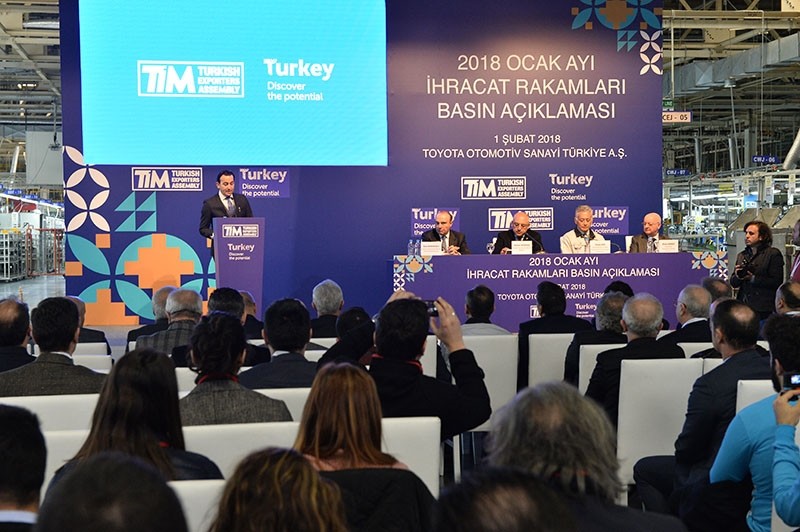 Turkey's exports soared by 16.3 percent in January compared to the same month last year, reaching around $12.2 billion, the Turkish Exporters Assembly (TİM) announced yesterday. Thus, January of this year was the best third January of all time in terms of export volume, TİM said.

"Turkey's 12-month exports have exceeded $158 billion. We will overcome the $160 billion target in one to two months, and we will surpass $170 billion at the end of this year," TİM Chairman Mehmet Büyükekşi said in a statement.

"As promised, we started with a double-digit increase in the 'Year of Records in Exports.' Our exports in the last 12 months also increased by 10.1 percent compared to the previous year and hit $158 billion," the TİM chairman said in the meeting.

Evaluating the effect of the euro/dollar exchange rate changes on exports, Büyükekşi emphasized that the increase in the euro/dollar parity in January affected Turkey's exports positively with a magnitude of $842 million.

"We expect the exchange rate to increase by 1.20 percent throughout the year and therefore, the increase in the parity will affect our exports positively in the following months as well," he added.

It was reported that exports of the largest exporting sector, automotive, increased by 10.8 percent, reaching $2.27 billion in January, followed by the apparel sector ($1.43 billion) and the chemicals sector ($1.35 billion). The olive and olive oil sector experienced the highest increase in exports in the said month with an increase of 153 percent, the statement said, followed by leather and leather products, and the machinery and accessories sectors with an increase of 42.3 and 32 percent, respectively.

In terms of export markets, TİM reported that exports to 161 countries experienced an increase in January. Among the top five export markets, exports to Germany increased by 18 percent, while exports to the U.K., Italy, the U.S. and Spain were up by 11.4, 17, 20.4, and 30.9 percent, respectively.

The highest increase among the top 20 export countries was recorded in Greece with 79.9 percent, while exports to the EU saw an increase of 22.6 percent. The share of the EU in exports in January increased to 52.6 percent.

TİM Chair Büyükekşi emphasized that they have developed an "Export Information Platform" system under the auspices of the presidency, suggesting that, with just one click, they will be able to see which countries Turkey exports to.

"It is a system that responds to many questions such as which countries have import potentials, which markets are more suitable for us, how to get to the right company in the market, customs taxes and logistics costs, and how our government provides support," Büyükekşi said.