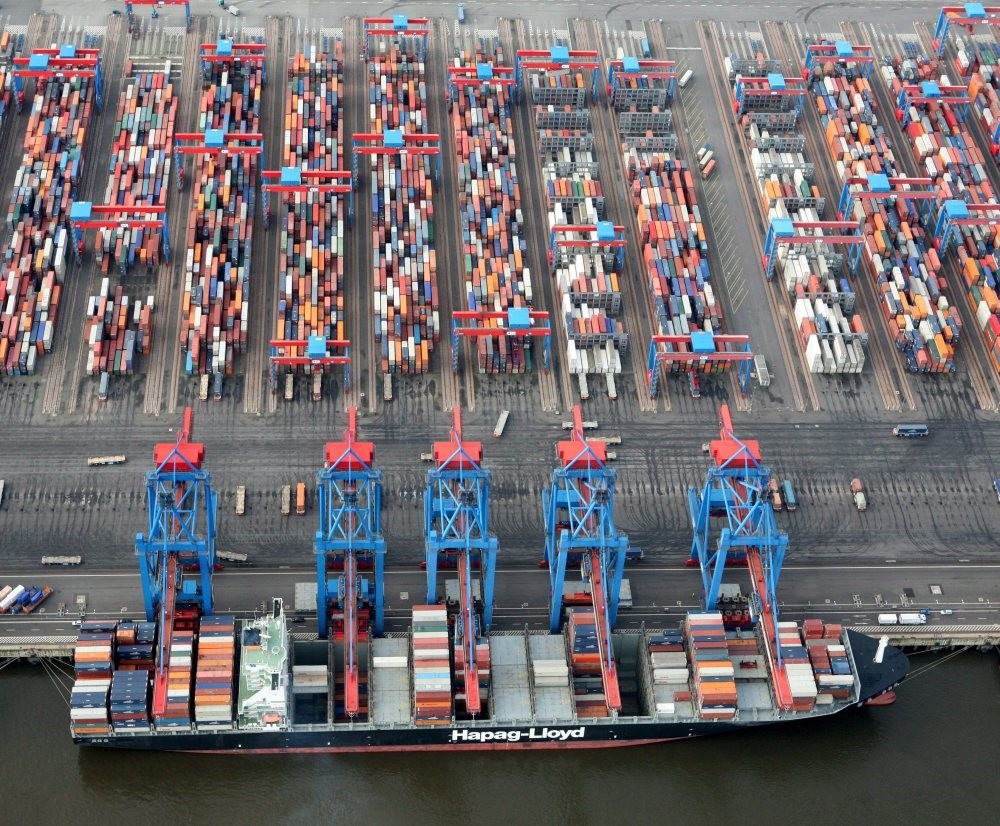 A container ship in a seaport in Hamburg, Germany. As the EU experienced 2.5 pct growth in 2017, the highest in a decade, rising economic momentum is expected to result in an increase in the blocu2019s demand for Turkish goods and services in the future.
by Daily Sabah with AA Feb 03, 2018 12:00 am

Outstanding growth in the eurozone brings good news for Turkish exports, which make significant contributions to the country's growth since European demand for Turkish goods is also expected to rise in line with growth in the single-currency area

Two economic partners with growing trade volume, Turkey and the European Union (EU) are expected to benefit from the expanding bilateral trade in the upcoming period with strong economic growth data in the eurozone and Turkey.

After the Eurozone achieved the fastest growth rate of the past decade in 2017, there is an increased expectation that the demand rise in Europe will support Turkey's exports. Economic growth in the eurozone reached the highest in a decade, at 2.5 percent last year.

The rising economic momentum has also boosted expectations that Europe's demand for goods and services from Turkey will increase in the upcoming period.

Angel Talavera, the Lead Economist at London-based Oxford Economics, stated that Turkey will be one of the countries that will benefit the most from Europe's economic growth, stressing that it is certainly good news for Turkey that the European economy has started to rise again. Talavera continued, "This will provide considerable support to Turkey's exports. The external environment will continue to be extremely positive for Turkey this year as it was last year."

Stressing that the Eurozone's 2.5 percent growth is above the region's potential growth, Talavera noted that a sustainable growth of nearly 2 percent in the Eurozone is expected in the upcoming period. "According to what we have now, we are in the middle of the economic cycle in the Eurozone. We are optimistic that economic growth can continue for a few more years," he added.

In 2017, more than half of Turkish exports, which totaled to $157.1 billion, went to the 28 EU countries and the union has received Turkish goods worth $73.94 billion, according to the data provided by the Turkish Statistical Institute (TurkStat). As much as the EU is a perfect destination for Turkish goods, Turkey is also an indispensable market for EU exports as the country ranks among the top five destinations for EU goods. Last year, the value of exports from 28 EU countries to Turkey amounted to $85.2 billion dollars.

The main risks for the Eurozone continue to be political

Talavera said that the strong economic growth trend in the Eurozone could boost the speed of implementing economic reforms in the region and strengthen the region's resistance to possible shocks.

Referring to possible future risks in the Eurozone, Talavera stated that the main risks for the Eurozone remain political, with the most important risks being the results of the elections in Italy and the possibility of the U.K.'s secession from the EU without an agreement (a harsh Brexit scenario.)

A report released by the international credit rating agency Moody's last month showed that economic recovery in the Eurozone supports the 2018 outlook despite the irregular structural reform program.

The report revealed that the economic growth of the Eurozone will be 2 percent on average this year, continuing, "The domestic demand supports the upside potential of growth in Germany, France, Spain and Italy. When we look in general, even though growth remains relatively light compared to the

pre-crisis period in the Eurozone countries, the region is experiencing a productive cycle of rising employment, strong household spending and growing investments. Growth in the region's countries this year will be broad-based with all demand components."