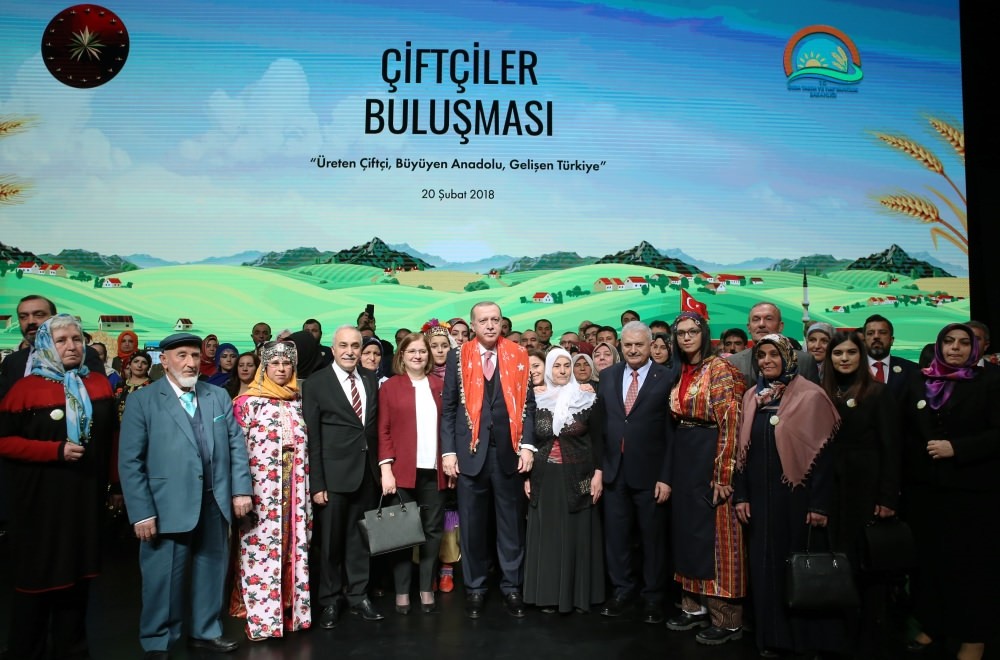 President Erdou011fan (C) met with the farmers from across the country at the Presidential Palace Complex and announced a number of incentives to support agriculture and livestock breeding, Ankara, Feb. 20.
by daily sabah Feb 21, 2018 12:00 am

In a bid to support Turkey's livestock and agriculture, the government has launched an expansive incentive program for farmers to reduce food imports and facilitate farmers' access to financial tools

Turkey's goal to become one of the 10-largest global economies has led to the launch of a new set of programs for industry and agriculture. Recently, the government has taken major steps to improve livestock and agriculture in Turkey. As part of this expansive program, organic agriculture will be supported with government incentives and farmers will be provided low-interest loans. The overall purpose of the program is to nurture agriculture in the country as the population continues to increase and reduce the share of imports.

In a ceremony to announce the new agricultural support program, President Recep Tayyip Erdoğan elaborated on agricultural developments over the last 15 years and disclosed the details of the support package.

"The rise and the fall of countries begin with agriculture. Therefore, the road to a powerful Turkey passes through a strong agricultural sector," Erdoğan said at the ceremony held at the Presidential Palace complex.

In a bid to emphasize the importance of agricultural for development, Erdoğan said that the food and agricultural sectors are just as important as the defense industry for a country.

Stressing the significance of the agriculture sector on the agenda of the governments over the past 15 years, he said that the incentives provided to farmers were TL 103 billion ($27.2 billion). While the annual support for farmers was TL 1.8 billion in 2002 when the Justice and Development Party (AK Party) took power, the current annual amount is TL 13 billion, Erdoğan said.

Since diesel is one of the inputs that increase the cost of production for farmers, the government has launched a support program covering fuel. "As of Feb. 23, the government will compensate half of the diesel expenditures of farmers," he said.

Agriculture is one of the sectors that experiences fierce competition, the president said. For livestock breeders who want to receive agriculture l

oans, the government will facilitate the use of loans through the General Directorate of Agricultural Enterprises (TİGEM) from state lender Ziraat Bank for the purchase of up to 300 sheep.

With this program, the government ensures the purchase and the farmers will not have to pay back the loan for the first two years. The whole loan will be paid back in a seven years. Those who apply to this program will also receive a monthly minimum wage.

The president also announced that modern irrigation systems will be installed on 8.5 million hectares.

Fourteen new research centers will be established to concentrate on the production of certified products. The high added-value products will be supported with the prioritization of biotechnology research, protection of gene resources and nanotechnology activities.

Breeding activities will be increased for production for high yields and returns. In order to obtain pure breeds that are resistant to disease, breeding training will be given to farmers.

Wastewater released into the Mediterranean will be directed to the Konya Plains to save water. For the Konya Plains project, 9 million square meters of land will be irrigated. With of TL 5.7 billion provided within the scope of the Eastern Anatolia Project, income and employment increase will be achieved in the region.