Turkey a gateway to Europe for modern Silk Road 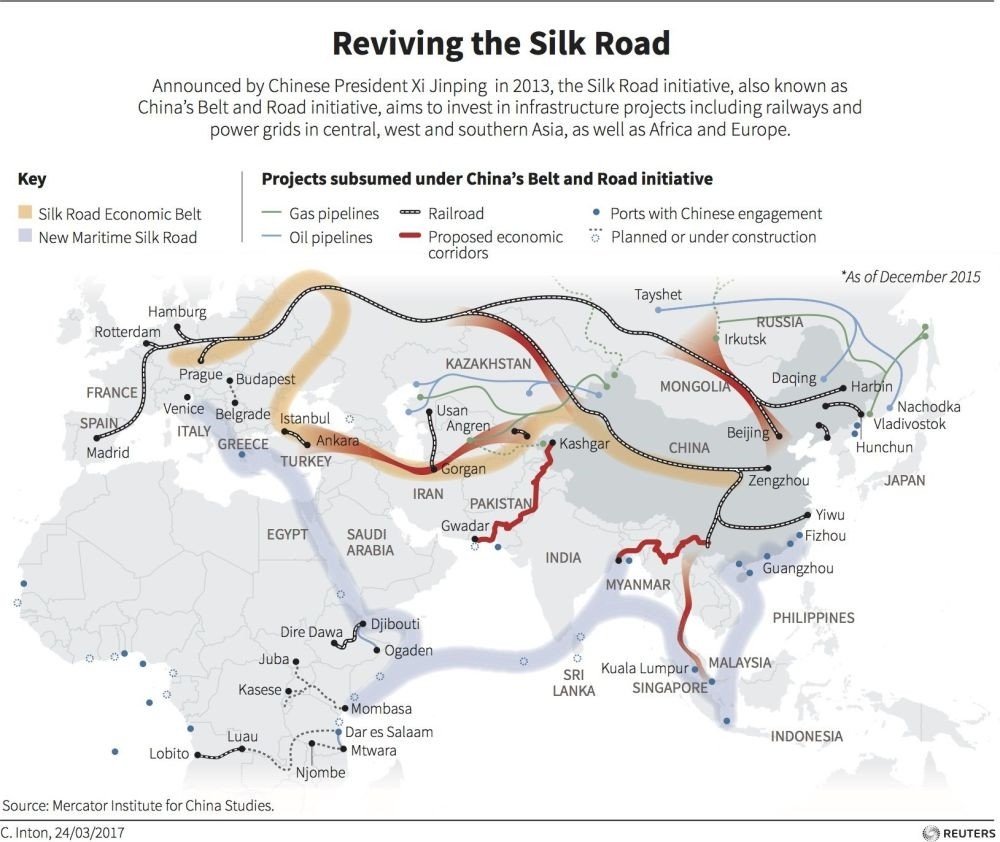 Turkey is seen as a gateway to Europe for the modern Silk Road, also known as the Belt and Road Initiative, which covers China, Kazakhstan, Caspian Sea, Azerbaijan and Georgia.

In 2013, Chinese President Xi Jinping announced the Belt and Road Initiative to build a trade and infrastructure-based network, connecting Asia with Europe and Africa along the ancient Silk Road trade routes. "One Belt, One Road," refers to the "Silk Road Economic Belt," which recreates the ancient, land-based Silk Road trade routes from China across Central Asia, into to the Middle East and Europe, also known as the "Modern Silk Road."

The route of the modern Silk Road starts in China and passes through Kazakhstan, the Caspian Sea, Azerbaijan and Georgia and will extend to Europe via Turkey, which constitutes one of the main corridors of the project, called Trans-Caspian Corridor. Also covering the Baku-Tbilisi-Kars (BTK) Railway, a key to the Silk Road project expected to carry nearly 1 million passengers and 6.5 million tons of freight annually before unlocking a freight transportation potential of up to 50 million tons per year, the corridor will facilitate freight and passenger transportation from China to Europe, and Russia to South Asia and Africa.

With the involvement of committee members, an international association for the Trans-Caspian International Transportation Route was formed last year. Turkey became the permanent member of the committee with a protocol signed last week.

Association Chairman Kanat Alpysbaev said the Trans-Caspian corridor was completed with the launch of the BTK Railway.

Underscoring the importance of Turkish State Railways' (TCDD) participation in the committee, Alpysbaev informed that the amount of freight transported on the Trans-Caspian corridor will jump to 4 million tons this year from last year's 2 million tons. This target will be achieved easily with Turkey's membership, he said and added that 1 million of freight is expected to be transported through Turkey per year.

Alpysbaev informed that Turkey ensures the connections to theTrans-Caspian corridor since the country is strategically located and close to the Caucasus and Central Asia.

"A large portion of the 4 million tons of freight to be transported on the Trans-Caspian corridor will be composed by Kazakhstan's wheat products. The corridor will also be used for the transportation of coal and metal products. From Turkey, textile products and construction materials will be transported," the chairman said.

Trans-Caspian International Transport Route International Association Vice Chairman Javid Gurbanov said with the realization of permanent membership of Turkey for the Trans-Caspian route, also known as the Middle Corridor, fellow countries will be united by rail. Pointing out that China and Europe will be united via Turkey, Gurbanov said the transport has begun through Turkey.

TCDD General Director Veysi Kurt said the Trans-Caspian transport corridor constitutes a significant part of the line known as the historical Silk Road, which runs from China to Europe.

Stressing that Turkey will now have a say in the international association consisting of rail and port authorities over the corridor as well as the ship management authorities on the Caspian Sea, Kurt said international logistics and transport serving a very important hinterland ranging from China to Europe and from Russia to South Asia and to Africa can be carried out on the corridor.

Kurt noted that over 100 million tons of freight are ready to flow through the corridor, adding that the said transport will be realized after completion of the logistics service on the railway line.