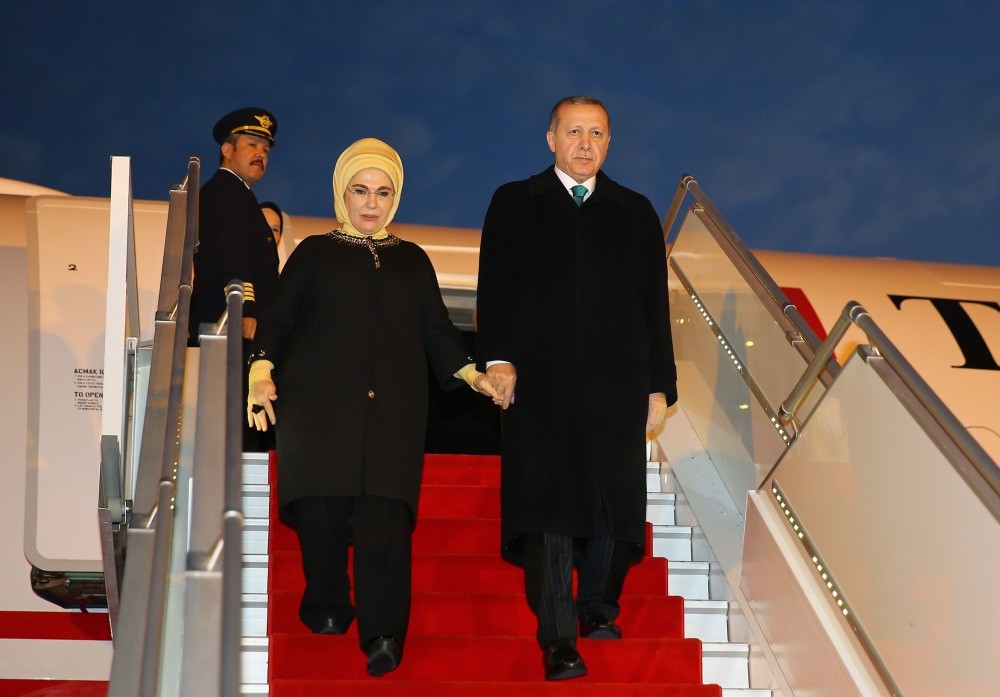 President Erdoğan's five-day, four-country trip to Africa, which continues with a one-day visit to Senegal today, showcases Turkey's dedication to its African initiative program with a focus on improving bilateral economic ties with African countries

President Recep Tayyip Erdoğan arrived in Senegal late Wednesday on the third stop of his five-day, four-country Africa trip. During his one-day stay in the country, which is seen as a gateway to West Africa due to its geographical position, President Erdoğan is expected to hold talks with his counterpart Macky Sall and discuss bilateral ties and cooperation. Accompanied by a group of 200 businesspeople, President Erdoğan will attend the Turkey-Senegal Business Forum, during which agreements are expected to be signed and steps toward improving commercial and economic ties will be discussed. High-level visits from Turkey to African countries have shown Turkey's dedication to its African Initiative program, which has profoundly transformed political and economic ties with African countries.

Over the last 10 years, President Recep Tayyip Erdoğan has paid more than 30 visits to 28 African countries – the most of any Turkish president. President Erdoğan also visited Senegal in 2013 and 2016.

On this trip, he will have visited Algeria, Mauritania, Senegal and Mali in five days once he finishes.

Within the scope of Turkey's Africa Initiative, the country's trade volume with the continental countries increased by six-fold in the last 15 years, reaching $17.5 billion.

Turkey's 15-year Africa Initiative Policy has increased economic cooperation and it has also taken political relations to the next level.

For example, the foreign trade volume between Turkey and Senegal in 2017 was $248.6 million, while the same figure stood at $91.8 million in 2008, according to Turkish Statistical Institute data.

The experience of Turkish businesspeople has been transferred to the region and it has contributed to the development of African countries. Economic relations have been diversified with a "win-win" approach.

Foreign Economic Relations Board (DEİK) Turkey-Senegal Business Council Chairman İhsan Şahin pointed out that Senegal was a member of the Economic Community of West African States (ECOWAS) and the West African Economic and Monetary Union,

Speaking ahead of President Erdoğan's visit to Senegal, he indicated that the country could take on the central role of commerce in West Africa as well as in North Africa for Turkish investors.

He added that monetary policies of the country being carried out by the Central Bank of the West African Countries and the use of common currency in the region was one of the most important elements facilitating the trade to be made after the investments are carried out.

He emphasized that a request for a land acquisition for Turkish Business Center in Senegal was submitted, stating that goods exported by Turkish businesspeople could be exhibited and sold, and that there would be hotels, hotels, offices and meeting halls within the scope of the center.

Senegal is one of the most economically and politically stable countries in Africa, Şahin said. "The natural gas reserves in Senegal have drawn the attention of the whole world to this country. Issues such as deduction of this gas, power plants, storage and distribution systems can develop important projects between the two countries in the medium and long term."

"Also, there is an important business potential in solar energy field in Senegal, where new investments are being made, that can be realized by mutual cooperation of the two countries," he continued. "The construction of energy transmission lines that could carry the energy produced in Senegal, which is a candidate to become the region's energy basin in the future, to other countries is another important business development area."

Apart from this, Şahin said, there are significant opportunities and possibilities in health, textiles, food and animal husbandry fields that could contribute to the improvement of the trade between the two countries.

He also pointed out that Turkish contractors were ready to undertake important projects regarding the infrastructure investments that are essential for Senegal's development.

Şahin concluded that President Erdoğan's visit will contribute to the increase in the bilateral commercial and economic relations.

Ankara sees the relations with Dakar as a "strategic partnership," Turkish Ambassador to Senegal Nihat Civaner said, adding that they have rapidly covered distance in this direction.

Civaner said he expects a "leap" in the bilateral relations during Erdoğan's visit and added that several agreements will be signed to improve the ties.

He said it was "not surprising" to see how Turkey has a strong presence in Senegal.

The ambassador said the Turkish Cooperation and Coordination Agency (TİKA) has been very active in Senegal for many years and it carried out projects worth around $12 million in last 10 years.

According to DEİK data, Senegal ranks second after Ivory Coast in terms of the level of industrial development among the French-speaking West African countries.

Natural resources are rather limited in Senegal, whose economy is based on agriculture. A total of 70 percent of the country's labor force is employed in the agricultural sector.

According to 2016 figures, Senegal's gross domestic product (GDP) was $12.1 billion and its gross national product per capita was $774.

The Turkish-Senegalese relations go back to the 1960s when Senegal declared independence. The two countries have embassies in each other's capitals. There are reciprocal visits between the two countries at the level of presidents, prime ministers, foreign ministers and other ministers.

The regular flights offered by Turkish Airlines (THY) to Senegal also contribute to the improvement of relations between the two countries.

During Erdoğan's visit to Algeria on Tuesday, two Turkish firms inked a $1 billion agreement with Algeria's state-owned energy and chemicals group Sonatrach to establish a polypropylene production plant in the Yumurtalık district of Turkey's southern province of Adana.

Erdoğan said that Turkey and Algeria have a bilateral trade volume of $3.5 billion and that it needs to be raised to $5 billion at first and then to $10 billion. To achieve that goal, he said energy cooperation is the most important and requires immediate action.