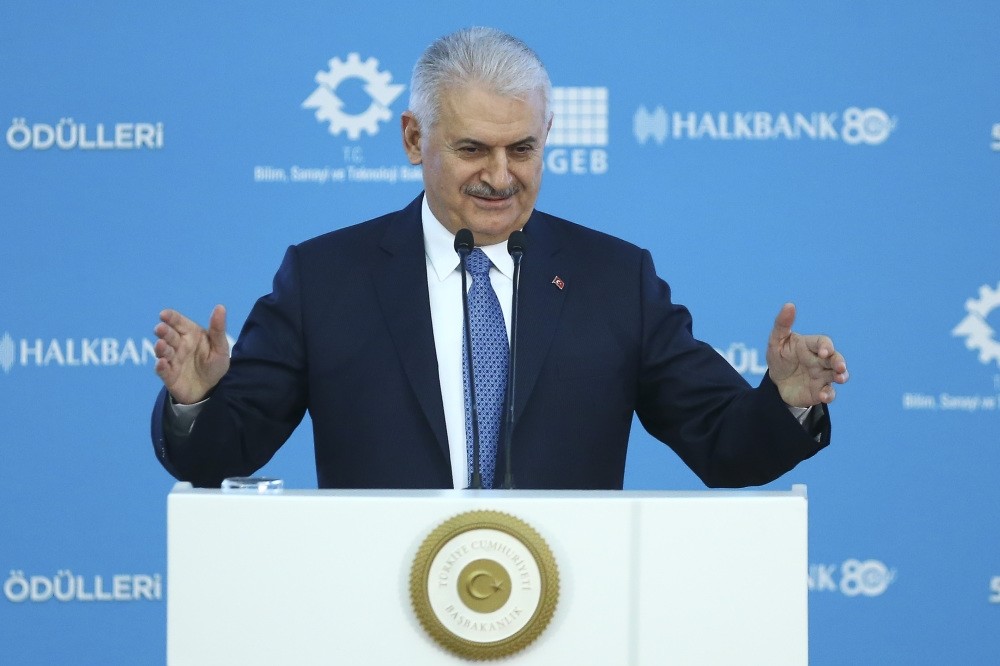 Prime Minister Yu0131ldu0131ru0131m delivers a speech at the fifth SME and Entrepreneurship Awards Ceremony held at the helm of the Small and Medium Enterprises Development Organization (KOSGEB), Ankara, March 1.
by Daily Sabah with Wires Mar 02, 2018 12:00 am

Government funds used to support small and medium sized enterprises have topped TL 5.3 billion as of 2018, Prime Minister Yıldırım said while explaining the details of a new support program

Prime Minister Binali Yıldırım announced a new support program for small and medium sized enterprises (SMEs) and assessed the value-added taxes (VATs) to be paid back to the enterprises in accordance with the new draft law. Speaking at the fifth SME and Entrepreneurship Awards Ceremony held at the helm of the Small and Medium Enterprises Development Organization (KOSGEB), Yıldırım said that a total of 9,631 new companies were established across Turkey in January 2018, 61 percent more compared to the previous month. Underlining that SMEs are the "unsung heroes" of Turkey, Yıldırım noted that such enterprises constitute 56 percent of the country's overall employment.

Indicating that SMEs employ more than half of the 29 million employees, the prime minister said the number of "glorious" companies has not exceeded 1 percent of total enterprises.

Yıldırım stressed that SMEs have a great part in Turkey's growth and that the government has always stood by these enterprises.

Referring to the fact that more than 99 percent of enterprises in Turkey are SMEs, he said, "You fulfill a large portion of Turkey's production, employment and exports. One of the two structures that localize the investments that contribute to the development of the industry in our country is KOSGEB and the other is organized industrial zones. We have made important decisions about nationalization and localization with a circular we have issued recently."

"This can be achieved by boosting exports on the one hand, and satisfying the need for the imported intermediate goods within Turkey on the other. We will continue to provide all kinds of incentives for localization and nationalization," the prime minister added. He emphasized that KOSGEB serves in all provinces of Turkey and that the number of organized industrial zones has doubled since 2002.

Pointing out that KOSGEB is one of the pioneering organizations in economic life, production, and employment, Yıldırım emphasized that the development of entrepreneurship culture and the increase of competitiveness of SMEs are priority targets of the government.

He highlighted that the Justice and Development Party (AK Party) governments have significantly increased KOSGEB incentives and the support given to small and medium-sized investors surged to TL 5.3 billion ($1.4 billion) in 2018 from TL 14.5 million in 2002.

The prime minister advised to turn toward products that are "light in weight but heavy in value," reminding that they removed VAT from the purchase of machinery and equipment.

Yıldırım continued, "The definition of SMEs is changing. In order for more entrepreneurs to take advantage of incentives, we will upgrade the upper limit to TL 125 million from TL 40 million currently."

Recalling that they had previously announced the SME Development Support Program and SME Techno Investment and Strategic Product Support Program, Yıldırım stated that these programs will help provide jobs for some 5,000-6,000 people in enterprises.

"Moreover, we will provide certain amounts of nonrepayable incentives to enable enterprises to produce value-added products with other programs," he added.

Touching on the Strategic Product Support Program, Yıldırım expressed that the aim is to improve domestic and national production.

"Enterprises will benefit from these incentives as long as they produce import products that push up our current deficit and foreign trade deficit. The incentives and upper limit will be the same as the SME Techno Investment Program. These programs have attracted great interest since they were announced. A total of 1,722 enterprises have applied so far. At the moment, 294 enterprises have completed the application process. Thanks to these programs, we will have the opportunity to produce import products with domestic resources," he said.

According to the prime minister, the SME Development Support Program will support 2,049 enterprises with TL 534 million. The program will also create an investment volume of nearly TL 1.3 billion and provide jobs for some 5,000-6,000 people.

The SME Techno Investment and Strategic Product Support Program, which was announced by Yıldırım during a parliamentary group meeting in October, will support enterprises to be able to produce products with high value added and a high technology level.

If they invest in technological production, they will receive 100 percent support, with 70 percent nonrepayable and 30 percent repayable. With a 5 million upper limit, enterprises can receive incentives in line with their scale and power. However, it can go up to TL 10 million in case of major projects.

Touching on the VAT draft law that has been sent to Parliament, Yıldırım noted, "We are radically changing the 33-year VAT law. Actually, this is not a change, but a reform."

According to the draft law, the state will repay the accumulated VATs to enterprises in line with a certain schedule. If VATs are not paid within three months from now on, the state will pay interest for the unpaid time.