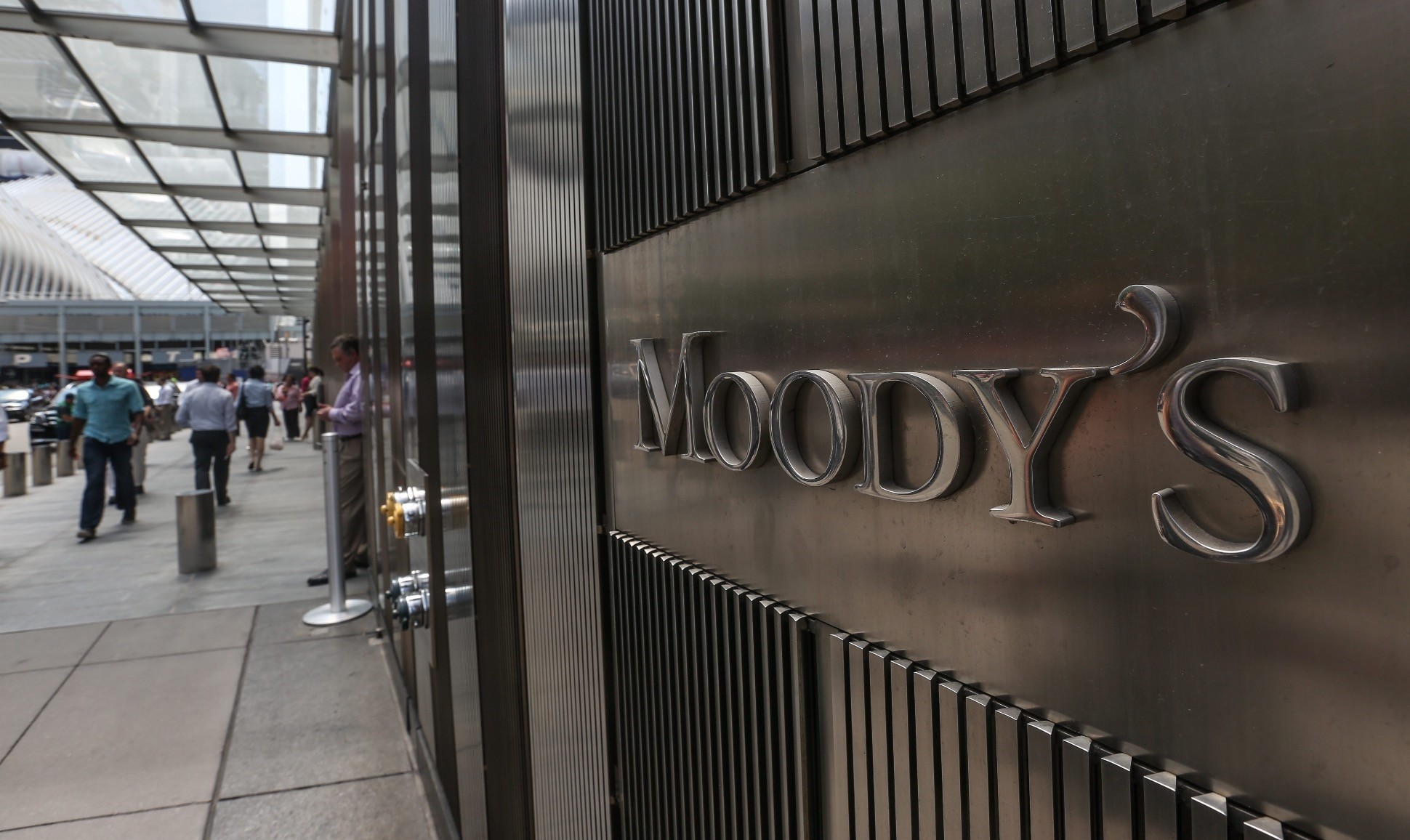 A Moody's sign on the company's corporate headquarters in New York City.
by Daily Sabah with Wires Mar 09, 2018 12:00 am

On Wednesday night, Moody's downgraded Turkey's credit rating, but it seems to have failed to sway Turkish markets, as apparent in the country's macroeconomic indicators

The U.S.-based credit rating agency Moody's lowered Turkey's sovereign rating one notch to Ba2, leaving the nation on par with Brazil, Croatia, Georgia, Azerbaijan and Costa Rica while leading to an assumption that economic indicators suggest otherwise and the decision is based on "political" motives. In a statement, the U.S.-based agency said the main reason behind its decision was the "continued loss of institutional strength" and "increased risk of external shocks." Since these reasons were also included in Moody's earlier rating assessments, analysts said it is now a well-known fact that credit agency ratings are based on "political" reasons.

Analysts point out that no reaction was observed on both the stock exchange and the foreign exchange side in the markets.

Given the International Monetary Fund's (IMF) economic forecasts for the past year, Turkey's divergence from the countries in the same group proves that Moody's decision is based on political reasons rather than economic ones.

In the Moody's rating scale, the countries in the group of non-investment and speculative level, which also includes Turkey, are represented with Ba1, Ba2, and Ba3 ratings. In Moody's credit rating notches, B1, B2, and B3 ratings right under Ba3 indicate highly speculative level.

Among the countries Moody's rated in the speculative level group are Russia, Portugal, Namibia, Guatemala, Paraguay, Morocco and Trinidad and Tobago, with a Ba1 rating.

Accordingly, in the speculative level group, eight countries rated better than Turkey, while seven were represented with lower ratings and five shared the same ratings with Turkey.

IMF data, however, noted that many countries in the group, with a higher (Ba1) rating than Turkey, cannot match Turkey's level in terms of macroeconomic indicators. According to its recently announced data, Turkey is also economically diverged from the countries with the same rating. Hence, Moody's revised Turkey's growth forecast for this year from 3.2 percent to 4.0 percent on Feb. 27, 2018.

"This revision reflects the view that the government will continue to take fiscal measures to keep economic growth high prior to the 2019 presidential elections in November," the agency said in a statement. In its assessment of Feb. 23, the credit rating agency reported that among the 22 emerging economies, Turkey comes fifth with the least public debt right after Russia, Bulgaria, Chile and Peru.

According to the IMF's 2017 estimates, Turkey's growth will be higher than that of Georgia, Costa Rica, Croatia, Brazil and Azerbaijan. Predicting that Turkey will grow by 5.1 percent in 2017, IMF said that growth the figure will be 4 percent in Georgia, 3.8 percent in Costa Rica, 2.9 percent in Croatia, 0.7 percent in Brazil, while Azerbaijan's economy is projected to shrink by 1 percent.

In terms of the size of the economy, only Bulgaria outscored Turkey last year with $841.2 billion. Turkey was followed by Costa Rica with a Gross Domestic Product (GDP) of $58.9 billion, which shows that Turkey's economic size is approximately 14 times larger than its closest rival.Meanwhile, there was a limited reaction from Turkish assets. The lira dropped to 3.8115 against the dollar by 12:10 p.m. from 3.8035 at the close yesterday. The main Istanbul share index BIST 100 edged 0.1 percent lower. The 10-year benchmark bond yield rose to 12.29 percent from a close of 12:20 p.m.

"The mentioned risks are not new to the market and the focus is mostly on global risk sentiment rather than local developments," BNP Paribas/TEB strategist Erkin Işık told Reuters.

Economists said the international credit rating agency Moody's statement on Turkey's credit rating was not expected by the market.

In an exchange with Reuters, one banker described the downgrade as a "surprise development" that could put some pressure on Turkish markets during the day, although he said there was no real fundamental difference between a Ba1 and Ba2 rating.

"I think this decision reflects the course of Turkey-U.S. relations, as we are not in a different place in an economic sense from where we were a year ago," said the banker, who declined to be identified.In a written statement, Istanbul Chamber of Commerce (ICOC) Chairman Öztürk Oran assessed Moody's decision on Turkey's credit rating.

"Those who see that 80 million people are united to eliminate the terror that is trying to settle on their border took up arms once again with credit rating. In this big ruse, it is now Moody's turn ... But their weapons once again backfired. The markets are the proof," Oran said.

QNB Finansinvest Chief Economist Burak Kanlı said that the decision came as a surprise and noted that the period when the credit rating agencies mattered was now over.

ÜNLÜ&Co Economist Esra Şimşek, on the other hand, said Moody's had not announced a date for Turkey's credit outlook, so Moody's decision was not in line with the expectations.

Şimşek recalled that Turkey does not have "investment" rating from any of the current major credit rating agencies. Stressing that no big reaction has been observed in the foreign exchange following the decision. She said the downgrade will have a limited effect on the markets.

With regards to the share of total investments in national income, Turkey comes second right after Azerbaijan with a share of 29.6 percent.

In terms of public debt indicators, Turkey clearly disassociates itself from its own group. Predicting Turkey's public debt/GDP ratio as 27.9 percent last year, the IMF foresees that this figure will be 41.3 percent in Georgia, 46.4 percent in Azerbaijan, 49.1 percent in Costa Rica, 81.9 percent in Croatia, and 83.4 percent in Brazil.

IMF's figures reveal that Turkey will grow more than all the countries with the same rating and that it will be in a much better position in terms of the public debt.

Meanwhile, the figures also suggest that Turkey comes second in terms of the size of national income and the share of total investments in GDP.

When it comes to 20 countries rated by Moody's in the speculative-level group, Turkey comes third in terms of the growth rate and economic size in 2017.

With regards to total investments and public debt, Turkey ranks fourth among 20 countries according to 2017 forecasts.

The fact that no other country with a higher rating outscores Turkey in terms of growth rate stands out as another important element.