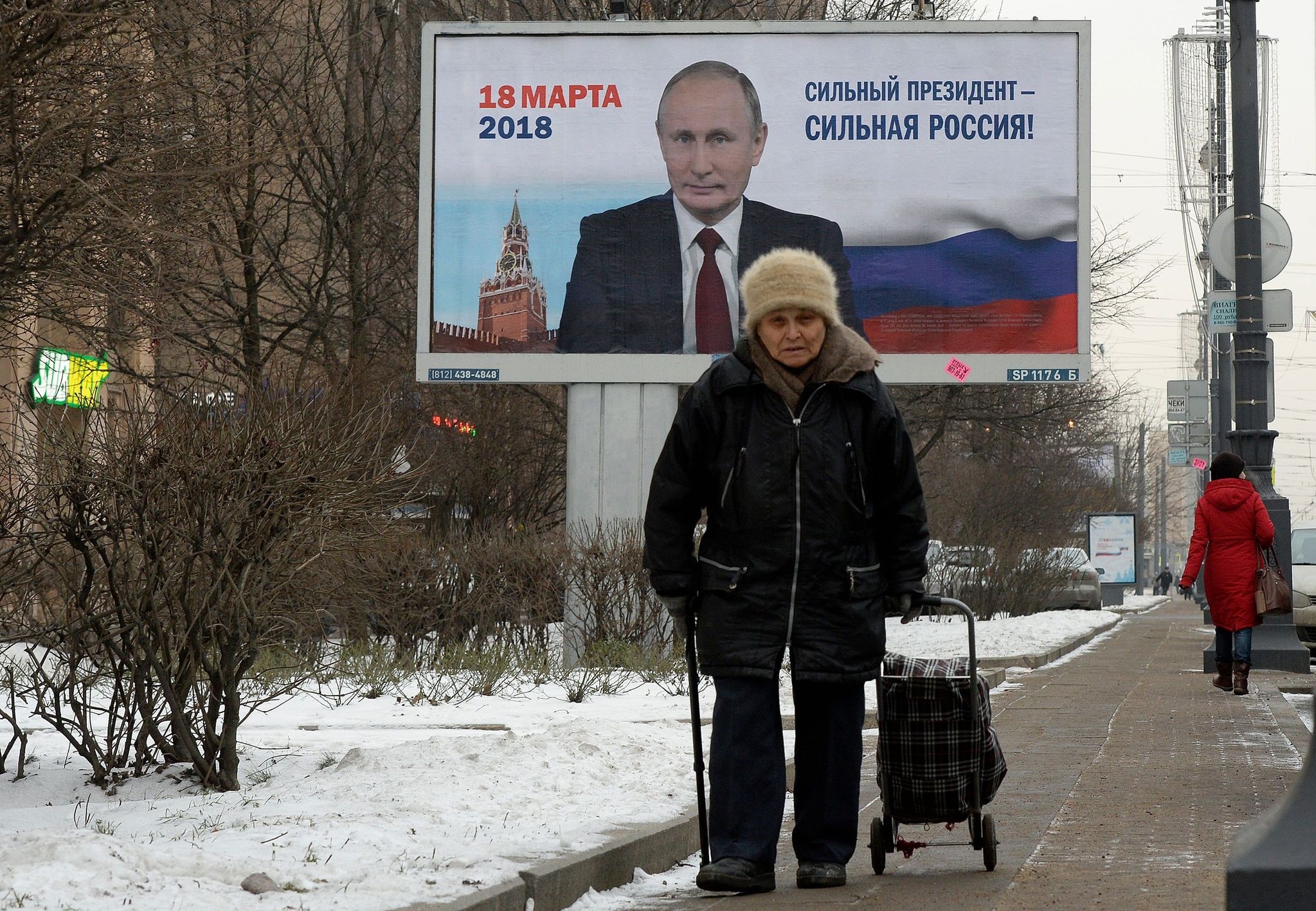 Even though his first two terms oversaw a period of economic growth, Russian President Putin's third stint in the Kremlin saw a decline in ordinary people's quality of life, which ahead of the presidential election in March, points at an uncertain economic future for the country

Outside a metro station in Saint Petersburg, Irina Semyonova, 70, is selling homemade tomato and eggplant preserves as a way to supplement her pension, which she says is not enough to live on.

"Can one live on 4,000 rubles, especially in an expensive city like Saint Petersburg?"

Her lifeline is a country house outside the former imperial capital where she grows vegetables in a garden.

"I go there in the summer, I have a vegetable plot and I sell what I grow, which helps me survive," she said.

Vladimir Putin, who is set to win a historic fourth term as president in the election on March 18, oversaw a period of economic growth during his first two terms from 2000 to 2008 that boosted personal incomes in the wake of the financial instability of the 1990s when many Russians lost their savings.

But his third stint in the Kremlin, which began in 2012 after four years serving as prime minister, saw a decline in ordinary people's quality of life.

Russia has seen purchasing power decrease continuously for the past four years after the economy was hit with international sanctions punishing Moscow for its annexation of Crimea in 2014, followed by a fall in global oil prices in 2016.

In November, the World Bank released a report in which it said less than half of the population, 46.3 percent, was secure from sinking into poverty, citing a figure 10 percent lower than in 2014.

The situation is particularly dire in provincial Russia, where ordinary people subsist on extremely low salaries and young families often have to be helped by retirees' meager pensions.

"The prices are crazy," said Vyacheslav, a retired mechanic living in Maloyaroslavets, a town in the Kaluga region southwest of Moscow.

"I cannot afford anything."

Tatyana Kuznetsova, 47, who lives in the nearby village of Ilyinskoye, says she already knows her pension will be less than $150 when she retires in several years, despite "breaking her back" at work since childhood.

Employed at a fish processing plant, she will never save enough to replace her sputtering old car, she said bitterly.

According to a study by Credit Suisse bank, the richest 10 percent of Russians control 77 percent of the wealth, placing the country on the same level of inequality as the United States in a ranking of developed countries.

"Between 2000 and 2013, the government didn't need to worry too much about the economy," said Chris Weafer of Macro Advisory consultancy.

"The combination of annually rising oil wealth, plus the strong growth in disposable income and available credit, almost drove the economy without much government intervention," he said. But the economic model reliant on energy extraction seems to have come to the end of the road, he said.

Although the Russian economy has come back into the black last year, medium-term forecasts for growth do not exceed one or 2 percent, far from the successes of the early 2000s.

"It is not enough to improve people's lifestyles or provide more funding for education, healthcare, etc.," Weafer said.

Although poverty does not seem to have greatly affected Putin's popularity in the country, the Russian president devoted part of his speech earlier this month to the problem.

He has vowed to halve "unacceptable" poverty figures in six years and boost growth to four percent. But while he has promised investment into infrastructure, health and housing, he was hazy on details about where the money would come from and did not mention any future reforms that would address the country's structural challenges like demographics.

"Throughout all of the last decade, we heard these warm words on reform and that has never really amounted to anything," said Neil Shearing, an economist with Capital Economics.

Natalia Orlova, an economist with Alfa Bank, said last year's growth could be attributed to large-scale investment in huge infrastructure projects like the Power of Siberia pipeline and the bridge connecting the Crimean peninsula to Russia, factors that have run their course.

"The best strategy is to focus on budget stability since sanctions are hampering all the rest," she told Agence France-Presse (AFP).

The government has made low inflation its goal over the past several years, with the central bank maintaining a strict fiscal and monetary policy that some say has hampered prospects of growth.

But Oleg Kouzmin, an economist at Renaissance Capital, says this hawkish approach has helped avoid the worst.

"While standards of living are still lower than they were, the economy has de-risked substantially," he said, pointing out low inflation, lower capital flight and a cleanup of the banking sector.

This "should contribute to further sustainable development," he said.