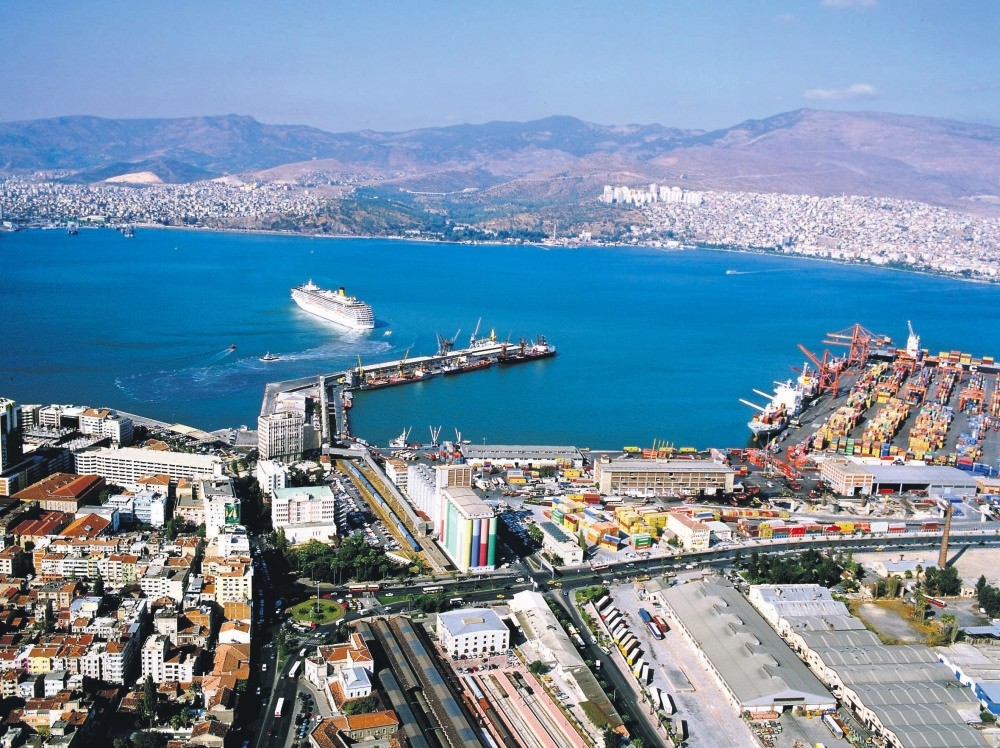 Turkey's western province of İzmir, which was one of the world's biggest port cities in the 18th century when it was only a small port town in the Aegean after being chosen as an investment hub by European shareholders, aims to become the leading city in the Mediterranean basin by improving its foreign trade.

İzmir, Turkey's third-largest city with a population of 4.3 million, creates 6.23 percent of the country's gross national product (GNP) with $14,257 in per capita income.

Having paid TL 63 billion ($15 billion) last year in tax, İzmir provided 11.76 percent of total taxes in the country with a collection rate of 85.3 percent.

İzmir ranks fourth in export figures, according to Turkey Exporters' Assembly (TİM) data, and is second after Istanbul with 77 companies among the top-1,000 exporters.

Despite these shining figures in the economy, the city has not had the same success in creating employment for an educated and well-qualified workforce.

İzmir is above the national average by 14 percent in total unemployment and 15.2 percent in non-agricultural unemployment. However, it has relatively better opportunities in terms of education, health and social indicators. Also, 102,776 people moved from İzmir to other countries and abroad in 2017.

Important investments in infrastructure, transport and logistics started with the 35 İzmir 35 Project program initiated by Prime Minister Binali Yıldırım to mobilize the potential of the city in 2011, when he was a deputy candidate from the city.It is expected that the main contribution of the program, in which Adnan Menderes Airport was modernized and expanded in capacity, the largest suburban rail network in the country was constructed with İZBAN, and many highway connections were established, to the economy will be the ongoing Istanbul- İzmir Highway and Ankara- İzmir High-Speed Train projects.

With the rapid expansion of the country's economy abroad and the increase in Anatolian cities' shares, İzmir has become a leading city again with investments and exports in the past 10 years after a reduction of its share at the end of the 1990s.

Regarded as the second-highest economy among 300 cities in the "Global Metro Monitor 2014" report, prepared by the U.S.-based Brookings Institution and JP Morgan Chase, İzmir has become a focal point of foreign investors due to the opportunities it offers and the potential waiting to be unleashed.

According to the Economy Ministry, the city increased its investment amount for an incentive certificate to TL 7.6 billion last year by increasing fourfold compared to the previous year. It also managed to cover TL 2.6 billion of these investments with foreign capital.

There are 2,553 companies with international capital currently active in İzmir, and in particular, the Aegean Free Zone reached $2.1 billion in exports for 2017 with the contribution to the facilities from 24 international companies.

According to the World's Most Competitive Cities report released by U.S.-based Conway Inc., İzmir was the most competitive in aerospace in 2015, third in chemicals and plastics and fifth in energy.

The city hosts Lisi Aerospace, which produces parts for commercial aircraft, PFW and Fokker Elmo in addition to the Kale-Pratt & Whitney plant, which produces motor parts for the F-35 fighter jet project; it is also in a privileged position with the Petkim and Tüpraş facilities in petrochemicals.

The State Oil Company of Azerbaijan Republic (SOCAR) initiated an investment of $19.5 billion for a new refinery, petrochemical, energy and logistics after a privatization process, which is the largest foreign investment in all of Turkey. In this context, SOCAR, which has activated Petkim Port with a capacity of 1 million 20-foot equivalent units (TEUs), plans to commission the ongoing STAR Refinery with an investment of 6 billion euros in the third quarter of the year.

İzmir will approach its target of becoming a regional industrial center with the launch of the refinery, which has is one of the biggest oil operations in Europe, Middle East and Africa.

Home to a 5 billion cubic meter, floating liquefied natural gas (LNG) storage and gasification unit, which serves as insurance for Turkey's energy, and the 6 billion cubic meters Aegean Gas LNG terminal, the city generates 18,394 gigawatt-hours of electricity, or 7.2 percent of the country's needs, at 109 power plants.

İzmir is a natural leader in renewable energy with wind year round and 300 days of sunshine. It maintains its position as the city generating the most power from wind with installed power of 241 megawatts at 49 power plants. Construction of 25 wind and solar plants is ongoing in İzmir.

The city has seen investments from companies such as TPI, LM Windpower and Enercon, which produce turbine blades and towers next wind power plants. It is also has a turbine plant planned to be built with a Renewable Energy Resource Area (YEKA) contract.

Preserving its share in the traditional economy based on agriculture and animal husbandry, İzmir earns close to $2.8 billion in foreign exchange income from agricultural exports led by cotton, seedless raisins, dried figs and tobacco.

The city is the most important center for the food industry after Istanbul and leads in organic agriculture.

Companies engaged in design and collection-based apparel and confectionery broke a record with exports of $1.3 billion last year.

İzmir, which has been inhabited for 8,500 years, contributes far below its potential in tourism despite the cultural tradition prone to tourism.

With 50,113 beds in tourist destinations such as the ancient city of Ephesus, Çeşme, Urla, Seferihisar and Foça, the city saw only 763,810 tourists last year.

İzmir, which made a breakthrough in cruise tourism after 2004, welcomed 533,000 cruise tourists in 2015. Last year, it dropped to 55,000 after the cancellation of cruises due to the conflicts in surrounding countries, terrorist attacks and the 2016 coup attempt.

İzmir created momentum in the municipal economy with the country's largest exhibition area at 330,000 square meters, completed in 2015.

The İzmir International Fair, Turkey's oldest, has been held 86 times in the city, and the MARBLE International Natural Stone and Technologies Fair has become the second-largest fair in the world in its field.

Following the launch of the new exhibition area, close to 30 fairs led by IF Wedding- Wedding Dresses, Suits and Evening Gowns Fair, Travel Turkey İzmir -Tourism Fair and Congress and Agroexpo International Agriculture and Livestock Fair, have grown rapidly in terms of square meters, participation and number of visitors.

İzmir Mayor Aziz Kocaoğlu said that İzmir, which is increasing its industrial power, will make a major breakthrough in tourism and services.

He said that İzmir's economy grew 5.1 percent from 2005 to 2014, and that today, İzmir has reached a very important point concerning growth. "İzmir has been more closely monitored by both Turkey and the world. Big companies started coming to the city one after another," Kocaoğlu said. "As a result of investments that increase the quality of life and strategies that provide tourism, promotion, marketing and rural development, we have created a development model in İzmir that will inspire every city."

İzmir Chamber of Commerce Chairman Ekrem Demirtaş said that boutique tourism, high value-added production based on advanced technology and intense foreign trade have been included in the vision that they determined for the city. Demirtaş added that the completion of the İzmir-Istanbul Highway and the investments made in ports will accelerate the city's development.