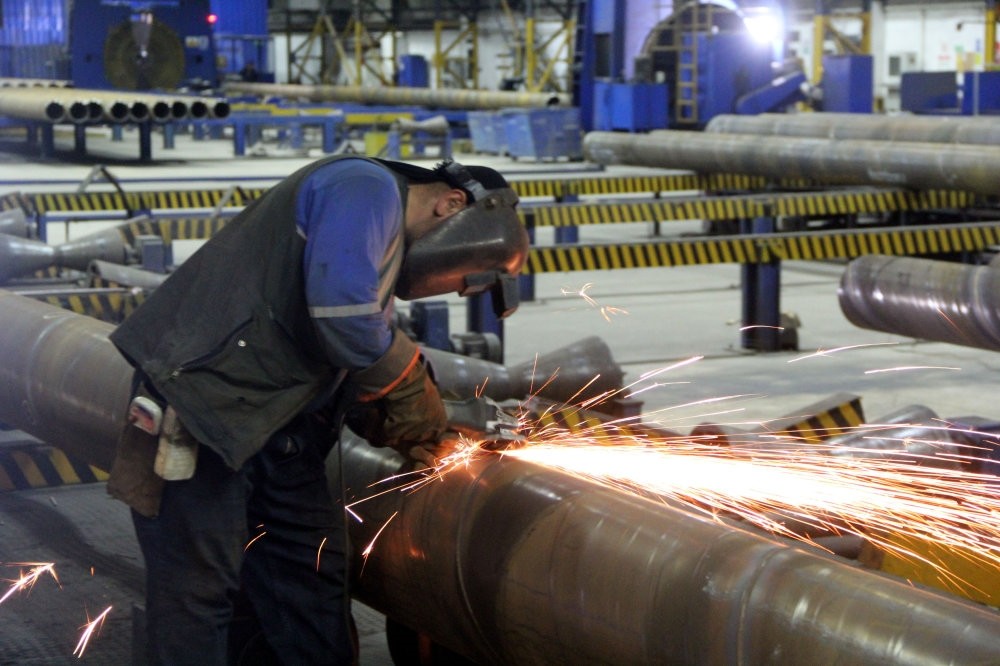 The decision for early elections is considered a positive move to ensure economic and industrial growth as it will start the transition to the new presidential governance system.
by daily sabah Apr 20, 2018 12:00 am

Members of Turkey's business world welcomed the announcement of snap elections for June 24 as they believe the decision eliminates uncertainty and by transitioning to the new presidential governance system, decision-making mechanisms and reforms will be expedited

Turkish citizens are scheduled to go to the polls on June 24 to elect their president and parliament, almost one-and-half years earlier than the previous date for November 2019. Following President Recep Tayyip Erdoğan's announcement on Wednesday for snap elections, the markets enjoyed the elimination of uncertainty with the Turkish lira spiking against the dollar and euro and the stock market rising over 1 percent within less than an hour. The president's call, however, was not only welcomed by markets but also by members of the Turkish business world as they hailed the decision as a move to discharge risks emanating from uncertainty and expedition of the reformative processes for the economy.

When opposition Nationalist Movement Party (MHP) Chairman Devlet Bahçeli called for early elections in a speech at a MHP parliamentary group meeting on Tuesday, Turkish markets were affected by jittery investors since it was perceived as creating political uncertainty.

The U.S. dollar-Turkish lira exchange rate rose from 4.07 to 4.12 at first while the stock market fell over 1.5 percent during the day following Bahçeli's remarks.

The MHP leader's call, in which he stressed the urgent necessity to implement the presidential system that passed in an April 2017 constitutional referendum, was welcomed by the ruling Justice and Development Party (AK Party) and its leader, President Erdoğan, as well as other opposition parties, but relief for the markets came Wednesday afternoon when Erdoğan announced the date for the elections to be June 24.Immediately after the president's announcement, the Turkish lira rose against the dollar and fell to 4.04 from 4.09. The euro also dropped to below TL 5 ($1.2). The Borsa Istanbul was also up by 1.42 percent and reached 110,928 points. The dollar was trading at TL 4.03 while the euro was hovering around TL 4.99 yesterday. Moreover, the Borsa Istanbul benchmark index BIST 100 stood at around 111,856 points.

While elaborating on the reasons for early elections, Erdoğan cited the necessity to expedite decision-making processes for the macroeconomic agenda and mega-scale investments as he said the new presidential system will ensure more reforms with effective decision-making mechanisms.

Istanbul Chamber of Commerce (ICC) Chairman Şekib Avdagiç said in a written statement that early elections offer good prospects for the real economy. The business world will move investment decisions ahead as the new presidential system will start as the mode of governance in the country. The transition to the new system, Avdagiç said, will ensure political stability which will support economic growth.

"It is urgent for Turkey to launch the presidential system in the face of mounting exchange rate risks and risks posed for the real economy sector," he said.

Chairman of Independent Industrialists and Businessmen Association (MÜSİAD) Abdurrahman Kaan stressed that stability in domestic and foreign politics constitute the most important driving force for the business world to continue working to boost employment and growth. "The stability businesspeople need will be ensured with the transition to the presidential government system which was passed with the April 16 referendum last year," Kaan said. Therefore, he added, MÜSİAD sees the decision to go to the polls on June 24 as a positive step for Turkey's stability.

Foreign Economic Relations Board (DEİK) Chairman Nail Olpak said in a written statement that the snap elections mean that uncertainties for the business world are eliminated. The elections will make it easier for the business world to effectively and quickly decide on investments and steer its way.Istanbul Chamber of Industry (ICI) Chairman Erdal Bahçıvan stressed that holding elections in the first half of the year is a positive decision for the Turkish economy and industry.

"The discussions of early elections have recently occupied Turkey's agenda. Therefore, the early elections in the first half of the year have weakened uncertainty and enabled Turkey to reinforce stability," Bahçıvan said. The second half of the year will enjoy stability and Turkey will focus on economic developments with the institution of the new presidential system, he added.

Young Businessmen's Confederation of Turkey (TÜGİK) Chairman Erkan Güral underscored that the excitement and morale that the transition to the new system will create will be positive on the economic indicators.In a report, the U.S.-based investment banking giant Goldman Sachs also highlighted the positive reactions of the markets to the snap elections. The reaction of the markets may have been triggered by the expectation for the improvement of political environment as well as by the investors' preference for political stability, the bank noted.Another investment bank, JP Morgan, stressed that snap polls reduced the risks of fiscal expansion while noting the possibility of an interest rate hike by the Central Bank of Republic of Turkey (CBRT) at its next meeting scheduled to take place on April 25.JP Morgan regarded the decision for the early elections as a market-friendly decision, it said. The snap elections will diminish the period of political uncertainty while it mitigates the risks resulting from fiscal expansion.