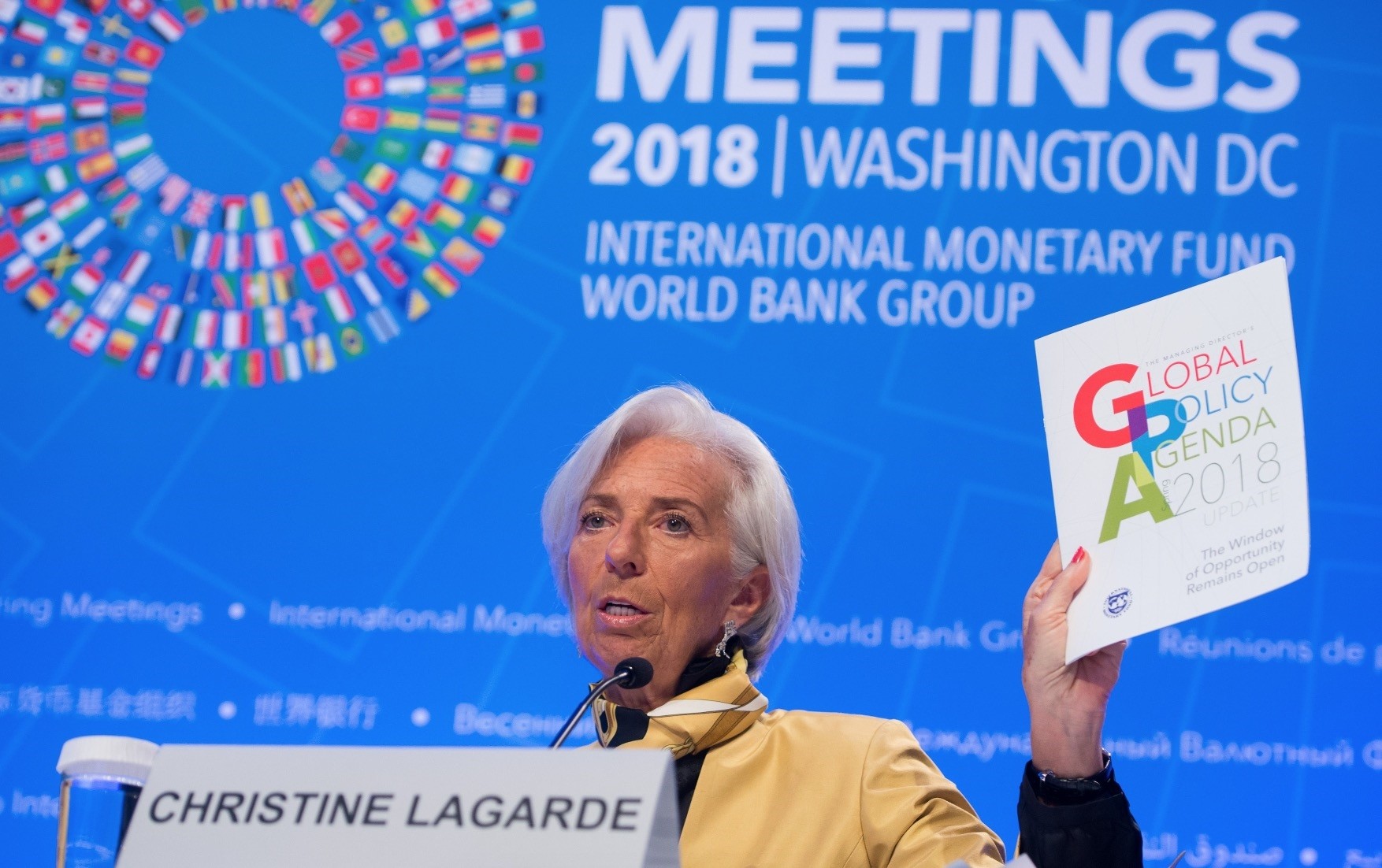 IMF Managing Director Christine Lagarde holds up a copy of the Global Policy Agenda as she holds a press conference during the 2018 Spring Meetings of the International Monetary Fund and World Bank Group at IMF Headquarters in Washington.
by Apr 23, 2018 12:00 am

The Washington-based crisis lender this week projected global growth at an annual pace of 3.9 per cent through 2019 but warned of looming threats including rising debts and protectionism. A surge in investment and trade has brought stronger, broader-based growth in the short term, said the International Monetary and Financial Committee, a ministerial-level panel of 24 countries that gives key advice to the IMF's Board of Governors, in its final communique.

"Rising financial vulnerabilities, increasing trade and geopolitical tensions, and historically high global debt threaten global growth prospects," the committee said. Ageing populations and tepid productivity growth make it even more important to seize the "window of opportunity" of current prosperity to "advance policies and reforms that sustain the current upswing, enhance resilience and raise medium-term growth for the benefit of all," the committee said. The IMF this week singled out the United States for widening its public debt - with the federal deficit topping 5 per cent of the economy annually for years to come - at a time when growth should allow reduced borrowing. But some poor countries have increasing debts, too, which Lesetja Kganyago, South African Reserve Bank governor and chairman of of the International Monetary and Financial Committee, underlined on Saturday. "While we have turned the corner after a decade of crisis, we agree that there are some dark clouds on the horizon, and we need collectively and individually to focus on deeper economic reforms to ensure higher, sustainable and inclusive growth," he told reporters.

IMF chief Christine Lagarde said there was "clear momentum towards dialogue" on trade issues during the spring meeting. While the IMF is not a trade venue, the fund will continue providing analytical work to explain "the role played by trade currently in supporting growth," she said. Kganyago said there was "no doubt ... that trade is important for the global economic recovery" and that the multilateral trading system should be preserved.