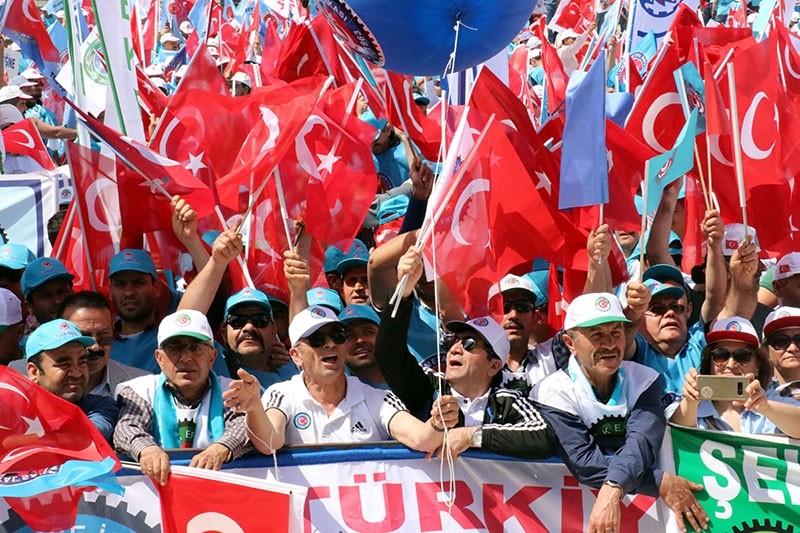 As Turkey marks the Labor and Solidarity Day – internationally known as the International Workers' Day or May Day – work safety, job guarantee and lack of organized labor remain key problems for the Turkish working class.

According to International Labour Organization (ILO) data, globally, a worker dies of an occupational accident every 15 seconds, while more than 2 million workers die each year due to occupational diseases.

In Turkey in 2017, 2,006 work safety related deaths were recorded by the left-wing Istanbul Council for Workers' Health and Work Safety (ISIG), with this number reaching 386 in the first three months of 2018. Construction remained the deadliest sector in 2017 with 453 workers killed in work accidents, corresponding to 23 percent of all deaths, followed by agriculture with 19 percent and transportation with 13 percent. Traffic accidents were the main cause of deadly work accidents with 22 percent, followed by cave-ins, collapses and landslides with 17 percent and falls with 16 percent.

Unemployment also remained high in 2017 at 10.9 percent, unchanged compared to 2016, with the number of unemployed people increasing by 124,000 to reach 3.454 million. Despite a 984,000-person increase in the number of employed, bringing the employment rate to 47.1 percent with a 0.8 percentage point increase, most of the new jobs added were training or apprenticeship positions with the number full-time new workers with social security benefits remaining at one-sixth of all jobs created. Youth unemployment for ages 15 to 24 was at 20.8 percent in 2017.

Since the 1890s, May 1 has been celebrated as the International Workers' Day in many countries. In Turkey, the first mass May 1 celebrations occurred in the 1910s in events held mainly by cotton, grape and port workers in Istanbul, Izmir and Thessaloniki. It was celebrated in Ankara in 1922 amid close ties with the Soviet Union during the War of Independence, and officially celebrated in 1923. From 1925 to 1976, Labor Day celebrations were officially banned and a new public holiday named Spring and Flower Day was introduced.

In 1977, the first mass Labor Day celebrations in decades took place in Istanbul's Taksim Square, attended by hundreds of thousands of people, but ended tragically when unidentified assailants opened fire on the crowd, leading to the deaths of 36 people amid gunfire and the subsequent stampede. From 1979 on, a ban was introduced for May Day celebrations in Taksim, which caused the square and its surrounding areas to become a clash zone between security forces and mainly left-wing groups each year.