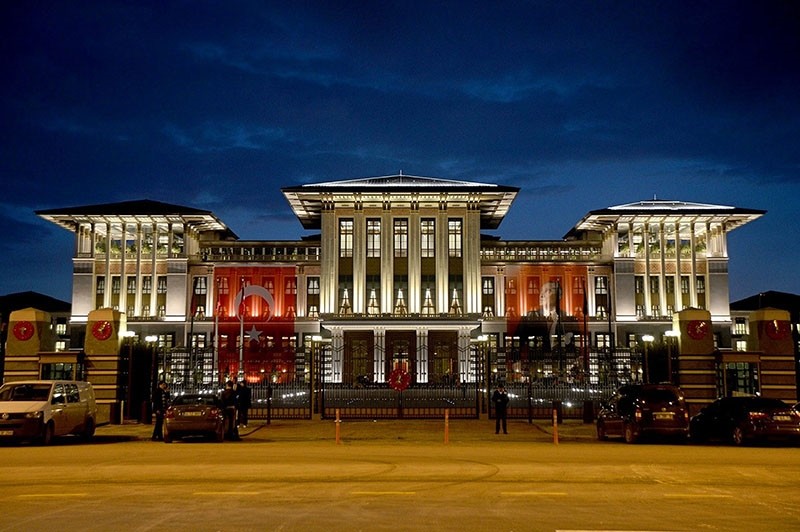 This file photo shows a general view of the Beu015ftepe Presidential Palace Complex in Ankara.
by Daily Sabah May 09, 2018 12:00 am

Erdoğan met with ministers and senior bureaucrats in the presidential office at 2:00 p.m.

"Necessary measures will be taken to reduce interest and exchange rate pressures as well as to combat inflation," the presidency said in a statement following the meeting, adding that the Central Bank of the Republic of Turkey (CBRT) will continue to efficiently use its tools for that purpose.

It also said that Turkey will continue to follow its growth-based policies.

The Economic Coordination Committee vowed to take steps that will increase Turkey's appeal for foreign investors.

Speaking at a press conference in Ankara, Presidential Spokesperson Ibrahim Kalın said that unemployment, foreign investments, exports, imports, current account deficit, interest rates and inflation would be among the issues to be discussed at the economy meeting chaired by Erdoğan later Wednesday.

"The depreciation of Turkish lira stems from global trends. Fiscal discipline will be maintained as usual; the election economy is not on the agenda," Kalın said.

On Wednesday, the U.S. dollar renewed record highs at 4.3746 against the Turkish lira after U.S. President Donald Trump announced its decision to pull out of the Iran nuclear deal. Borsa Istanbul's BIST 100 Index also fell below 100,000 points on Tuesday.

After the meeting was announced, the dollar retreated back to 4.28, while the BIST 100 Index gained by more than 1 percent to reach 100.500 points.

The CBRT also increased the daily amount of foreign exchange deposits against Turkish lira deposits auctions from $1.25 billion to $1.5 billion, adding that maximum outstanding deposit amount in auctions may reach up to $7.5 billion, from the current level of $6.25 billion.

It also updated the calendar of Turkish lira-settled forward foreign exchange sale auctions to be held in the second quarter.

"During this period, the maximum total amount of forward foreign exchange sale position may increase from its current level of $5.3 billion to $7.1 billion," it said.