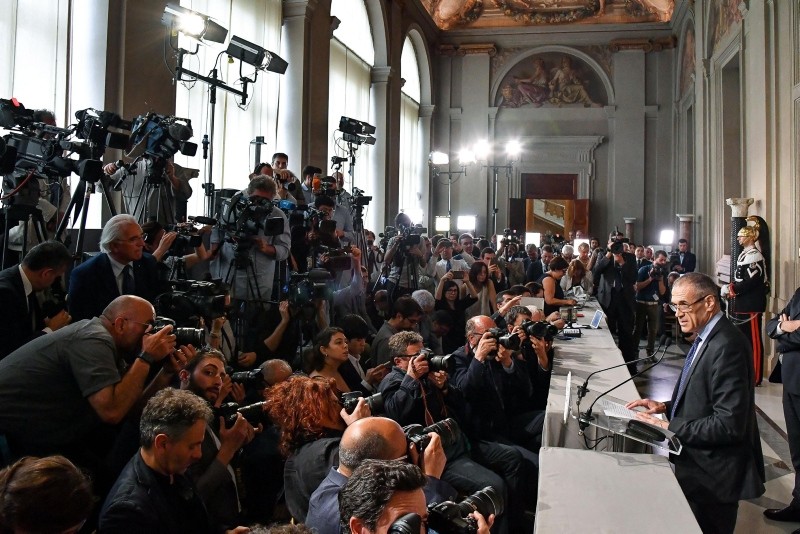 Designated Italian Prime Minister Carlo Cottarelli (R) addresses the media after a meeting with Italian President Sergio Mattarella at the Quirinal Palace in Rome, Italy, 28 May 2018. (EPA Photo)
by Jun 04, 2018 12:00 am

Investor morale in the eurozone deteriorated for the fifth month in a row in June to its lowest level since October 2016, hit by concerns about an anti-establishment government taking power in Italy and a trade dispute with the United States.

Sentix's index for the eurozone fell to 9.3 from 19.2 in May. The Reuters consensus forecast was for a fall to 18.4. The fall was due to investors' weaker assessment of current conditions and lower economic expectations, which fell to their lowest level since August 2012.

"The new government in Italy is causing great concern about the eurozone among investors," Manfred Huebner, managing director at Sentix, wrote in a note.

An Italian governing coalition of two parties generally seen as hostile to the euro took power on Friday, calming markets that had been spooked by the possibility of a new election that might have effectively become a referendum on whether to leave the single currency.

But investors remain nervous since the coalition promises to increase spending, slash taxes and challenge European Union fiscal rules, which would add to Italy's debt pile.

A Sentix index for Germany fell for the fifth month in a row, as the economy faces headwinds from U.S. tariffs on steel and aluminium imports from the European Union that took effect June 1.

After failing to win trade concessions, the Trump administration withdrew on Thursday exemptions from the global tariffs which had been given to steel and aluminium imports from the EU, Canada and Mexico.

The EU has taken the first step in taking the United States to the World Trade Organization to challenge the legality of the new tariffs and the Trump administration's national security justification. Brussels has submitted an eight-page list to the international trade body, covering goods it would hit with retaliatory measures.

Sentix conducted the survey of 920 investors between May 31 to June 2, one day after the U.S. tariffs went into effect.