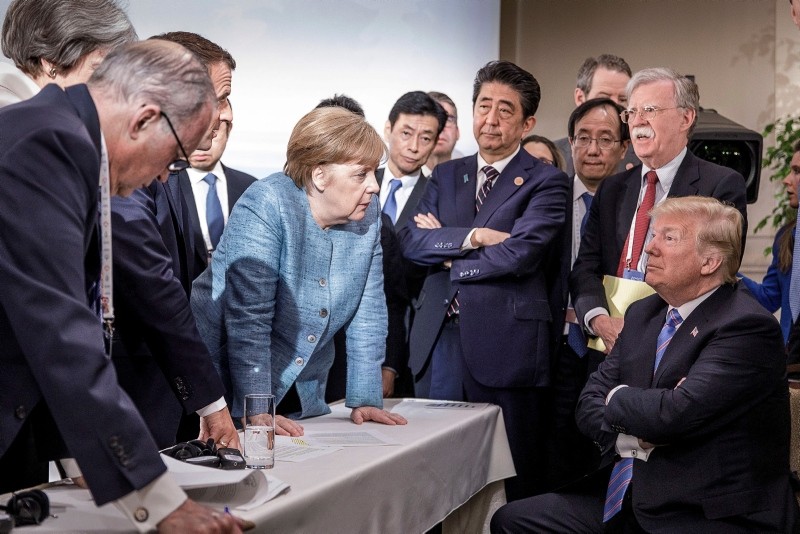 The leaders of the G7 on Saturday failed to heal a tariff dispute that has pushed them to the brink of trade war, as Donald Trump quit their summit early warning Canada, Japan and Europe that "the gig is up."

Trump had come to Quebec insisting on his long-standing claim that America has been exploited for too long by existing trade arrangements -- and he was met by counterparts equally determined to protect the "rules-based" international system.

The US president left on Saturday for Singapore and a historic summit with North Korea's Kim Jong Un, claiming he had made progress convincing the other G7 leaders that trade between their countries must be better balanced or halt altogether.

"I guess they're going to go back to the drawing board and check it out, right?" he said, warning that if his fellow six leaders make good on their threats to take retaliatory measures, they could find themselves shut out of American markets.

European officials said Trump had opposed language in the draft final summit communique on the need to bolster the World Trade Organization and multilateral oversight of commerce, but that this commitment would survive.

"For us, it was important to have a commitment to rules-based trade," Germany's Chancellor Angela Merkel said.

As the leaders met, Trump played a wild card, suggesting that rather than both sides boosting retaliatory tariffs -- as he has just done on steel and aluminum -- they could declare for entirely free trade in the G7 zone.

"No tariffs, no barriers. That's the way it should be. And no subsidies. I even said, 'no tariffs'!" Trump insisted. "That would be the ultimate thing, whether or not that works, but I did suggest it."

Trump's utopian idea was greeted with skepticism -- "Good luck. That would be a leap into a very different world," declared one senior European official -- with leaders pointing to the many regulations and non-tariff barriers that limit free trade.

French President Emmanuel Macron, for example, noted that under European Union rules France currently has open borders with Britain and Germany and runs trade deficits with both -- far from Trump's vision of "reciprocal" balanced trade.

European officials suggested that the upbeat, punchy news conference that Trump delivered before skipping out on the summit was aimed at his trade-skeptic supporters back home, and did not reflect the results of the summit.

"We're talking to all countries," he said, denouncing what he said were huge existing tariffs on US exports around the world. "It's going to stop. Or we'll stop trading with them. And that's a very profitable answer, if we have to do it.

"If they retaliate, they're making a mistake," he warned, insisting that the United States has much less to lose than its partners in the event of world trade breaking down. "We will win that war 1,000 times."

The text of the annual G7 joint communique is usually all but finalized before the leaders meet for two days of glad-handing and group photo opportunities, but this year officials were still negotiating even as Trump headed for his plane.

Whatever the text eventually says, Canada's summit will be remembered mainly for fierce disagreements over Trump's tariffs and his surprise request to return Russia to the G7 fold, four years after its expulsion over the annexation of Crimea.

While diplomats wrangled in private, summit host Prime Minister Justin Trudeau gathered the other leaders for a breakfast session on women's equality. Trump arrived 17 minutes after the planned 8:00am start time and after Trudeau's opening remarks.

With his wife Melania back home in Washington, Trump cut a lonely figure on arrival at the golf resort in rural Quebec as he posed with his host Trudeau and his wife Sophie and other first couples.

A member of Macron's team characterized the talks as "frank and robust," with Trump first repeating his lengthy diatribe about what he regards as unfair trade restrictions -- before the Europeans responded with facts and figures they felt would blunt his argument.

- Quest for a joint statement -

Trudeau told Trump that it was "unacceptable" to cite national security when targeting a military ally like Canada.

The summit was wrapping up just as Chinese President Xi Jinping begins hosting the leaders of Russia and Iran at a two-day regional security meeting in a symbol of the power-play between East and West.