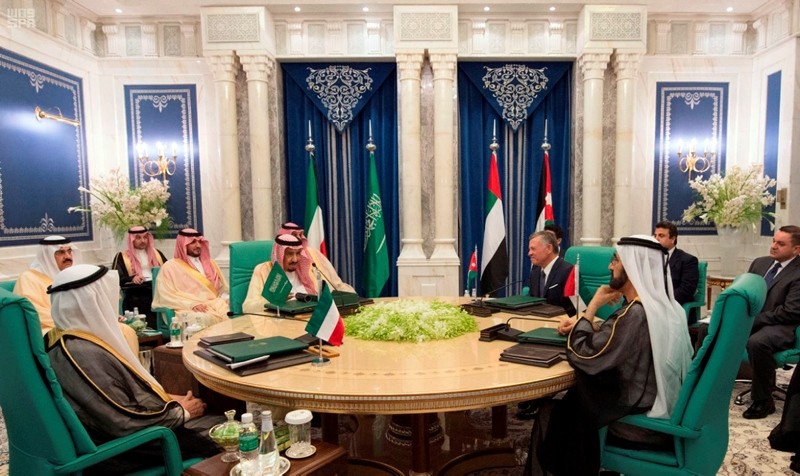 Three Gulf Arab states pledged $2.5 billion in aid to Jordan on Monday in an effort to stabilize the U.S.-allied kingdom as it faces its worst protests in years over government austerity plans that include tax increases.

The money from Kuwait, Saudi Arabia and the United Arab Emirates will go toward a deposit in Jordan's Central Bank, cover World Bank guarantees for the kingdom, offer budget support and finance other development projects.

The hope is the five-year aid package, which mirrors a similar aid package offered by Gulf states in 2011, will help Jordan come up with a new, more-palatable austerity plan to satisfy international lenders and its public.

The statement quoted King Abdullah II as saying he hoped the aid would help his country overcome its fiscal crisis.

In December 2011, the six-nation Gulf Cooperation Council that is headquartered in Saudi Arabia pledged to give $2.5 billion in aid each to Jordan and Morocco, both of which had been invited to join the regional group that year.

The pledge from the GCC was to last five years. It expired last year and so far the six-member GCC has yet to offer any additional funding as the bloc remains split by a diplomatic crisis with Qatar. Jordan receives over $1 billion a year from the U.S., as well as aid from Europe and elsewhere.

Cash-strapped Jordan is struggling to curb its debt after securing a $723-million loan from the International Monetary Fund in 2016.

Austerity measures tied to the IMF loan have seen prices of basic necessities rise across the kingdom, culminating in a week of angry protests over tax proposals that forced Prime Minister Hani Mulki, who was replaced last week with Omer al-Razzaz.

Daily protests across the kingdom began on May 30 alongside a partial strike organized by unions, and continued for eight days, prompting King Abdullah to replace the prime minister and cancel an increase in fuel and electricity prices.

It was the fifth raise announced by Amman to subsidized electricity prices for this year.

According to official data, Jordan's budget for this year suffers from a roughly financial deficit of $1.753 billion.

The authorities on Thursday announced they were withdrawing the unpopular legislation, but still face a mammoth task to balance popular demands with the need to reduce the public debt burden.

While peaceful, the protests threaten the stability of a kingdom strained by hosting those who fled the wars in Iraq and Syria. Jordan also is one of only two Arab nations to have full diplomatic relations with Israel and plays an instrumental role in the region and in Israeli-Palestinian peace efforts.

The Gulf aid package appears driven by the desire to avoid a repeat of the 2011 Arab Spring uprisings, which saw pent-up public anger spilling onto the street across the Middle East, analysts say.

"The speed and the gravity with which the Gulf states are responding is a very clear testament to their concern and determination to nip this unrest in Jordan in the bud," Lori Boghardt, a senior fellow at the Washington Institute for Near East Policy, told AFP.

"They are going to do all they can to thwart another Arab spring on their doorstep."

Gulf states, except for Bahrain, largely avoided the pro-democracy protests unleashed by the Arab Spring, but they have sought to deepen economic links in the region following an oil price slump in 2014.

Jordan blames its economic woes on instability rocking the region and the burden of hosting hundreds of thousands of refugees from war-torn Syria, complaining it has not received enough international support.

The World Bank says Jordan has "weak growth prospects" this year, while 18.5 percent of the working age population is unemployed.