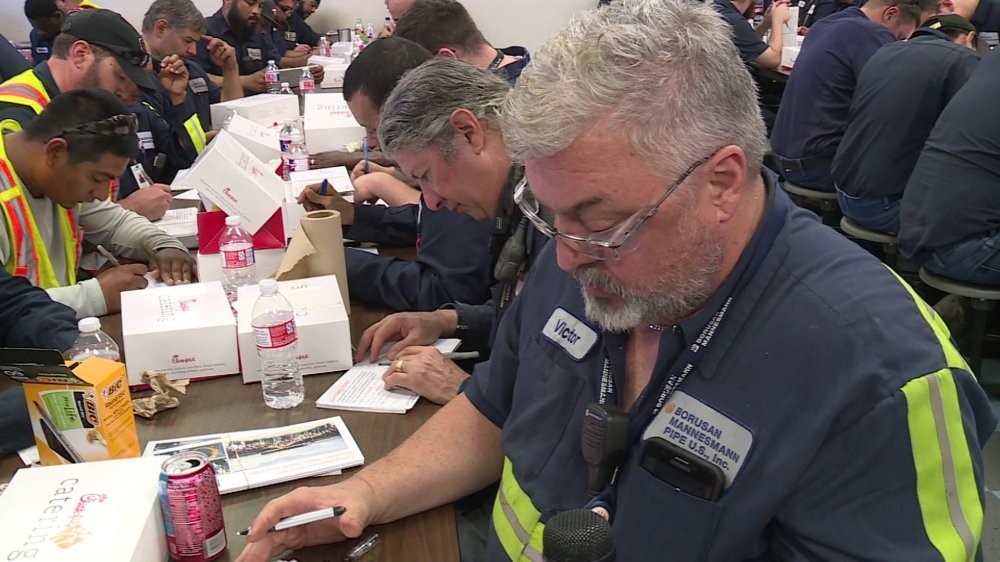 Borusan workers in the Baytown factory wrote a letter to U.S. President Donald Trump to stop steel and aluminum import tariffs.
by Daily Sabah with Wires Jun 12, 2018 12:00 am

The U.S. decision to impose 25 percent tariff on imported iron and steel, and a 10 percent tariff on aluminum on some countries, have mobilized mill workers - who use raw materials to build other products - to write a letter to the U.S. President Donald Trump to halt import tariff as they are concerned about the future of their jobs, according to an elaborate report by the U.S. broadcaster CBS.

At the Borusan Mannesmann mill in Baytown, Texas, which manufactures steel pipe and tube products, workers penned letters to Trump last week, imploring the administration not to carry out the tariffs on steel and aluminum.

The workers are concerned because the tariffs are likely to harm the company and potentially result in job losses, the CBS reported. The threat has already waylaid Borusan Mannesmann's growth plans.

Just over 200 people work at the mill, which imports raw material from a facility in Turkey. But it could have more employees because the company has been planning a $75 million expansion that would have added 170 jobs. That investment has been put on hold in the wake of the steel tariffs, given that the cost of getting materials from abroad will increase and selling the more expensive finished products will likely get tougher. Without a waiver, Borusan may face tariffs of $25 million to $30 million annually.

Each employee's letter asked Washington to "please consider our situation" for more time to build and create the chance for the jobs Baytown needs.

Steel and aluminum production jobs represent a small segment of the U.S. economy. About 255,000 people are employed in steel and 61,000 people work in aluminum, according to Moody's Investors Service. BMP, the parent company that owns the mill in Baytown, has filed an exclusion request with the U.S. government asking for a two-year exemption on raw material imports produced at its facility in Turkey - which would otherwise be subject to a 25 percent tariff.

The company argues in its request that the exclusion is necessary for its expansion and would "unlock" the investment the firm needs. Currently, about 90 percent of aluminum used in U.S. manufacturing is imported, as well as one-third of all steel. After the tariffs were announced, industry groups said consumers would face the brunt of the tariffs due to increased prices for items ranging from beer to cars to thousands of other items built or packaged with the metals.