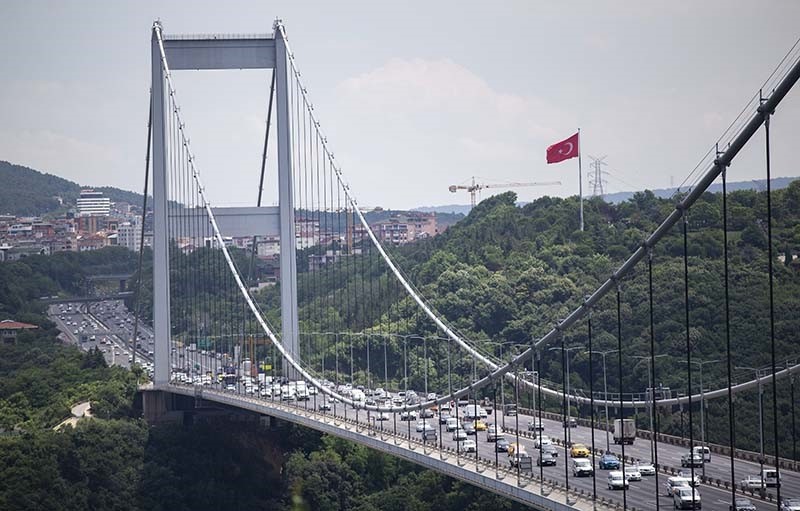 Fatih Sultan Mehmet (FSM) Bridge has generated 8.4 billion Turkish lira ($1.8 billion, based on current rate) revenue in tolls with a total of 847 million vehicles using the bridge since its completion in 1988.

The second bridge built on the famous Istanbul Bosporus Strait, FSM Bridge has been vital in connecting the two sides of Istanbul for three decades.

Bridging the two parts of Istanbul – the European side on the west and the Asian side on the east with the Bosporus flowing between – has been a goal for millennia for those who have inhabited the region. With Istanbul being a popular migration point throughout its history, every civilization that ruled Istanbul wanted to somehow bridge the gap between the two sides.

It was the Turkish government that finally managed to realize the dream. With its local population booming thanks to steady in-migration and increasing traffic congestion, the Turkish government decided to greenlight the project to build the Bosporus' first bridge, the July 15 Martyrs Bridge (formerly known as Bosporus Bridge).

When July 15 Martyrs Bridge was completed and went into service on Oct. 30, 1973, it only served around 24,000 vehicles daily. However, as the city's population expanded, the bridge became overloaded, and the need for a second bridge arose.

Despite estimates that construction would take around 1,100 business days to finish, it was completed 30 years ago today on July 3, 1988, some 192 days earlier then estimated.

The bridge, now standing about 5 kilometers (3 miles) north of July 15 Martyrs Bridge, connects Hisarüstü district on the European side with Kavacık district on the Asian side.

The two towers of the bridge were placed on the sides of the hills on both banks, level with the bridge deck. The distance between the towers, called the main span is 1,090 meters long.

Two massive 50-by-60-meter-wide and 35-meter-deep anchorage blocks are located at each end of the bridge, transferring the tensile load from cables to the ground.

Each anchorage blocks feature a room where cables separate into 36 twists and each twist spreads into a larger surface.