Turkey to coordinate with European allies on Iran sanctions 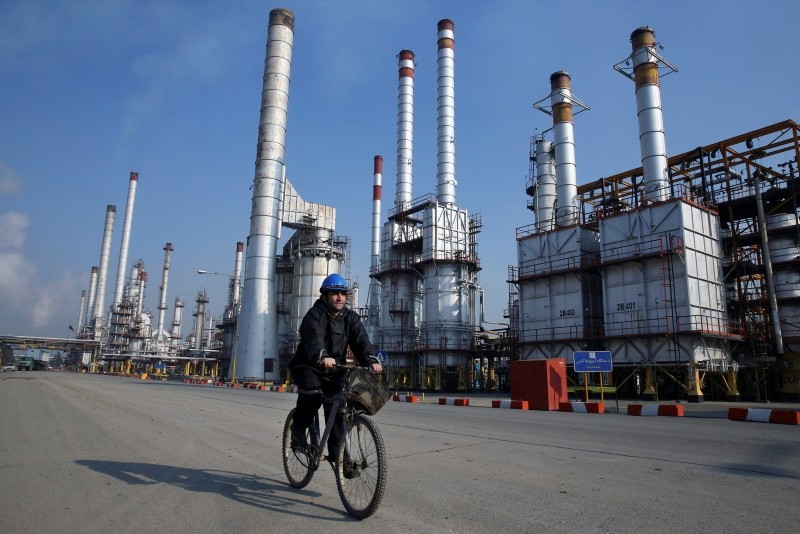 While U.S. Treasury officials visit Ankara to discuss sanctions on Iran, Turkey and its largest trading partner, the European Union, are looking for ways to keep the nuclear deal in effect as well as trade with Iran open, after sanctions were imposed by the U.S. following Trump’s abandonment of the deal

Turkey and the European Union are planning to ensure cooperation on matters related to U.S.-imposed Iran sanctions, which will take effect in August, after the termination of a 90-day period following U.S. President Donald Trump's abandonment of the Iran nuclear deal on May 8, Turkish government sources said Friday.

As negotiations with Iran's trade partners on both sides of the Atlantic continue in a bid to salvage the nuclear deal, the European Union (EU), Turkey and Iran's major oil markets have agreed on devising methods to maintain trade with the country.

EU imports from Iran increased by 83.9 percent last year. The EU represented over 16 percent of Iran's trade, with petroleum products composing some 88 percent of Iran exports to the EU and totaling to 9 billion euros.

Turkey and Iran have also discussed trading in local currencies as an alternative medium of exchange to dollar and issued the first letter of credit in the form of a national currency swap to exchange Iranian rial and Turkish lira in April.

Seeking alternative ways to dollar in trade with Iran, European countries have already issued euro-denominated loans in order to finance exports to Iran. For instance, France started offering euro-denominated loans to Iranian buyers of its goods later this year, to help trade flourish outside the reach of U.S. sanctions, state-owned investment bank Bpifrance announced at the beginning of this year.

Italy and Iran agreed on a framework credit agreement to fund investments in Iran worth up to 5 billion euros. Iran's government-owned Bank of Industry and Mine and Middle East Bank signed the accord and the investment arm of Italian state-owned holding Invitalia. Moreover, Austria's Oberbank and Denmark's Danske Bank inked framework agreements with a number of Iranian banks in September 2017, under which they will provide financing for Austrian and Danish companies exporting to Iran.

Turkey and EU, as two strong trade partners, have also been previously reported to coordinate the issue of steel tariffs imposed by the U.S. President Trump in March.

US Treasury seeks to 'educate' Turkish firms on sanctions

Donald Trump's tenure as the United States president has led to some of the most controversial decisions in recent history. His order to throw the Iran Nuclear Agreement into the trash bin is, indeed, one of the most important of them.

Moreover, Trump's order for the U.S. Department of Treasury to impose sanctions on Iran is certainly an issue that directly concerns Turkey. Accordingly, Marshall Billingslea, the Assistant Secretary for Terrorist Financing, was in Turkey on Friday to partake in negotiations with Turkish authorities and hold meetings with Turkish companies who have been operating in Iran for years.

As Billingslea put it, he was in Turkey "to educate Turkish companies" on behalf of the American administration. "We definitely are encouraging the companies to wind down their businesses. That's why we gave the 180 days. It is up to the individual companies to make their business decisions. We are not in a situation that we are trying to dictate Turkish companies on what to do," he told Daily Sabah in an interview.

"We want to educate Turkish companies," he said.

Although Billingslea kept a relatively mild tone towards companies who decide to continue doing business in Iran after August and November this year, he said it would nonetheless pose a risk for them, "Any company that is engaged in these prohibited transactions; if they keep doing so after August or November they are running business risk. … On evading sanctions, we would certainly encourage that efforts not be made to do that. We certainly would be very, very concerned."

On May 8, President Trump pulled the U.S. out of a 2015 nuclear pact with Iran reached by his predecessor Barack Obama and other world powers, the U.K., France, China, Russia and Germany, and ordered tough U.S. sanctions on Tehran.

Turkey remains skeptical of the idea, as in the first four months of this year, Turkey bought more than 3 million tons of crude oil from Iran, almost 55 percent of its total crude supplies; Tehran remains Ankara's biggest crude oil exporter in the first quarter of 2018 despite a 20 percent decrease.

He said that the sanctions on the oil trade and central bank of Iran will go into effect in November, thus giving some time for further discussions, "We have a little bit of time. We need to intensify our discussions."

That being said, Washington is very adamant on making sure that Turkish companies abide by American rules. "We want to see the evidence of winding down the business," he said, adding: "I believe that this time around the treasury sanctions will be enforced very, very aggressively and very comprehensively. The Turkish government understands our position. The reason for that is because Iranian behavior has become so concerning that they risk triggering a crisis."

In an attempt to bolster his argument as to how Iran had become so dangerous in the region, Billingslea said: "What happens if one of those [Iranian] missiles land in Riyadh?"

Shedding light on the details of his negotiations with Turkish authorities, the assistant secretary asserted that the views of Ankara and Washington do not clash. "It was a very positive discussion there was no conflict or clashing in any way. There was no hostility on either side. We made our presentation to explain in very clear terms why we are taking the steps we are taking and what is motivating us."

Following the talks on Friday, the Turkish Foreign Ministry released a written statement, saying: "Iran is an important neighbor for Turkey, in view of both our bilateral economic and commercial relations as well as our energy imports. Therefore, we will continue to monitor U.S. sanctions within this framework."

Billingslea, however, refused to consider Iran as nothing more than a mere neighbor of Turkey. "Iran may be a neighbor of Turkey but they are not a friend or ally. Let's not make that mistake. The U.S. considers itself both an ally and friend of Turkey."

One of the questions that has drawn the most attention in Turkey recently on the Iran sanctions was whether Ankara and Washington could find a way for the former to get an exemption or waiver. Billingslea ruled it out completely. "You cannot assume that we are offering exemptions or waivers. That's not what we are here to do."

On the possibility of sitting at the table for a new nuclear agreement, in which Turkey could possibly play a role, Billingslea said: "What the United States wants for Iran [is] to return to the table and address different dangerous activities that they are involved in. The Secretary of State has laid out in a speech recently the actions that Iran needs to undertake to address these concerns." He emphasized that it would not be possible for dozens of countries to be at the table.

"One of the main failings of the way the previous negotiations happened is that U.S. allies and friends were not sufficiently involved and given the details where the discussions occurred. We intend to make sure that our NATO allies are kept fully informed of the progress we are making."

US Treasury provided intelligence on PKK

Being the U.S. Assistant Secretary for Terrorist Financing, Billingslea was not only in Turkey to hold talks regarding the Iran sanctions. The PKK and its Syrian affiliate, the Democratic Union Party (PYD) and its armed wing the People's Protection Units (YPG) have troubled Turkish-U.S. relations to a great extent.