US reinstates sanctions on Iran as Europe vows to keep Iran in deal, protect own firms 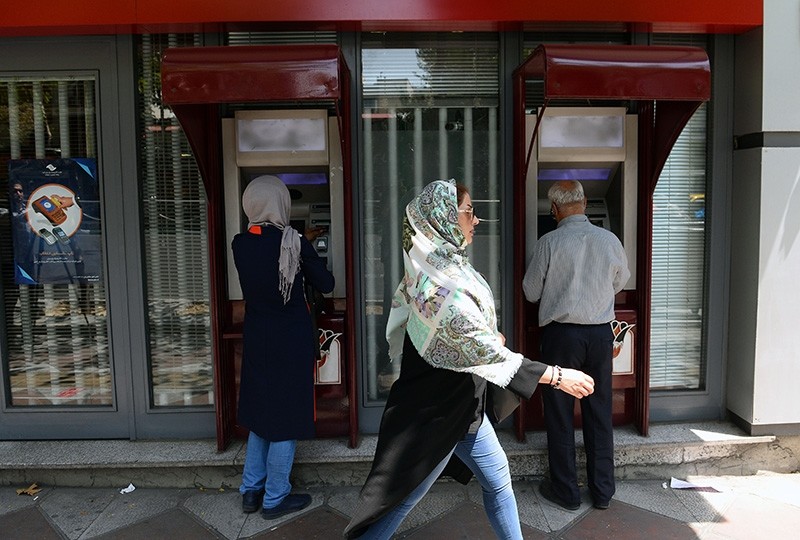 The first round of U.S. economic sanctions on Iran has been reimposed at the end of the 90-day period, harshly criticized by European Union pledging to protect its companies that will receive no compensation for their losses

Trump said that the U.S. policy is to levy "maximum economic pressure" on the country.

The move follows Trump's decision to abandon the Iran nuclear deal on May 8, which came into force in 2015 with the joint efforts by the U.S., the U.K., France, China, Russia, Germany and the European Union.

In a statement Monday, Trump restated his opinion that the 2015 international accord to freeze Iran's nuclear program in return for lifting sanctions was a "horrible, one-sided deal." He said it left the Iranian government flush with cash to use to fuel conflict in the Middle East.

"I remain open to reaching a more comprehensive deal that addresses the full range of the regime's malign activities, including its ballistic missile program and its support for terrorism," Trump said in the statement.

The return of sanctions was a source of regret for the U.S. allies across the Atlantic as the EU voiced its regret over the U.S. decision and vowed to protect European companies.

The first round of sanctions that will go into effect at midnight prohibit the Iranian government from buying U.S. dollar, conducting trade transactions in gold or other valuable metals and investing in Iranian debt. These sanctions also target Iran's steel and aluminum sectors as they forbid the country's trade of aluminum, steel, graphite, coal and certain software.

The Iranian automotive industry, the second-largest industry in the country after petroleum, will also be hit hard by the sanctions, while the country is also banned from importing aircraft and aircraft components. The U.S. sanctions also halt Iran's ability to export its carpets and foods to the U.S.

The sanctions will be valid for other companies that will continue their trade with Iran without abiding by the U.S.' unilateral decision. However, there will be no compensation for the losses of third parties, according to a statement made by the U.S. Treasury's Office of Foreign Assets Control (OFAC).

European nations spearheaded by the U.K., Germany and France aggressively criticized Trump's move to revoke the Joint Comprehensive Plan of Action (JCPOA) and stated they wanted to keep Iran in the deal while aiming to limit the country's nuclear activities.

Yesterday, the EU said, "We deeply regret the reimposition of sanctions by the U.S. due to the latter's withdrawal from the JCPOA," adding that it would now swiftly bring in legal cover for firms in the 28-nation bloc to work with Iran after the Trump administration rejected European calls for an exemption.

The bloc added that is "determined to protect European economic operators engaged in legitimate business with Iran," and has updated its Blocking Statute to take effect Aug. 7 in order to block businesses from impact of U.S. extraterritorial sanctions.

The statute forbids EU companies from complying with the sanctions, nullifying foreign court rulings against them and allowing them to recover damages from penalties. The EU's statement added, however, that the international nature of the banking system could make the blocking statue difficult to enforce in certain instances.

Despite the demand of European countries to institute compensation for their companies and vow to protect them, a number of European giants have left the Iranian market. The French energy giant Total has moved away from a contract to develop an offshore gas field in South Pars in what would have been the first project of its kind since the 2015 nuclear deal.

Because Total's investment in the field had barely just begun, the company is avoiding incurring significant losses on a $5 billion project, which Iran says the Chinese group China National Petroleum Company will now take up. Total was the first Western company to enter the Iranian market after the JCPOA took effect in 2015. The company said it may continue the project in case French and European companies provide support to acquire a waiver from U.S. sanctions.

French automakers Renault and PSA have taken different approaches publicly. PSA, behind the Peugeot, Citroen and Opel brands, said in June it was preparing to suspend activities in the Islamic Republic, its chief foreign market by volume, noting those units account for "less than 1 percent of sales."

The group, which is Europe's second-biggest carmaker, sold more than 445,000 vehicles in Iran last year, making the country one of its biggest markets outside France.

Renault says it intends to keep up activities in Iran, albeit scaling them back. On July 16, the automaker announced a 10.3 percent drop in sales in Iran to 61,354 units.

The announcement came two days after talks in Vienna between Iranian Foreign Minister Mohammed Javad Zarif and his counterparts from Britain, China, France, Germany and Russia produced no breakthroughs.

The German conglomerate Siemens returned to Iran in 2016 seeking to sell gas turbines and generators for electricity stations and has won a contract to sell compressors for a natural gas processor. However, the company said it will comply with the changing framework on Iran.

He added Siemens "will take appropriate actions to align its business with the changing multilateral framework regarding Iran."

The U.S. sanctions package against Iran will come into force on Nov. 5 – one day after the expiration of the 180-day period. As of this date, while the National Iranian Oil Company (NIOC), the Iranian Oil Trading Company and the National Iranian Tanker Company (NITC) will be subject to international restrictions, the sale of oil and oil products from Iran, whose economy largely depends on oil, will be sanctioned.

According to the National Iranian Oil Company, the country has about 150 billion barrels of crude oil reserves and 33.5 trillion cubic meters of natural gas reserves.

Iran is now exporting half of its crude oil exports of an average 2.2 million barrels a day to China and India, 25 percent of it to European countries and some of it to South Korea and Japan. It is estimated that Iran's oil exports will decrease by 500,000 barrels per day in the first stage due to the sanctions. The South Korean and Japanese governments' quest for exemption from the U.S. for Iranian oil exports has proved inconclusive. It is predicted that these countries will halt oil imports from Iran until November when the second-stage sanctions will come into force.

It is predicted that Iranian oil exports will drop by 1 million barrels with the introduction of the second stage sanctions – which means that Iran's annual oil revenues, which is about $60 billion currently, will decrease by $27 billion.

Iranian government spokesman Mohammad Bagher Nobakhtannounced that $95 billion flows into Iran a year and most of this comes from oil exports which resumed following the nuclear deal in 2015.

Iranian President Hassan Rouhani had promised more liberty and a stronger economy in his election campaign in June 2013.

However, Rouhani could not make good on most of his election promises, considering the bleak economic situation and the serious pressure to be inflicted on the country, which is already going through hard times, by the enforcement of upcoming economic sanctions. Such a situation might lead to the reinforcement of the conservative wing again.

While economic troubles have turned into social, political and security problems and politicians put blame on each other for the situation, the conservative wing, which holds the key echelons of the country's administration, is using the recent crises to undermine the Rouhani government that is supported by reformists.

According to Iranian political expert Halil Muhammedi, opponents blame Rouhani for the dire state of affairs.

Muhammedi stated that, in the process starting with the U.S. withdrawal from the deal, international banks and financial institutions have turned away from Iran. This situation – coupled with the depreciation of the Iranian toman, a superunit of the rial – has foiled all efforts made by Rouhani, who had pinned his hopes on the nuclear deal.

"People think that Rouhani does not do his share apart from the obstacles stemming from the system. They think that nothing has changed in the country and that demands for freedom have not been fulfilled," Muhammedi added.

The economic crisis in Iran and people's reaction

Iranians were bracing for the return of U.S. sanctions against the backdrop of angry protests and a corruption crackdown that are roiling the embattled government of Rouhani.

The toman hit an all-time low against the dollar in the past week. One dollar, which equaled 6,000 tomans in the free market in April, soared by 80 percent in three months, exceeding 11,000 tomans last week.

While the sudden upsurge in the exchange rate is reducing the purchasing power of people, workplaces are going out of business one after another and unemployment is continuously increasing.

While Iranian people are calling for a "general strike and protest" on social media, the country has seen days of sporadic protests and strikes in multiple towns and cities driven by concerns over water shortages, the economy and wider anger at the political system.

Journalists reported a heavy buildup of riot police Sunday night, including at least one armored personnel carrier, in the town of Karaj, just west of Tehran that has been a focal point of unrest. The internet was cut off in the area – part of a concerted effort to block reporting on the unrest which includes severe restrictions for foreign journalists

Iran: US 'isolated' as it braces for return of sanctions

Iran said the U.S. was "isolated" in its hostility toward the Islamic republic as it braced for the return of sanctions against a backdrop of political turmoil inside the country.

"Of course, American bullying and political pressure may cause some disruption, but the fact is that in the current world, America is isolated," Foreign Minister Mohammad Javad Zarif told reporters, according to the semi-official ISNA news agency.

Rouhani is reportedly due to give a televised address to the nation at 9:40 p.m. local time to outline plans for tackling the currency decline and the impact of sanctions.

The Iranian government eased foreign exchange rules on Sunday, allowing unlimited tax-free currency and gold imports, and reopening exchange bureaus after a disastrous attempt to fix the value of the toman in April led to widespread black market corruption.

He said that the unilateral decision on sanctions was unacceptable and contradictive to internationally acknowledged policies.

"The unilateral punishment of our neighbors and international actors by the U.S. does not aim to ensure peace and security. It is necessary to emphasize that the U.S. policies serve Israel's interests and are devised by Israeli lobbyists," Yılmaz said, adding that, "The steps the U.S. has taken in the Middle East aim to solidify Israel's security and American interests."

He stressed that exerting economic pressure on Iran and inciting a domestic uprising is a grave threat to regional security.