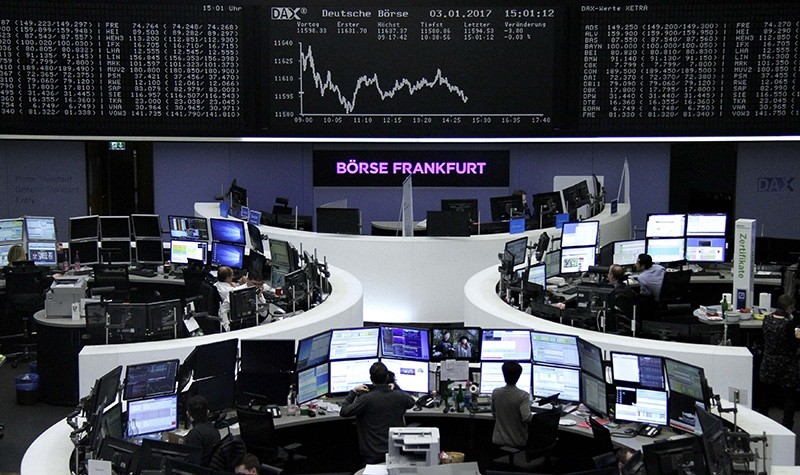 European shares bounced back Tuesday as the Turkish lira strengthened, the U.S. dollar plunged from its highest in 14 months and treasuries fell, thanks to reassurances from the Central Bank and government.

The dollar tumbled more than 5 percent to 6.4591 against the Turkish lira after opening the day at 6.8839, after the Central Bank of the Republic of Turkey (CBRT) took action Monday to provide liquidity. The country's benchmark stock exchange index BIST-100 surged, even as tensions between Ankara and Washington continue to run high.

Investor confidence was also boosted as Minister of Treasury and Finance of Turkey Berat Albayrak announced he would hold a conference call with investors from the United States, Europe and the Middle East on Thursday, his first since assuming the post two months ago.

Banks had been the worst hit by the attacks on Turkey's economy, taking the index to a 21-month low.

Italy's FTSE MIB jumped 0.8 percent with banks gaining as bond yields fell after the government said it had agreed to preserve the stability of state finances and lower public debt.

Swiss dental implant maker Straumann was a top gainer after results, up 4.6 percent after it raised its full-year revenue target as organic sales growth exceeded 20 percent for the first time in 10 years.

German utility RWE rose 2.4 percent after it said its Innogy deal was on track and reported in-line first half profits.

Siltronic shares fell 4.8 percent, with traders saying Citi cut its recommendation on the stock to "neutral."

A boost to "overweight" from Barclays sent Saipem shares up 2.6 percent.

Asian markets were "relatively more resilient" to Turkey's economic challenges than South Africa and Latin America were, said Philip Wee and Radikha Rao of DBS Group in a report. But they said the U.S. tariff hike on Turkish steel at a time of "considerable stress" tells emerging markets not to expect Washington's help to "calm their markets."

''Expect more stress if the Fed continues to look past the emerging market turmoil (like it did in May) and keeps to gradual rate hike path," they said.