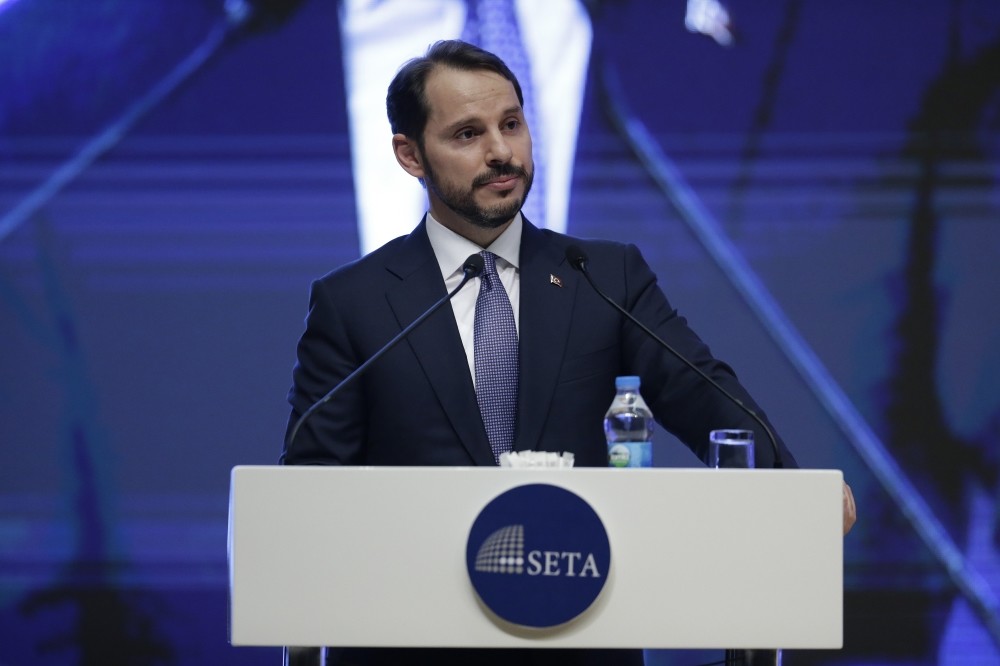 The global reserve currency the U.S. dollar has lost its credibility in international trade, Treasury and Finance Minister Berat Albayrak said in his address to a symposium organized by the Foundation for Political, Economic and Social Research (SETA) on the 17th anniversary of the foundation of the Justice and Development Party (AK Party). Referring to recent developments in the financial markets which led to a run on the Turkish lira against the U.S. dollar, Minister Albayrak once again emphasized that the attacks orchestrated by the U.S.-led financial markets pose great risks for all countries and everyone clearly sees that the greenback is no longer reliable.

Albayrak emphasized that the dollar is being used as political punishment by the U.S. and this does not comply with diplomatic ethics, proving that the process Turkey is experiencing is unjust. "Many a country have come to realize that the manipulations via the greenback are becoming a worrying and threatening weapon for them," Albayrak said, "Now, countries are looking for ways to use a common currency or their local currencies in bilateral trade." Minister Albayrak emphatically stated that the search for an alternative to the U.S. dollar in international trade will create a butterfly effect and shake global trade to its roots, changing all the balances and dynamics.

In line with the global trends, Albayrak underscored that Turkey will continue taking concrete steps increasing the share of local currencies in its trade with partners. "We will keep taking measures to strengthen the Turkish lira in the upcoming period," he said.

The issue of looking for an alternative medium for financial transactions that can decrease the domination of the dollar in international trade has been a hot topic recently, particularly after the reimposition of U.S. sanctions on Iran and Russia, leading to the rise of critical voices against the greenback and concrete solutions to increase the share of other currencies in trade and financial markets.

Turkey's call to main trading partners, Russia, China and İran to use local currencies in trade have been welcomed.

The Kremlin spokesperson Dmitry Peskovsaid Monday Moscow aims to use national currencies in trade with Turkey, instead of dollars or euros. "The use of national currencies in mutual trade transactions is a topic that has been raised by the Russian side at various levels, including at the highest levels, for a long time," he said. "President Putin has repeatedly spoken of such a possibility and, moreover, of such expediency. Of course, this is subject to scrupulous study, scrupulous calculations, but this is what we seek in our bilateral trade and economic relations, and what has been repeatedly discussed at bilateral Russian-Turkish talks," he added.

In April, Turkey and Iran issued the first letter of credit in the form of a national currency swap to exchange the Iranian rial and Turkish lira. The swap will ease trade, transactions between the two countries and lower foreign currency risks after both currencies faced depreciation recently.

Meanwhile, the U.S. dollar's share of currency reserves reported to the International Monetary Fund (IMF) fell in the first quarter of 2018 to a fresh four-year low, while the euro, yuan and sterling's shares of reserves increased, according to the latest data from the IMF.

China's share of allocated currency reserves increased for a third straight quarter to 1.39 percent. The IMF had reported the yuan's share of central bank holdings for the first time in the fourth quarter of 2016.

The yen's share of currency reserves retreated to 4.81 percent from the prior quarter's 4.89 percent, which was its biggest since the fourth quarter of 2002.

Albayrak will hold the teleconference with foreign investors and convey the messages related to recent economic developments in the country.

Some 750 to 1,000 investors from the U.S., Europe and the Middle East are expected to participate in the meeting.

According to the information obtained from bankers, Citi, Deutsche Bank, DOME Group and HSBC will organize the meeting.