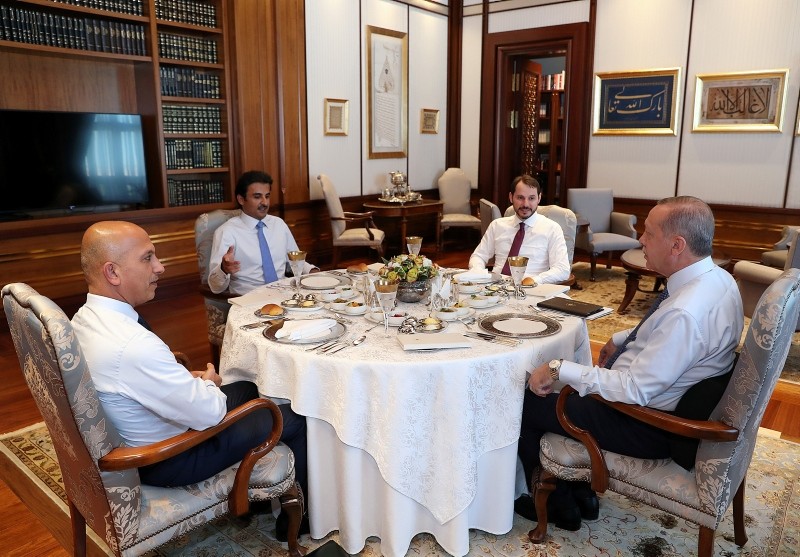 Qatar's Emir Sheikh Tamim bin Hamad Al-Thani visited Ankara Wednesday in an apparent show of support for Turkey, pledging $15 billion in direct investments in the country that found itself embroiled in a crisis with the U.S.

The Qatari emir was welcomed at the Presidential Complex in Ankara in an official ceremony. He met President Recep Tayyip Erdoğan. The two leaders discussed the U.S. sanctions against Turkey, bilateral relations as well as other regional developments. They were accompanied by Turkish Treasury and Finance Minister Berat Albayrak and his Qatari counterpart Ali Sharif Al-Emadi.

Al-Thani said that the investment package will soon be brought to life.

"We care about this visit. It signifies that Qatar is beside Turkey," Presidential Spokesperson İbrahim Kalın told a press conference before Wednesday's meeting.

Earlier Monday, Erdoğan had a phone call with Al-Thani. They discussed bilateral relations and regional issues, confirmed presidential sources on condition of anonymity. They also highlighted the importance of further improving bilateral ties, the source added.

Qatar, he said, would continue supporting Turkey, as it did during the defeated coup attempt in mid-2016.

Ankara and Doha, he added, shared common points of view on a number of regional and international issues.

Al Shafi went on to note that Qatari Emir Tamim bin Hamad's visit to Turkey on Wednesday demonstrated the "depth of Qatar-Turkey relations".

The emir's visit, the diplomat said, "will serve to confirm the close links between the Qatari and Turkish people and their common positions vis-à-vis the many challenges they face".

According to Al Shafi, Qataris have recently bought tens of millions of dollars' worth of Turkish lira with a view to supporting the Turkish economy.

Describing Turkey as a "strategic ally", the ambassador added: "Our strong relations with the Republic of Turkey enjoy a special status among our people."

The Qatari government has denied the accusation, blasting the blockade as unjustified and a violation of international law. Amid the rift, Turkey has provided an increased support to Qatar, boosting food and other exports to meet any shortages.

Turkey also maintains a military base in Qatar. The two countries inked a military cooperation deal in October 2014, allowing for joint training exercises, cooperation on defense manufacture and the deployment of Turkish forces on Qatari territory.

The first batch of Turkish troops arrived in capital Doha on Oct. 4, 2015, and the Turkish flag was hoisted at the military base four days later.