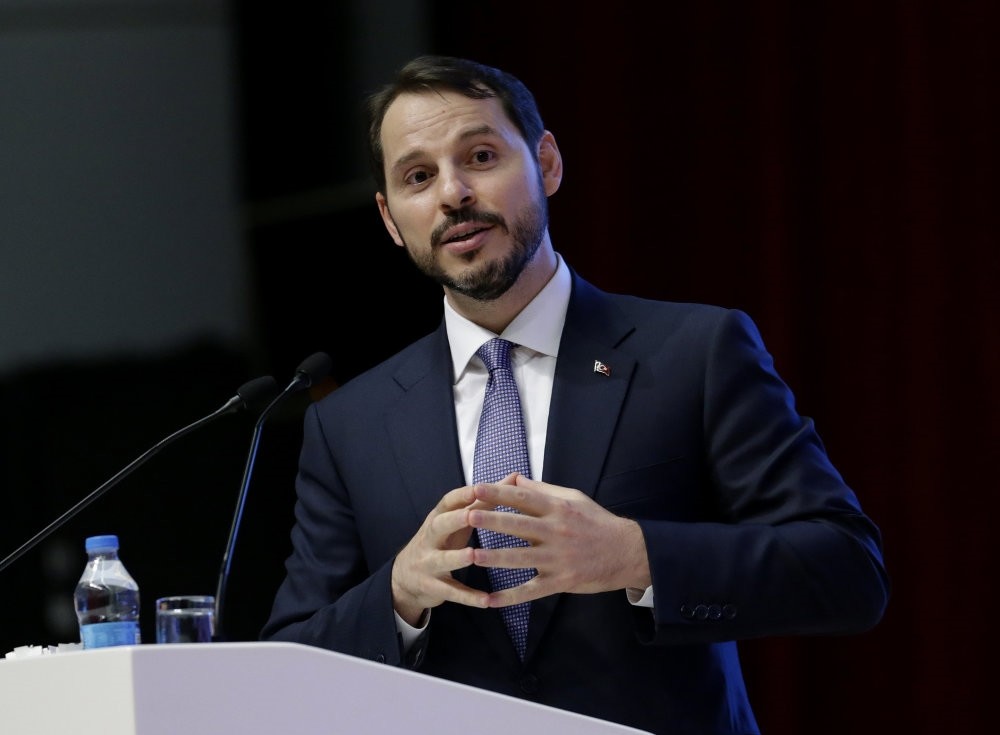 Treasury and Finance Minister Berat Albayrak addressed 6,100 investors from around the world and highlighted that Turkey will continue implementing fiscal discipline with resolution.
by Daily Sabah Aug 17, 2018 12:00 am

In a conference call yesterday addressing almost 6,100 investors from Europe, the Middle East, U.S. and other parts of the world, Treasury and Finance Minister Berat Albayrak underscored Turkey's intention to decrease inflation to single digit, maintain fiscal discipline while continuing to invest in infrastructure projects for long-term growth. He also said that there will be a close monitoring of market expectations.

During his speech, where the minister explained the details of Turkey's plan to ward off the recent developments that led to short-term turbulence in the country's economy, Albayrak drew attention to the country's aim to diversify its investor portfolio like it did on Wednesday by securing a $15 billion direct investment from Qatar. In his first address of foreign investors from all around the world, Albayrak outlined a detailed map Turkey will follow in the upcoming period and highlighted Turkish economic management's determination to continue fiscal discipline.

"With new macro prudential measures and tight fiscal policy, we will achieve more sustainable growth," Albayrak said. "We instructed all our ministers for an ambitious saving program." In a bid to support the government's commitment to fiscal discipline, he announced that the government will see certain expenditure cuts and the revenue side was showing a positive performance. He added that the Treasury and Finance Ministry expects a TL 6 billion ($1.04 billion) primary surplus for the end of this year.

While the ministry will continue working to reduce inflation to single digits, the minister said, it will also prioritize the successful implementation necessary structural reforms.

Turkey will come out of the current currency volatility stronger, adding that the Turkish banking sector is healthy and strong.

According to Albayrak, the Cabinet will not hesitate to provide support to the banking sector, which is capable of managing current volati

lity, and there has not been a major deposit flow from banks lately.

Following the Cabinet meeting yesterday, Presidential Spokesperson İbrahim Kalın also referred to Albayrak's meeting with investors and indicated that the Turkish banking sectors is one of the strongest in the world with solid fundamentals.

In a similar vein as Albayrak, Kalın also highlighted that Turkey will turn this currency crisis stimulated by political tension into an opportunity. The implementation of short, medium and long term measures will make the Turkish economy stronger, he added.

Albayrak also said Turkey had already taken measures to curb FX funding, and corporations are in a comfortable position to meet short-term liabilities as no capital controls are on the agenda. The lira has nosedived in recent weeks, hitting a record low of 7.24 this week after a diplomatic and trade dispute with the U.S. instigated by U.S. President Donald Trump over pastor Andrew Brunson, who is under house arrest in Turkey because of his alleged ties with the Gülenist Terror Group (FETÖ) and the PKK, a U.S.-designated armed terrorist organization.

With a number of measures taken by the Central Bank of Republic of Turkey and the Banking Regulation and Supervision Authority (BDDK), the greenback started to retreat against the lira.

The national currency recovered the day after Qatar pledged $15 billion in investments to help Turkey's economy. The lira strengthened some 4 percent against the dollar, to around 5.75 per dollar.

Following Albayrak's speech, the gains in the lira continued, and it was trading at 5.70 per dollar by 5:45 p.m. local time.

Minister Albayrak specifically highlighted that the central bank composes its monetary policy with full independence and the treasury and finance ministry will back every step taken by the bank.

He also stated that in order to inform investors about the monetary policy of the central bank in a more detailed fashion, another conference call with CBRT Governor Murat Çetinkaya in attendance will be held at the soonest possible date.

Turkey has no plans to seek financial assistance from the International Monetary Fund (IMF) and instead will focus on attracting foreign direct investment, the minister said, adding that the government will reach its fiscal discipline goals by making certain expenditure cuts.

The minister also said the government expected a more modest growth from the Turkish economy, which expanded 7.4 percent in 2017.

Stressing Turkey's dedication to free market rules, the treasury and finance minister once again underlined, "Turkey has never taken non-market measures, and such measures are not on the agenda and capital controls are not on our agenda and never will be."

Responding to a question related to the Halkbank case in the U.S., Albayrak emphatically stated that Turkey does not expect any fines against the state-owned Halkbank.

Upon Albayrak's statement, Halkbank shares on the Borsa Istanbul stock exchange rose by 4.13 percent and were trading at TL 6.05.

Deputy CEO of Halkbank Mehmet Hakan Atilla, who was arrested in the U.S. in March 2017 two and half months after the arrest of Brunson in Turkey, was tried and convicted on five charges, including violating controversial U.S. sanctions on Iran, crimes to deceive the U.S. and defrauding U.S. banks, while they acquitted him on a single account of money laundering.