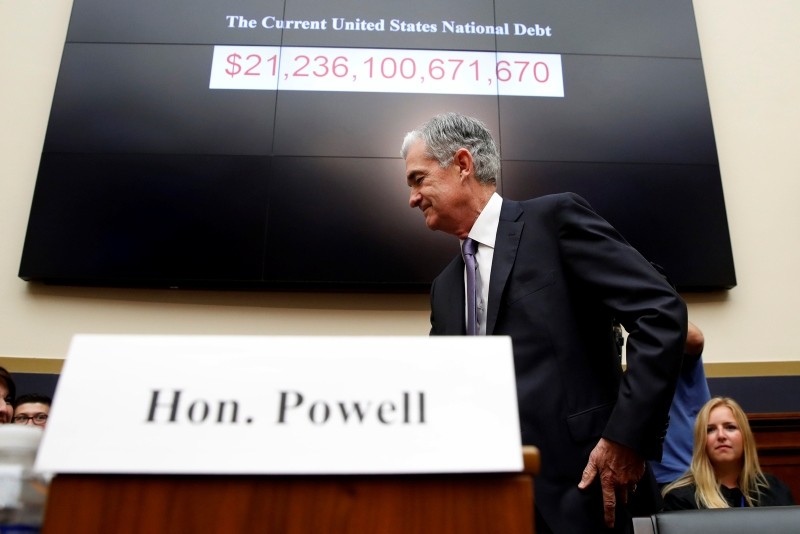 n this July 18, 2018, file photo Federal Reserve Board Chair Jerome Powell arrives to testify at a House Committee on Financial Services hearing on Capitol Hill in Washington. (AP Photo)
by Aug 24, 2018 12:00 am

The Federal Reserve's steady interest rate hikes are the best way to protect the U.S. economic recovery and keep job growth as strong as possible and inflation under control, Fed Chair Jerome Powell said on Friday in a high-profile endorsement of the central bank's current approach to policy.

"The economy is strong. Inflation is near our 2 percent objective, and most people who want a job are finding one... If the strong growth in income and jobs continues, further gradual increases in the target range for the federal funds rate will likely be appropriate."

Powell's comments were not a direct response to Trump's criticism that he is "not thrilled" with the Fed raising rates as he is trying to stimulate economic growth. However, the Kansas City Fed's annual conference here is among the central bank's higher profile annual events, drawing international media attention and an audience including representatives of other nations' central banks.

The research theme this year involves change in market structure and Powell used that topic to elaborate on why shifts in concepts like the level of "full employment" and the neutral rate of interest justify gradual rate increases. He said Fed mistakes of the past, such as a misestimation of full employment that allowed inflation to take off in the 1970s, mean the central bank today should not assume its current estimates of those economic variables are precise.

The Fed "has been navigating between the shoals of overheating and premature tightening with only a hazy view of what seem to be shifting navigational guides," Powell said. With unemployment so low, "why isn't the (Federal Open Market Committee) tightening monetary policy more sharply to head off overheating and inflation? With no clear sign of an inflation problem, why is the FOMC tightening policy at all, at the risk of choking off job growth and continued expansion?"

The resolution, he said, is to move carefully.

"I see the current path of gradually raising interest rates as the FOMC's approach to taking seriously both of these risks."

The Fed is expected to raise rates in September, perhaps again in December, and continue what it refers to as "normalization" into 2019.