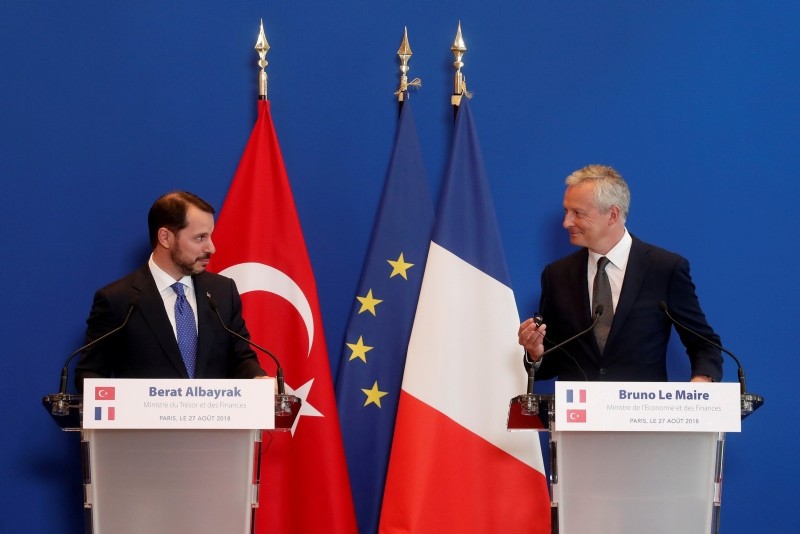 Treasury and Finance Minister Berat Albayrak (L) and his French counterpart Bruno Le Maire and Turkish attend a joint news conference after a meeting at the Bercy Finance Ministry in Paris, France, August 27, 2018. (Reuters Photo)
by Daily Sabah with Reuters Aug 27, 2018 12:00 am

During his meeting with French Minister Le Maire, Treasury and Finance Minister Albayrak warned that the U.S. was isolating itself from its allies and that Turkey and France have decided to act jointly against U.S. unilateralism

The recent tensions that the U.S. has created with its sanction policies faced a joint response from Turkey and France on Monday when Treasury and Finance Minister Berat Albayrak met with French Finance Minister Bruno Le Maire in Paris.

In a joint press conference after the meeting, the two ministers stressed the importance of Turkey's stability, as the two countries decided to act jointly in various areas.

Noting that the meeting with Le Maire was warm and fruitful, Albayrak stated that Turkey's stability was in the interest of Europe, and they have decided to act jointly with France as allies.

Albayrak said that he and his French counterpart discussed acting together at the World Trade Organization (WTO) on tariffs imposed by the U.S. on Turkey, the European Union and other countries, while improving bilateral trade.

Following the hour-long meeting with Albayrak, French Minister Le Maire said, "The stability in Turkey is in the interest of everyone in Europe and Turkey." Turkey resuming structural reforms with all means available is of vital importance, added Le Maire.

The two parties discussed the latest decisions on sanctions in detail according to Albayrak, as well as steps to support global trade and regional stability. Albayrak said France, which supported Turkey in this regard, showed a historic stance. "Since the first day, France has taken a very good stance against these steps that have targeted regional and global economy. I thank my dear counterpart for this," he said.

He added that significant gains and synergies can be achieved with mutual understanding and common sense, pledging Turkey will take important steps to attain financial architecture against global testing and competition.

Albayrak also stressed that with the announcement of new medium-term program, expected to be revealed first week of September, they would bring forward a much more powerful transformation in the economic sense.

Albayrak criticized U.S. economic sanctions targeting the Turkish economy, saying that they have the potential to cause instability in the region, which could in turn feed terrorism and the refugee crisis.

"The moves by the U.S. are isolating it from its allies; the dollar is losing its status as a global trade tool," warned Albayrak.

He also said that Turkey wants to boost trade with France from 14 billion euros ($16.33 billion) to 20 billion euros while using bilateral currencies or the euro instead of the U.S. dollar.

Turkey wants to take its relations with the EU into a new phase, especially at a time when its trade with the bloc is more important, Albayrak said, adding that recent unilateral steps taken by the U.S. had shown that relations between Turkey and the EU, namely France, were more important than ever.

The minister also said that France and Turkey shared the same position against the one-sided decisions by the United States regarding Iran, and that the allies had decided to take joint steps in this regard as well.

While the two ministers emphasized the significance of acting together against economic threats by the U.S., French President Emmanuel Macron, during a meeting yesterday with some 250 diplomats, lawmakers and international relations experts, called for Europe to stop relying on the United States for its military defense, adding that, "It is up to us to guarantee European security."

Earlier this month the two ministers had agreed to conduct joint action against U.S. sanctions targeting Turkey, according to ministerial sources.

Meanwhile, European leaders raised their voices to highlight the significance of the Turkish economy that has recently come under attack with the threatening economic showdown initiated by U.S. President Donald Trump.

The comments by European leaders come at a time when Turkey's ties with the its longtime NATO ally U.S. are strained due to a diplomatic and economic spat. The country has garnered extensive support from European partners such as France and Germany as well as Russia, China, Kuwait and Qatar against the unfriendly moves of the U.S. administration.

Macron also highlighted the importance of the Turkish economy's stability as he discussed economic relations with President Recep Tayyip Erdoğan during a phone call on Aug. 16.

The two presidents exchanged views on bilateral ties as well as regional matters, presidential sources said. They stressed the need to further develop economic and trade relations and mutual investment between Turkey and France.

Turkey and European countries have solid commercial and economic ties as the two sides have extensive bilateral investments and economic exposures to one another.

Last year, Turkey's exports to the EU totaled to 69.8 billion euros ($79.9 billion) and its imports from the union were recorded at 84.5 billion euros.

The row between Turkey and the U.S. escalated when President Trump decided to impose sanctions on Turkish ministers Süleyman Soylu and Abdülhamit Gül on Aug. 1 and also increase tariffs on imported steel from Turkey by 50 percent and aluminum by 20 percent, respectively, while threatening the country with more sanctions over pastor Andrew Brunson.