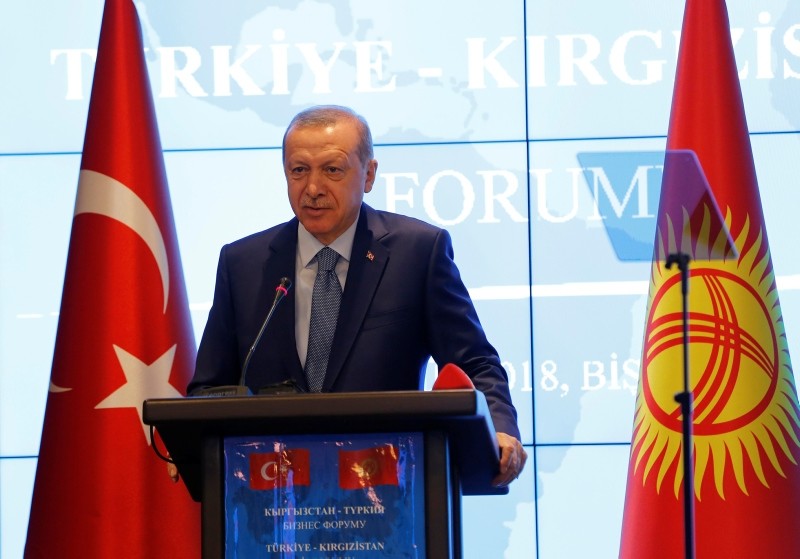 President Recep Tayyip Erdoğan on Sunday said that the U.S. dollar's reign on global trade should come to an end by adopting trade with local currencies between countries.

Speaking at Turkey-Kyrgyzstan Business Forum in Kyrgyz capital Bishkek, Erdoğan said that dependence on the U.S. dollar was becoming more of a burden each passing day instead of a convenience.

"The attacks on our country is a clear example of this. They try to cast doubt on Turkey's strong and solid economy via currency manipulations," Erdoğan said.

Talking about international credit rating businesses such as Moody's and Fitch, Erdoğan said every move by those firms were "politicized" and called them "insidious" and "dishonest."

Erdoğan said Turkey is resolved to establish independence in economy, defying the attacks targeting its economy.

Reminding Turkey's willingness to trade with its top trade partners like China and Russia in local currencies instead of the U.S. dollar, Erdoğan said that Turkey was in the process of finalizing the move and added: "These last events have showed how right we are."

Erdoğan also said that Turkey would consider trading with Kyrgyzstan in local currency as well.

The steep fall in the Turkish lira for the last couple of weeks has not been possible to explain with the macroeconomic fundamentals of the Turkish economy, many bankers, government officials and economists have emphasized. The high volatility in the exchange rate was seen as the result of unsubstantiated manipulations on the Turkish lira, which were deemed as the main strategy of an economic war waged against Turkey by Trump.

Political tensions between Ankara and Washington had sparked worries in markets in August, after Trump threatened to use economic pressure over an American pastor who faces terrorism-related charges in Turkey.

Trump ramped up his attack on Turkey on Aug. 10 by doubling U.S. tariffs on Turkish aluminum and steel imports to 20 percent and 50 percent, respectively.