President Erdoğan proposes to trade without US dollar 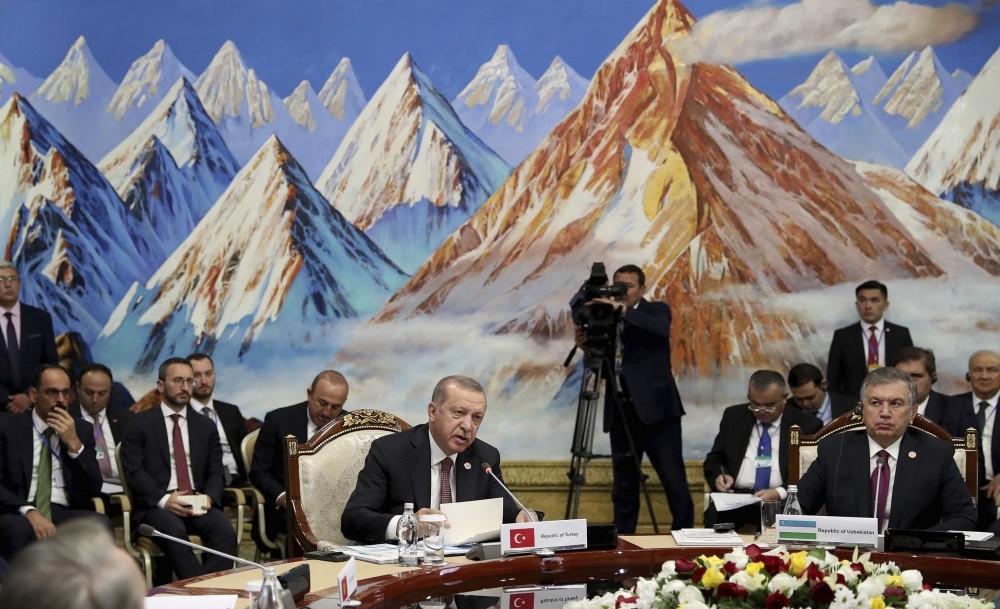 Addressing the 6th Summit of Turkic Council, President Erdoğan reiterated that global trade's dependence on the dollar has become an increasingly large problem, proposing the use of national currencies in trade instead

InternatIonal trade's dependence on the U.S. dollar should be decreased as it has become an obstacle for Turkey, President Recep Tayyip Erdoğan said yesterday. Erdoğan attended the 6th Summit of the Turkic Council at the Rukh Ordo Cultural Center in Kyrgyzstan, where he said, "We are proposing to trade in our own currencies rather than the U.S. dollar." The summit was hosted by Kyrgyzstan's President Sooronbay Jeenbekov.

In addition to the presidents of Turkey, Azerbaijan, Kazakhstan and Uzbekistan, Hungary - as an observer state - was represented by its prime minister.

President Erdoğan was in Kyrgyzstan on a three-day official visit to the country, which started on Saturday.

During his speech, President Erdoğan said, "Our age also offers us important opportunities for the development of transportation and communication networks. In this respect, we attach importance to the Caspian Transitional East-West Middle Corridor initiative, which reaches China passing through the Caucasus and Central Asia. The most important pillar of this project, known as the 'Modern Silk Road-Middle Corridor,' is the Baku-Tbilisi-Kars Railway Project, which we are running together with Azerbaijan. This way, a train departing from western Europe can uninterruptedly reach the Caspian coast, from where it can reach Shanghai and Seoul via the Aktau Port. This major transportation line will contribute to boosting the welfare of our people and to the development of our relations. We also attach importance to increasing cooperation in the field of energy. The Baku-Tbilisi-Ceyhan Crude Oil Pipeline and Baku-Tbilisi-Erzurum Natural Gas Pipeline projects are the most important fruits of this cooperation."

Azerbaijani President Ilham Aliyev noted that the member states of the council must take additional steps to improve economic cooperation and increase the trade volume between them.

Aliyev indicated that Azerbaijan has invested $14 billion in Turkey in recent years. "Turkey has invested so much in Azerbaijan as well. This will rise to $20 billion soon. This is the symbol of our friendship and brotherhood. We are very glad that Turkey comes out honorable from all the tests. In economic tests, we always side with each other," he said.

Meanwhile, Kazakhstan's President Nursultan Nazarbayev explained that the geopolitical situation in the world is complicated.

"The economy is not fixed, we know the reasons. Sanctions and taxes are causing investments to decline. They all affect us; we have to solve all of them. We want to present a lot of projects. It is important to maintain economic relations with concrete steps, we need to use them well," he said.

On Sunday, Turkey and Kyrgyzstan pledged to further strengthen their bilateral economic ties, while emphasizing the importance of using domestic and national currencies for trade between the countries and increasing the bilateral trade volume to the previously set target of $1 billion.

Delivering a speech at the Turkey-Kyrgyzstan Business Forum in the Kyrgyz capital Bishkek, President Erdoğan underlined that trade wars and protectionist tendencies have necessitated the development of new strategies in many areas. He reiterated that international trade's dependence on the dollar is becoming an increasingly larger problem.

"We need to gradually end the sovereignty of the dollar by using domestic and national currencies among us," he said, adding that countries, firms and traders not only overcome the inherent problems of trade, but also face challenges such as exchange rate pressures emanating from dependence on the dollar.

"This system, founded on the claim of 'facilitating trade,' has turned into the greatest impediment to free global trade," Erdoğan said. "Currency manipulations aim to cast doubt on Turkey's strong and solid economy."

"They try to cast doubt on Turkey's strong and solid economy via currency manipulations," he added.

Political tensions between Ankara and Washington had sparked worries in markets in August after U.S. President Donald Trump threatened to use economic pressure over an American pastor, who has been held on espionage and terror-related charges.

Andrew Brunson is being tried by the Turkish judiciary because of his links with the Gülenist Terror Group (FETÖ) and PKK, a Kurdish separatist armed group designated as a terrorist organization by the U.S.

He is currently on house arrest in Turkey's İzmir province, which has led Trump to wage an economic war against Turkey by imposing sanctions on the country's ministers and additional tariffs on steel imports.

The Turkish lira has depreciated more than 45 percent against the U.S. dollar since the beginning of this year with most of the loss happening in August, which witnessed the escalation of a diplomatic crisis between Ankara and Washington.