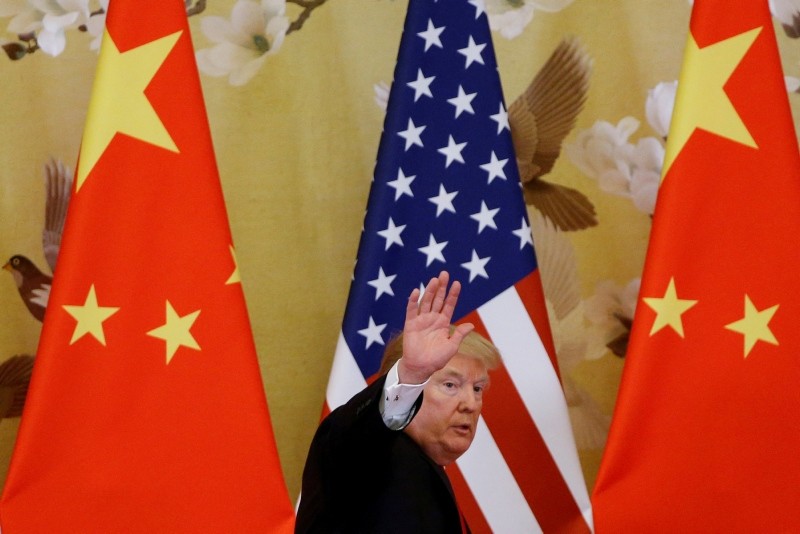 U.S. President Donald Trump said on Friday that he has tariffs ready to go on a further $267 billion worth of Chinese imports, as the world awaits his decision on imposing levies on $200 billion worth of the Asian nation's goods.

"The $200 billion we are talking about could take place very soon depending on what happens with them. To a certain extent its [sic] going to be up to China, Trump said. "And I hate to say this, but behind that is another $267 billion ready to go on short notice if I want. That changes the equation."

Earlier on Friday White House economic adviser Larry Kudlow said Trump will not make any decisions on his threatened tariffs on another $200 billion worth of Chinese goods before officials evaluate public comments on them. The U.S. Trade Representative's office received nearly 6,000 comments during the public comment period on the proposed levies, which ended Thursday night.

With U.S. President Donald Trump gearing up to impose tariffs on $200 billion in Chinese goods and Beijing certain to retaliate against any measures, the world's two biggest economies are locked in an escalating trade war, with no resolution in sight.

The world's two largest economies have already applied tariffs to $50 billion of each other's goods. Talks aimed at easing tensions ended last month without major breakthroughs, and Washington appears emboldened by a sell-off in Chinese markets and a weakening economy.

China is planning two choreographed celebrations of free trade – a major import fair in November and the 40th anniversary in late December of its move toward market reforms. However, Chinese government advisors are tamping down expectations either occasion will yield measures that could defuse tensions.

"China seems unable or unwilling to announce major liberalizations that could be termed 'confidence building measures' or 'down payments' on expected near-term reforms," Craig Allen, president of the Washington-based U.S.-China Business Council, said in a letter to members over the weekend.

"We know that the President has received reports that the Chinese economy is struggling – reports that we believe are overstated – and thus he may believe that additional pressure might be effective in the short-term," Allen said.

The Trump administration is ready to move ahead with a next round of tariffs after a public comment period ends at midnight in Washington on Thursday, but the timing is uncertain, people familiar with the administration's plans told Reuters.

Trump said he was not prepared to make a deal with China "that they'd like to make."

"We'll continue to talk to China," he said at the White House on Wednesday.

Given the smaller amount of goods China imports from the United States on which it could slap duties, Beijing has vowed to hit back with unspecified "qualitative" and "quantitative" measures, actions perceived within the U.S. business community as likely to be increased customs and regulatory scrutiny.

Beijing appears to be bracing for a long fight.

Official Chinese media is asserting that Trump's trade war is aimed at containing China's rise, a perception solidifying Beijing's resolve not to buckle under U.S. demands.

In light of such a U.S. agenda, China should "maintain strategic determination" and "take care of our own matters", Long Guoqiang, vice president of the State Council's Development Research Center, wrote in the People's Daily.

"The Soviet Union was pulled into an arms race in the Cold War. Japan's economy became a bubble in a trade war. These profound lessons are close at hand," Long said.

While U.S. businesses in China do not yet appear to face widespread retaliation, some company officials have told Reuters they are bracing for blowback. Some are shifting supply chains to avoid tariffs.