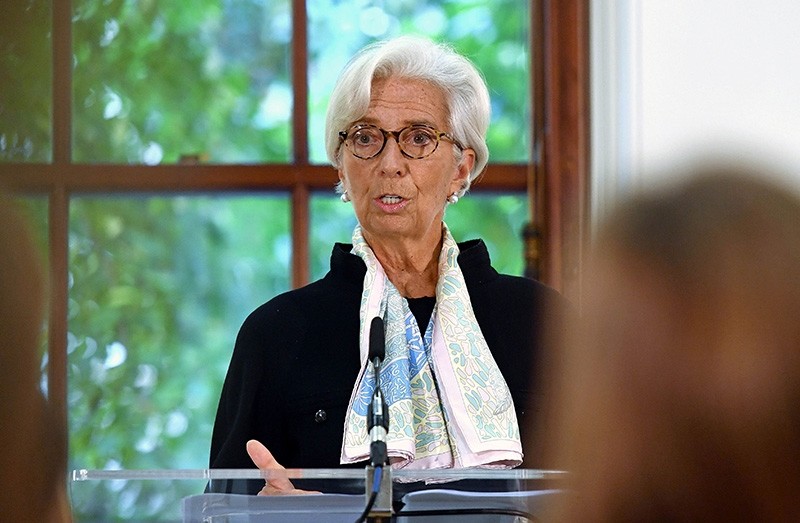 International Monetary Fund (IMF) managing director Christine Lagarde speaks at a press conference to mark the publication of the 2018 Article IV assessment of the United Kingdom at the Treasury in central London on Sept. 17, 2018. (AFP Photo)
by Sep 17, 2018 12:00 am

Britain's economy would suffer "substantial costs" should it leave the European Union in March with no divorce agreement, the International Monetary Fund warned Monday.

Brussels and London have failed to resolve "fundamental" aspects of Brexit and this could leave London defaulting to World Trade Organization (WTO) tariffs, the IMF said in its annual outlook on the U.K. economy.

"Fundamental questions -- such as the future economic relationship between the two and the closely-related question of the status of the land border with Ireland -- remain unanswered," the institution noted in a statement.

"Resolving these questions is critical to avoid a 'no-deal' Brexit on WTO terms that would entail substantial costs for the U.K. economy -- and to a lesser extent the EU economies -- particularly if it were to occur in a disorderly fashion," the IMF added.

The gloomy assessment contrasts with that of British Prime Minister Theresa May, who indicated last week that a no-deal Brexit would not be a disaster for Britain.

May remains confident of striking an acceptable deal with Brussels meanwhile.

The IMF forecast Monday that the British economy would grow by 1.5 percent in 2019, unchanged from its previous estimate.

However, the prediction is based on Britain sealing an EU divorce deal and transition period by the end of the year.