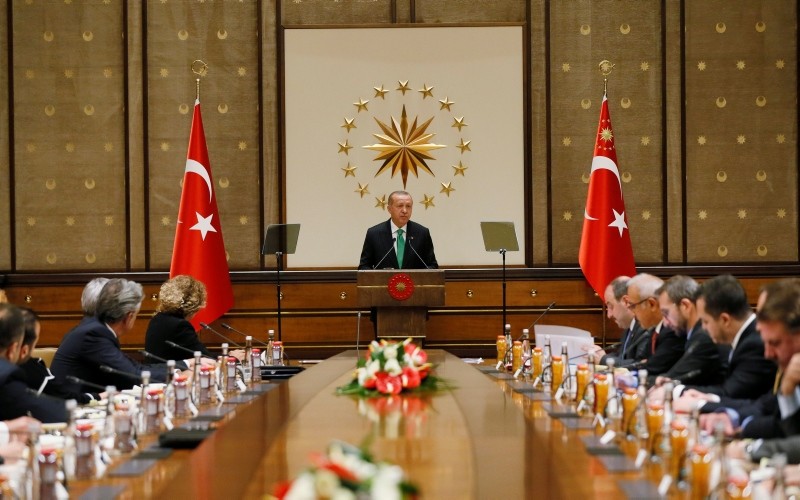 Relations between Washington and Ankara will strengthen with investment and trade, President Recep Tayyip Erdoğan said Wednesday in his speech to top U.S. executives at the Presidential Complex in Ankara.

Turkey will not compromise on free market principles, Erdoğan said according to the text of his speech seen by Reuters, and Turkey will continue to take every step so that businesses will not be harmed by trade measures taken against U.S. tariffs.

The president also said he did not find it right to mix up political issues and business matters, and called on the business world to cooperate while issues with the U.S. are solved via diplomacy.

Underlining that regulations for investment were all made by taking into account the feedback and proposals of the business world, Erdoğan said recent developments signified the importance of rebalancing in economy.

"Reforms are not one-time steps for our government. We see them as part of a dynamic and continuous process. We will continue to ensure necessary regulations in accordance with changing circumstances," he added.

Erdoğan is expected to meet with around 400 investors, senior executives of large funds, important players in the financial world and representatives of investment banks at the 9th Turkey Investment Conference.

According to the Trade Ministry, some 1,824 U.S. companies currently operate in Turkey.

The U.S. is also the second largest foreign direct investor in Turkey, the ministry's data showed. From 2002 to April 2018, the amount of FDI from the U.S. totaled around $11.4 billion, corresponding to 7.6 percent of the total FDI in Turkey.

However, Turkey-U.S. ties have soured over the last couple of years due to the U.S. support for terror groups that pose a national security threat for Turkey.

The U.S. military support for the PKK-affiliated People's Protection Units (YPG) in Syria, and its failure to extradite Gülenist Terror Group (FETÖ) leader Fetullah Gülen, who is in a self-imposed exile in Pennsylvania, have damaged ties between the two NATO allies. FETÖ staged the July 15, 2016, coup attempt in Turkey.

Meanwhile, the detention of pastor Andrew Brunson, who is under house arrest in Izmir, due to his alleged links with FETÖ and the PKK, and U.S. President Donald Trump insistence on his immediate release have also exacerbated the tension in bilateral relations.

Trump further heightened the tension by sanctioning two Turkish ministers in August and doubling the tariffs on Turkish steel and aluminum imports. He has also openly targeted the Turkish economy and currency – the Turkish lira, which has devalued over 40 percent since the beginning of this year.