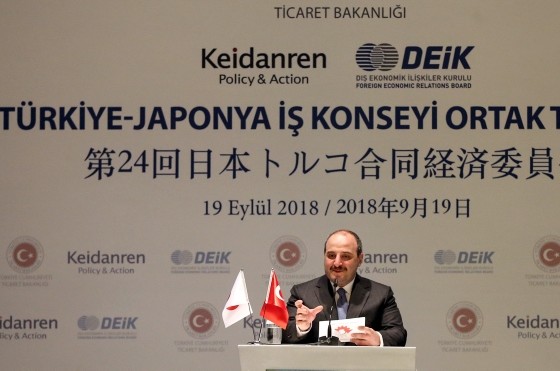 Turkey targets to complete Free Trade Agreement (FTA) negotiations with Japan by the first half of 2019 at the latest, Turkey's Industry and Technology Minister Mustafa Varank said on Wednesday.

The minister said that the Japanese companies have long been operating in Turkey and contributing to production, exports and employment in the country.

"According to June figures, some 227 Japanese companies are operating in Turkey," said Varank, adding that ministry aims to increase this number, especially in the high value-added sectors.

He noted that the agreement of Reciprocal Promotion and Protection of Investments between Turkey and Japan was signed in 1993.

"The negotiations are ongoing for the FTA, which will replace this agreement and bring new rights to investors," Varank said.

Varank highlighted that Turkey attracted some $14 billion in foreign direct investment (FDI) during the 1975-2002 period, while within the last 16 years, the FDI figure rose to $200 billion thanks to the political and economic stability in the country.

"Within this period, Japan with $2.7 billion ranked 15th among the countries that bring capital to Turkey. I think this figure does not reflect the current potential and I hope we will work harder and increase this figure," he said.

Varank also said that he plans to attend an investors meeting to be held in the capital Ankara at the end of 2018 with the Embassy of Japan, adding that he also plans to meet with investors in Tokyo at the beginning of 2019.

He also pointed to a project-based investment incentive system which started six years ago to strengthen the investment-production-export chain in the country.

"With the project-based investment incentive system, we have so far supported 23 projects with an investment amount of 135 billion Turkish liras [$21.5 billion]," the minister added.