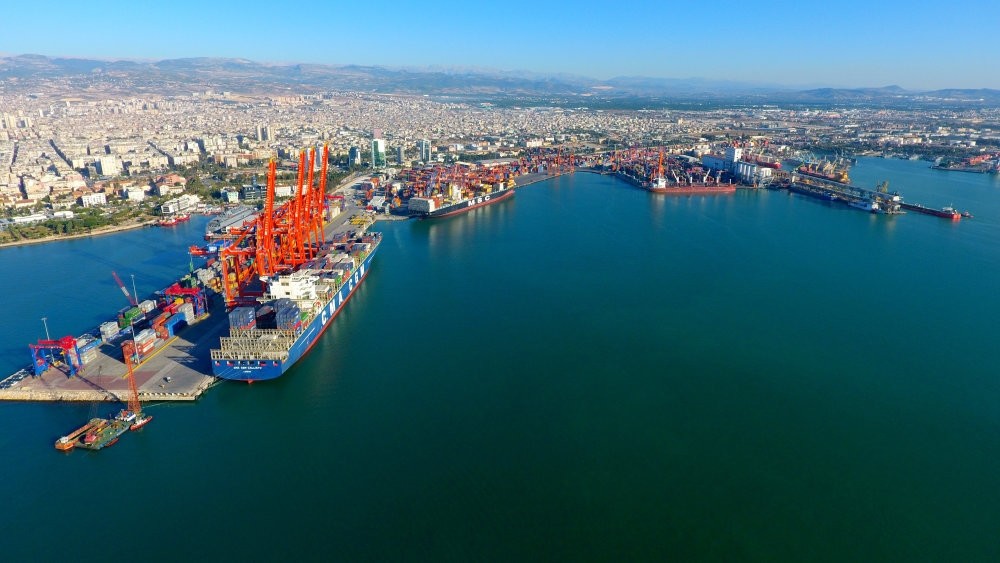 An aerial view of Mersin Port. The importance of Turkish ports are particularly highlighted by Chinese authorities who seek closer cooperation with Turkey within the framework of Belt and Road Project (BRI).
by Daily Sabah with DHA
Oct 03, 2018 12:00 am

With strong emphasis on Turkey's importance for the multinational ‘Belt and Road Initiative' Chinese officials have drawn attention to closer cooperation with Turkey by more investments in railways, maritime ports as well as higher trade volume

Fighting a trade war with the U.S., China is planning to expand political and economic cooperation with Turkey, which is located in the middle corridor of the "Belt and Road Initiative" (BRI) in order to emerge victorious from the ongoing trade war. Increasing efforts to reinforce connections with BRI countries, the Beijing government is looking to make more investments in Turkey as part of the grand project. In that regard, authorities in China called on Turkish and Chinese businesspeople to make more investments as China's interest in Turkey, an important gateway to Europe for the BRI project, has grown exponentially in recent years.

A multibillion-dollar project, the "Belt and Road Initiative" was launched by Chinese President Xi Jinping in 2013 to jointly build the Silk Road Economic Belt and the 21st Century Maritime Silk Road and connect China to Central Asia and Europe, an area spanning more than 65 countries. Popular estimates for Chinese investment under the BRI range from $1 trillion to $8 trillion, according to the Center for Strategic and International Studies.

Moreover, the American Enterprise Institute (AEI) and Heritage Chinese Global Investment Tracker, which tracks Chinese construction and investments across all sectors, puts the total at roughly $340 billion between 2014 and 2017.

Chinese firms that have been operating in Turkey's logistics, electronics, energy, tourism, finance and real estate sectors are expanding their businesses in the country and increased its operations in the country after the launch of the BRI. Aside from that, the Chinese government also encourages its citizens to visit BRI countries.

As part of the multinational BRI project, China has promoted infrastructure and transportation investments in the countries on the route. For instance, the Istanbul-Ankara high speed train, which has been operating since July 2014, was also constructed within the scope of the Turkish-Chinese partnership. Ankara is also negotiating with the Chinese government for the construction of the Edirne-Kars high-speed railway.

The Edirne-Kars high-speed railway will be integrated into the Baku-Tbilisi-Kars railway, which became operational in late October last year. This integrated network of railways will carry Chinese goods to Europe much faster. According to information provided by Chinese authorities, the duration of transporting goods from China to Turkey will be reduced to one day thanks to the broad railway network. Moreover, Chinese goods will be carried to the far end of Europe within 18 days.

China-Germany Railway Project Manager Gao Tian highlighted that Istanbul is a significant hub for the BRI project. "Istanbul is very significant for the Belt and Road project; therefore, we want to establish closer cooperation with Turkey," Gao said. He explained that the modern Silk Road project includes a southern line that will pass through Kazakhstan and arrive in Baku. From Baku, the line will reach Istanbul and Europe, Gao stated. A train that leaves Xian arrives in Germany within 16 to 18 days, he added. Each day, four to five trains will depart from Xian and each train will have 141 containers.

In addition to railway transport, Chinese goods will also be transported to Turkish ports with the Maritime Silk Road project, the maritime section of the BRI. In September 2015, Chinese giant container terminal operator Cosco Pacific, along with CMHI and CICI, acquired Turkey's third-largest port, Kumport in Istanbul, for $940 million. The company holds a 65 percent stake in the port.

Meanwhile, the volume of bilateral trade between Turkey and China was recorded at $26.3 billion in 2017. Turkey's exports to the country totaled nearly $3 billion, while its imports from China exceeded $23 billion.

Quanzhou Municipality Foreign Affairs and Overseas China Director Wen Jinhui stressed that more cargo ship traffic between Turkey and China is expected. "We expect more maritime bridging between Turkey and China, which is the starting point of the Maritime Silk Road. Quanzhou is a very important port for the BRI, and there is a strategically located port in Mersin. The modern Silk Road project will increase partnership with Turkey," he said.

Wen added that China is looking to establish a win-win relationship with Turkey, inviting Turkish investors to China. Quanzhou and the Yenişehir district of Mersin, a Mediterranean coastal city in Turkey, are sister cities, he added. Wen also stressed that it will be very beneficial for China to import goods it lacks from Turkey.

Underlining that Turkey is of strategic importance for China in the China-U.S. trade war, professor Sedat Aybar said China is aware that it has to launch initiatives in other areas in order to survive the trade war without losses. Indicating that, as of the next year, China will have a much closer relationship with Turkey thanks to direct investments in the country in line with the new Silk Road project, Aybar noted that the two countries will be indispensable trading partners. "Turkey is located right in the midst of geopolitical and geoeconomic formations. It is also a very important dimension for China to join the Western camp. As a country in the Western camp, Turkey's contribution to the People's Republic of China is crucial," he added. The BRI is a method of cooperation that will benefit all who support a path that leads to peace and friendship with common development and prosperity through increasing mutual understanding and trust and strengthening all sorts of sharing, the Chinese government stated. The BRI extends across the continents of Asia, Europe and Africa, connects the invigorated East Asian economic environment at one end to the developed European economy at the other end, and includes countries with enormous potential for economic development.

The Silk Road Economic Belt focuses on bringing China, Central Asia, Russia and (Baltic) Europe together; connecting China to the Persian Gulf and the Mediterranean along Central Asia and Western Asia; and connecting China to Southeast Asia, South Asia and the Indian Ocean. One main route of the 21st century Maritime Silk Road leads to Europe from the Chinese coast through the South China Sea and the Indian Ocean, while the other lead to the South Pacific from the Chinese coast through the South China Sea. The focus will be on the joint construction of a new Eurasia land bridge and the development of the China-Mongolia-Russia, China-Central Asia-West Asia and China-Indochina Peninsula economy corridors. On the marine side, the focus will be on jointly building trouble-free, safe and efficient transport routes by connecting the largest ports along the BRI. Members of the Chinese-Pakistani Economic Corridor and the Bangladesh-China-India-Myanmar Economic Corridor are also interested in the "One Belt, One Road" project, which requires closer cooperation and greater progress.