Defiant Italy says no turning back on budget despite EU 'threats' 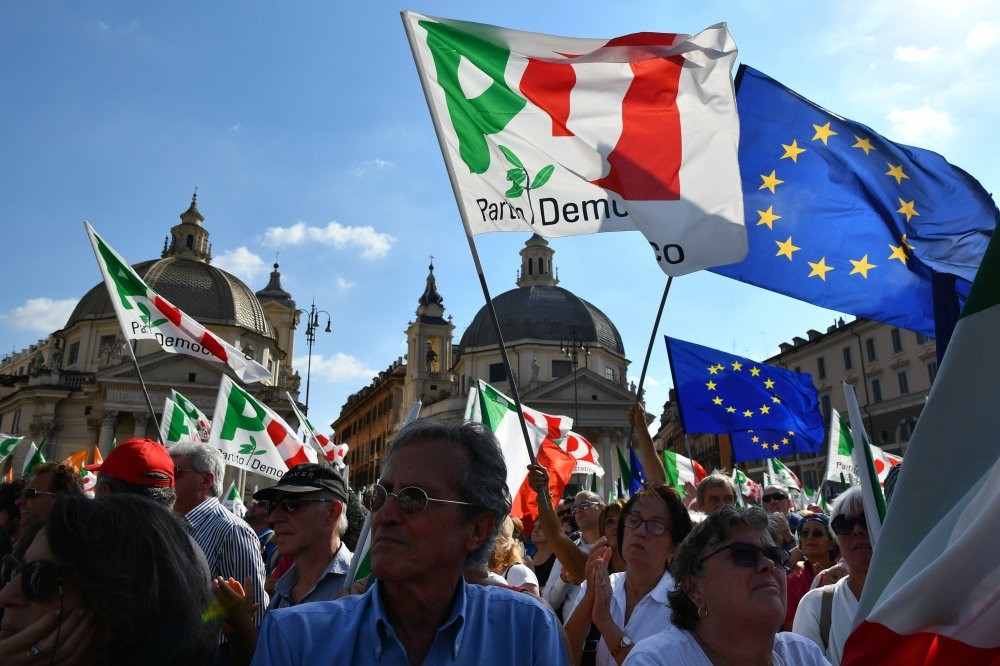 Supporters of Italy's centre-left Democratic Party (PD) wave party flags and flags of the European Union as they gather for a rally on Piazza del Popolo in downtown Rome to protest the government policies, Sept. 30.
by reuters
Oct 03, 2018 12:00 am

Italy's leaders refused to budge from new spending plans that have been spooking investors, pushing the eurozone's third-largest economy on a collision course with its EU partners

Italy defied pressure from Brussels and its euro zone partners yesterday to water down ambitious budget plans, threatening to sue EU officials it said were to blame for a deepening sell-off on Rome's financial markets.

The government last week set a deficit target of 2.4 percent of economic output for the next three years.

That tripling of its predecessor's goal by the EU's second most indebted nation unnerved investors and prompted criticism and calls for a rethink from the European Commission.

"We are not turning back from the 2.4 percent target... We will not backtrack by a millimetre," Luigi Di Maio, deputy prime minister and leader of the anti-establishment 5-Star Movement, said on RTL radio. As Italian bonds and banking shares sold off sharply, Di Maio said there was "no doubt" the leaders of France and Germany wanted the Italian government to fall, while one lawmaker suggested the country would be better off without the euro.

"The majority of the member states will clearly ask and demand that these (EU budget) rules are observed," Austrian minister Hartwig Loger, whose country holds the rotating EU presidency, told a news conference.

European Commission Vice President Valdis Dombrovskis said the current draft appeared not to comply with the rules, though Brussels was open to dialogue.

"The words and the threats of Juncker and other high EU bureaucrats continue to raise the spread (between Italian and German bond yields). We are ready to seek damages from those who want to harm Italy," Salvini said.

Italian 10-year bond yields peaked at a 4-1/2-year high yesterday and shares in Italian banks at a 19-month low. Both assets later trimmed those losses.

EU Commission President Jean-Claude Juncker drew parallels on Monday between Italy's budget plans and the finances of Greece, which emerged from its third international bailout as recently as August.

While the headline deficit of 2.4 percent that Italy is proposing would be within the Commission's 3 percent limit, under the current plan the structural - or underlying - deficit would rise, which runs contrary to EU rules.

The Commission is also concerned the proposal will increase Italy's huge public debt, proportionally the EU's second highest after Greece's. The government says the debt will fall as the expansionary budget spurs economic growth.

STRICT WITH ITALY TO SAVE EURO

On Monday, Juncker said the EU must be "strict" with Italy to avoid putting the euro project at risk.

Salvini called that a "threat" that "no-one in Italy is taken in by". He said the government's priority was to respond to its citizens' needs and criticism of its budget "will not stop us." The government's task is made harder by pressure on Italian bonds, intensified when eurosceptic League lawmaker Claudio Borghi said the country's economic situation would improve outside the euro zone.

Borghi did not suggest the government planned to drop the euro, and Di Maio and Prime Minister Giuseppe Conte later reiterated that Rome has no intention of leaving either the euro zone or the EU.

"The euro is our currency and for us it is unrenounceable," and declarations suggesting otherwise had nothing to do with government policy, Conte said on Facebook.

Di Maio said Rome's adversaries were hoping to use markets to weaken the coalition, but their bid would fail because the 5-Star/League alliance was more united than ever.

Economy Minister Tria, a moderating but seemingly increasingly isolated voice in government who is a member of neither party, left Luxembourg late on Monday for Rome to put the finishing touches to the budget plan.