Ankara, Bucharest agree to increase bilateral trade volume to $10B 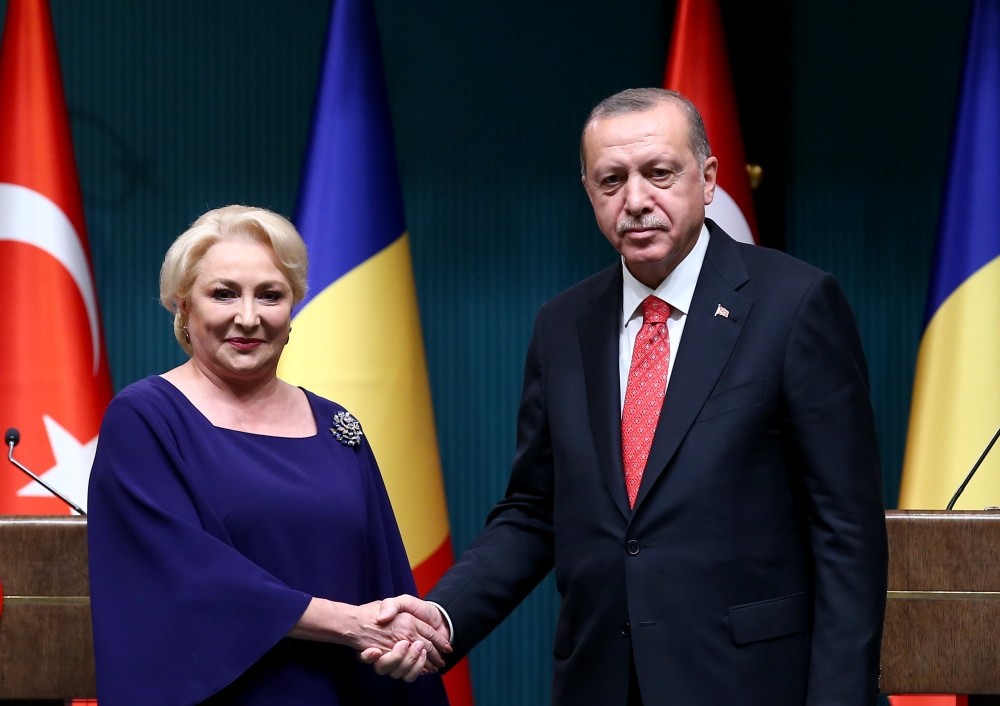 Ankara and Bucharest have agreed to increase their bilateral trade volume to $10 billion, President Recep Tayyip Erdoğan said late Monday. "We foresee an increase this year in our bilateral trade volume, which stood at around $6 billion in 2017. During our bilateral talks, we agreed to increase this to $10 billion," Erdoğan said at a joint news conference with Romania's Prime Minister Viorica Dancila at the Beştepe Presidential Complex in the capital Ankara. The Turkish government will continue to support local businesspeople's investments in Romania, Erdoğan noted.

"Over 15,000 Turkish companies are active in Romania, which operate in the fields of banking, media, construction and manufacturing. We will continue to support their investments in Romania," the president said.

He also called on the business community in Romania to invest in Turkey.

In their meeting, Erdoğan and Dancila discussed bilateral relations, as well as regional and international issues. They also exchanged views on bilateral cooperation, according to the president's office.

"The talks, due to be held within the framework of the visit, constitute an important opportunity to enhance Turkish-Romanian relations, which were raised to the level of a strategic partnership in 2011," a Turkish presidential statement read.

Relations between Turkey and the EU were also discussed with officials in Romania, which is set to take over the rotating presidency of the Council of the European Union on Jan. 1.

President Erdoğan said Romania's taking over of the rotating presidency of the Council of the EU will be an important opportunity for the relations.

He added Turkey will establish a close relationship with the EU during Romania's presidency in the first half of the next year. Dancila, for her part, said Romania and Turkey have huge potential and the two countries have carried out cooperation in the areas of defense, trade, education and culture. She also noted that Romania will continue to support Turkey's EU bid.

"In particular, we welcome Turkey's contribution to European security with appreciation," she added.

Erdoğan noted that Turkish-Romanian relations were raised to the level of a strategic partnership in 2011.

Dancila particularly emphasized the cooperation between the Turkish and Romanian authorities in terms of both bilateral and regional issues, including politics, defense, trade, education and culture.

Indicating that common values between Turkey and Romania are being shared in terms of security, Dancila noted that they are ready to further strengthen the mutual dialogue and cooperation.

She pointed to the strategic partnership between the two countries as "very robust," saying that the cooperation agreements signed on the occasion of the visit reflect the will of both sides to further develop the bilateral relations.

Touching upon the European country's cooperation with Turkey in the aftermath of the botched coup attempt on July 15, 2016, Erdoğan added that the government is in touch with Romanian officials regarding the steps to eliminate the activities of the Gülenist Terror Group (FETÖ), which orchestrated the attempted takeover.

He said Turkey expects from Romania to continue its cooperation against terrorist organizations.

"We will not forget the solidarity of Romania with our country after the July 15 FETÖ coup attempt," the president said. FETÖ and its U.S.-based leader Fetullah Gülen are accused of orchestrating the defeated coup of July 15, 2016 which left 251 people dead and nearly 2,200 injured. Ankara also accuses FETÖ of being behind a long-running campaign to overthrow the state through the infiltration of Turkish institutions, particularly the military, police and judiciary.