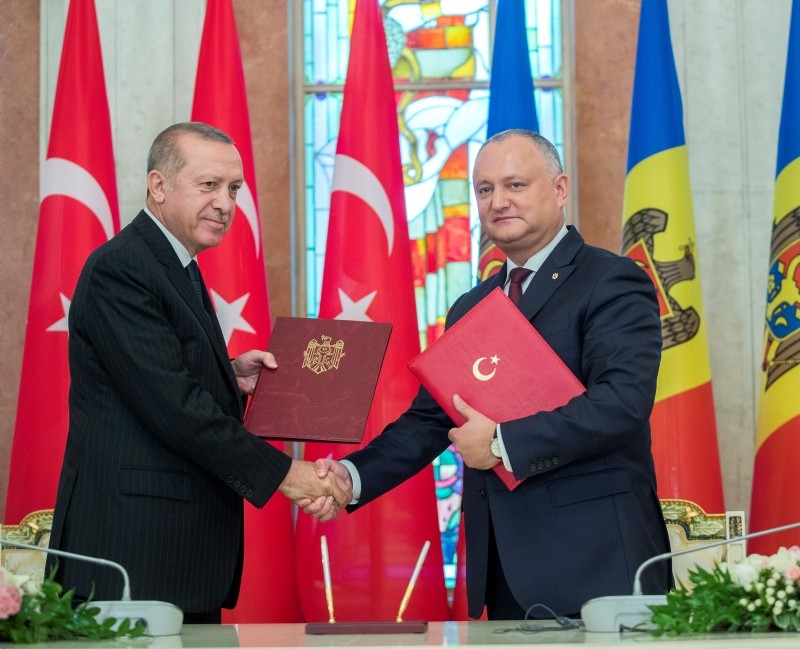 President Recep Tayyip Erdou011fan, left, shakes hands with his Moldovan counterpart Igor Dodon after signing of a bilateral accord in Chisinau, Moldova, Oct. 17, 2018. (EPA Photo)
by Daily Sabah with AA
Oct 18, 2018 12:00 am

Within the scope of President Erdoğan's two-day official visit, Turkey and Moldova have agreed to work to improve bilateral economic relations, including raising their trade volume up to $1 billion

Erdoğan met President Igor Dodon at the presidential building, which was reopened for the occasion. Turkey funded repairs of the building after it was ransacked in 2009 by demonstrators protesting elections they said were rigged by the then-communist government. The presidential building of Moldova was renovated with the help of the Turkish Cooperation and Coordination Agency (TİKA).

Speaking at a news conference after his meeting with Dodon, Erdoğan said the two countries will work to boost economic ties.

"In 2017, the trade volume between our two countries was $466 million. It's below our expectations. Today we agreed to raise it to $1 billion - it's our shared goal," Erdoğan said.

He added that two Turkish state lenders - Ziraat Bank and Halkbank - will open branches in Moldova to help the country deal with its financial situation.

Erdoğan also emphasized that Turkey expects Moldova to support the fight against the Gülenist Terror Group (FETÖ) "without hesitation."

The president said that FETÖ infiltrated Turkey's armed forces, police, legal system and all institutions of the state, adding that Moldova is also under risk as the terror group could do the same there.

FETÖ and its U.S.-based leader Fetullah Gülen orchestrated the attempted coup on July 15, 2016, which left 251 people dead and wounded nearly 2,200 others.

Ankara also accuses FETÖ of being behind a long-running campaign to overthrow the state through its infiltration of Turkish institutions, particularly the military, police and judiciary.

In his speech, Dodon said that Turkey has contributed to a "strong and stable" Moldova.

"Turkey is an important example for the protection of our national interests," he added.

He said the relations between the two countries go back 26 years with more than 60 agreements signed during this time.

Dodon underlined yesterday's historical importance due to the strategic partnership agreement that was to be inked between the two countries.

He said that Turkey has played a very important role in ensuring Moldova's prosperity and in resolving the Gagauz problem.

"We have very good relations in every field, especially in the economy," Dodon said, recalling that last year the two countries exceeded $400 million in trade volume. "We aim to reach half a billion dollars this year and $1 billion next year," he added.

Dodon added that he made a pledge to Erdoğan to secure the autonomy of the Gagauzia Region in the Moldovan Constitution. The autonomous territory is home to a mostly Gagauz population - an Orthodox Christian, Turkic community.

Erdoğan's talks with the Moldovan leader were expected to include discussions on political, economic and security relations along with mutual regional and international issues, and terrorism.

During his two-day visit, he will meet Prime Minister Pavel Filip and the Autonomous Territorial Unit of Gagauzia's (Gagauz-Gökoğuz Yeri) President Irina Vlah.

He will also attend a business forum and inaugurate a preschool supported by Turkey's Presidency for Turks Abroad and Related Communities (YTB) with the bilingual Gagauz-Moldovan educational material.

Commenting on the visit, Moldova's Ambassador to Turkey Igor Bolboceanu said it was "very important and historic."

Bolboceanu told Anadolu Agency (AA) that the visit will boost ties between the two countries.

"The agreements to be signed during the official visit will enhance our cooperation in economic, diplomatic and sociocultural fields and give strategic meaning to our bilateral relations," he said.

Talking about trade between the two countries, he said that Moldova would fully support Turkish businesspeople investing in the country.

"We encourage Turkish businessmen to invest in Moldova. We are ready to help those who want to open hotels, restaurants and entertainment centers in our country," Bolboceanu said.

Bolboceanu said, "The Gagauzia Autonomous Region is a bridge between Moldova and Turkey."

In December 1994, Moldova's parliament offered some 160,000 Turkic Gagauz people within their borders a large degree of autonomy in order to create a favorable environment for maintaining a national identity and culture.

"Gagauzians have an important role in the development of bilateral relations," he added.