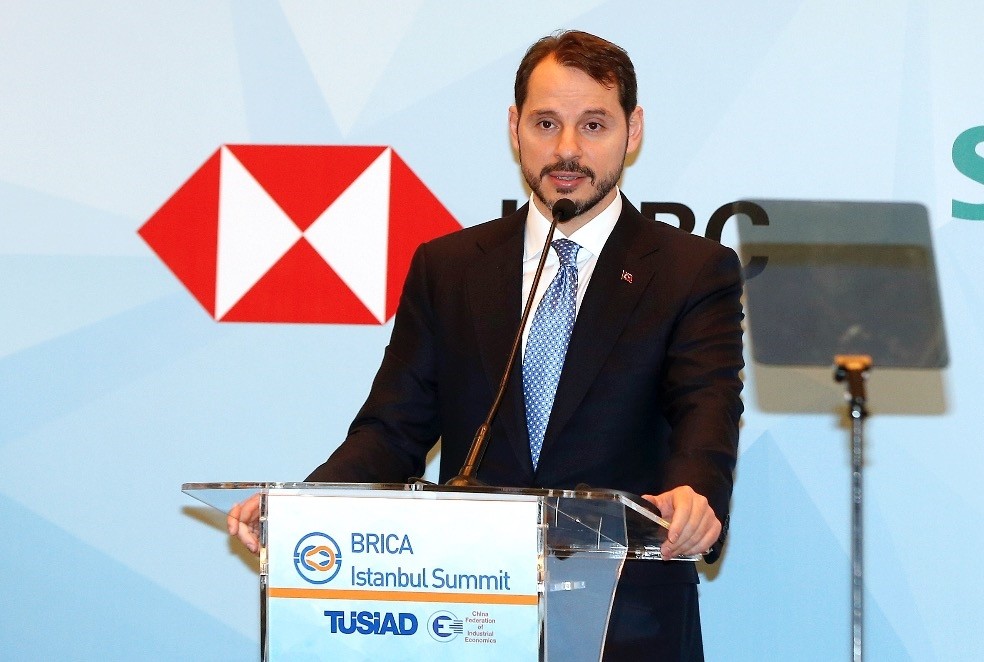 Treasury and Finance Minister Berat Albayrak delivers a speech at the Belt & Road Industrial and Commercial Alliance (BRICA) Summit in Istanbul, yesterday.
by Daily Sabah with AA
Oct 19, 2018 12:00 am

Turkey has seen a sharp decline in its international risk premium recently, according to Treasury and Finance Minister Albayrak, who noted that the Turkish economy has successfully overcome speculative fluctuations and has begun to move firmly with strong stabilization

Turkey's risk premium in international markets has experienced a "significant drop" for over a month, Treasury and Finance Minister Berat Albayrak said yesterday. "CDS [Credit Default Swap] premiums, which are one of the main indicators of risk premium, showed a decline of over 200 base points and improved for more than a month," Albayrak said at the Belt & Road Industrial and Commercial Alliance (BRICA) Summit, organized by the Turkish Industrialists and Businessmen's Association (TÜSİAD), in Istanbul. Meanwhile, he refuted the idea that the country has a liquidity problem, citing that the demand for Turkish bonds was more than triple the bonds' issue size.

On Wednesday, the Treasury and Finance Ministry said in a statement, "The [bond] offering attracted an order book of more than three times the actual issue size from more than 250 accounts."

The ministry on Tuesday authorized three international institutions - Deutsche Bank, Goldman Sachs and Société Générale - to issue a dollar-denominated bond due 2023, as part of the 2018 external borrowing program.

The transaction was finalized with a nominal amount of $2 billion, it said.

With the transaction, the amount of funds raised from the international capital markets as part of the $6.5 billion 2018 Eurobond issuance program has reached $6 billion, said the ministry.

"Three times the demand for Turkish bonds in a period when financial tightening, fluctuations and uncertainty in global markets are tough is the success of the right steps taken by our country and our economy administration, as well as the right policies being implemented," Minister Albayrak added.

Albayrak said that the actions taken by the economy administration were welcomed by investors; thus confirming the confidence in Turkey's sound economic and financial indicators.

"We will definitely not unbend. We, as our government, will continue to carry out our policies with determination," he said on the balancing of the financial market. "Our risk premiums will keep declining, and we will continue to take steps to strengthen our weaknesses with the same motivation to further make the bases more solid in this sense."

Touching on the global economy and the Turkish economy in his speech, Albayrak said the markets favorably met the measures and actions taken by the economy administration.

Stressing that domestic and foreign markets have so far shown a very positive reaction to the New Economy Program (NEP) and all other measures taken, Albayrak noted that the Turkish lira appreciated by 21 percent in the same period against the U.S. dollar and that the domestic borrowing interest rates of the Treasury again showed a regression of more than 230 basis points.

Albayrak pointed to the increase in the yield of U.S. dollar bonds in international markets, adding that the Borsa Istanbul Stock Exchange 100 Index appreciated by more than 4 percent in the last month.

Albayrak on Sept. 20 announced the NEP as a framework to battle the existing problems in the Turkish economy, including currency volatility, running inflation and a double-digit deficit, and set targets that are based on Turkey's macroeconomic realities; thus, reassuring market confidence in the Turkish economy.

On the "Belt and Road Initiative" (BRI), Albayrak said it paved the way for improvement in transportation infrastructure step by step.

"The comprehensive infrastructure move that we have tried to actualize since November 2002 provides a great advantage to this initiative," he said. A multibillion-dollar project, the "Belt and Road Initiative" was launched by Chinese President Xi Jinping in 2013 to jointly build the Silk Road Economic Belt and the 21st Century Maritime Silk Road and connect China to Central Asia and Europe, an area spanning more than 65 countries. Popular estimates for Chinese investment under the BRI range from $1 trillion to $8 trillion, according to the Center for Strategic and International Studies.

Chinese firms that have been operating in Turkey's logistics, electronics, energy, tourism, finance and real estate sectors are expanding their businesses in the country and increased its operations in the country after the launch of the BRI. Aside from that, the Chinese government also encourages its citizens to visit BRI countries.

Albayrak said that Turkey disassociates positively from emerging markets along with Brazil because of the appreciation rate of its local currency against the dollar and improvement in CDS premiums, underlining that due to the decline in the bond yield, Turkey is also in the top two among the developing markets in this area.

Minister Albayrak noted that they successfully fought against the speculative attacks exposed in August.

"We did not allow the pessimistic and panic atmosphere intended with these speculative attacks. Even though some tried to create a pessimistic image or even disaster scenarios for Turkey, we left the process behind through a powerful management step-by-step with rational policies, and our strong, assuring discourse and stance," he said, stressing that Turkey has no liquidity problems.

Recalling that as stated last week at the G20 Finance Ministers and Central Bank Governors Meeting in Bali, Indonesia, Turkey's debt stock is one of the lowest in the world along with its household debt stock, Albayrak said that with regards to Turkey's total balance sheet, its ratio to the gross national product is 135 percent, while this figure stands at 211 percent in the developing countries and at 318 worldwide. "Turkey does not have a liquidity problem in this sense," the Treasury and Finance minister added. "Those who try to create this perception must have taken the required lessons with last Tuesday's bond issuance."

Minister Albayrak said the solid strengthening of the Turkish lira firmly motivated the Turkish private sector as well, highlighting that Turkey is beginning to write a new economic success story.