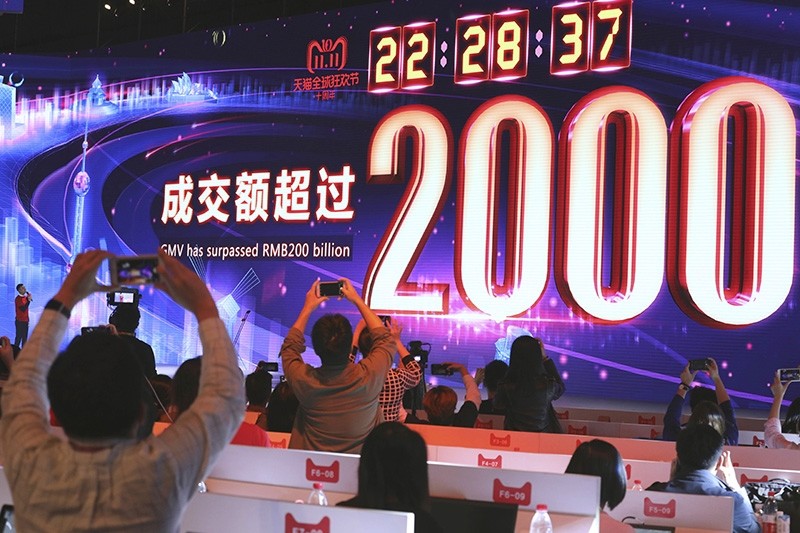 Online shoppers in China have shattered last year's record of $24 billion in sales on the country's annual buying frenzy Sunday, as the tradition marked its 10th year.

The spending binge has for years eclipsed Cyber Monday in the U.S. for online purchases made on a single day. This year's tally breaks from gloomy forecasts about the world's second-largest economy, which is struggling with a tariff war with the U.S., a stock market slump and slowing overall growth.

Known as Singles Day, the clamor for deals and discounts was heralded with characteristic fanfare by Chinese e-commerce giant Alibaba, which has turned an unofficial holiday for people without romantic partners into a yearly windfall for digital retailers. In 24 hours on Sunday, Alibaba racked up over $30.8 billion in gross merchandise value (GMV).

A massive screen at Alibaba's gala in Shanghai showed the surging sales numbers in real time: At 2 minutes and 5 seconds after midnight Saturday, 10 billion yuan ($1.43 billion) in purchases had already been made on Alibaba's platforms. By the 1 hour and 47 minute mark, that number had increased tenfold.

The sales figures are an indication that China's ongoing trade war with the United States has done little to dent domestic consumption so far.

"This year's 'double eleven', in terms of the size of consumption, data, I think should be successful. There is now a saying that 'winter is coming' for the economy," said He Xiaoyu, a lecturer at the Central University of Finance and Economics, referring to Singles Day by its nickname 11.11, or November 11.

"There are a lot of bearish voices, which led people to tighten their belts and give up buying during the double 11. I don't think this will happen."

In the lead-up this year's event, there were concerns that Alibaba and other e-commerce sites like JD.com, which runs a similar sale, may be hit hard by new tariffs on U.S. goods.

Singles Day began as a spoof event celebrated by unattached Chinese university students in the 1990s, countering Valentine's Day. Singles Day has been a fixture in China since Alibaba turned the "holiday" - meant to deride single people - into a shopping extravaganza by offering deep discounts on a range of products from electronics to travel packages.

Other companies have since followed suit and, in 2015, Singles Day surpassed Black Friday and Cyber Monday combined, two of the largest shopping days in the United States.

The Twitter-like Weibo platform was blanketed with Singles Day-related posts on Sunday, from users proudly proclaiming that they had resisted the shopping urge this year to those who cheerfully listed an array of mundane purchases.

Alibaba founder Jack Ma, who will step down as chairman in less than a year, attended the start of the gala in Shanghai and appeared in a video message in which he wrapped up live hair crabs, a popular online purchase.

Singles Day "is not a day of discounts, but rather a day of gratitude," Ma said in the video. "It's when retailers use the best products and best prices to show their gratitude to our consumers."

It's expected to be the company's final November sale event with founder and chairman Jack Ma at the helm. Current chief executive Daniel Zhang will take over as chairman next year, the company said in September.

Chinese e-commerce platforms have come under fire in the past for peddling low-quality and counterfeit items. Hong Tao, an economics professor at Beijing Technology and Business University, said Singles Day encourages shoppers to prioritize cheap prices over high quality, causing them to purchase items they don't need.

"People are swept up in the festivities," Hong said in a phone interview. "This burst of consumption, confined to just one day, can be exhausting for both buyers and sellers."

Analysts say that despite continued strong growth, sales are likely to be hit by economic headwinds and new competition from competing sales events.

"With an increasing number of promotion events a year, consumers no longer feel that Double 11 is the only opportunity to get good bargains," said Pedro Yip, partner at consulting firm Oliver Wyman.

"Having said that, there are more consumers who still enjoy shopping at double 11 than those that don't," he said.

While both Alibaba and competitor JD.com have pledged to use biodegradable packaging to cut down on waste, research conducted this month by Greenpeace East Asia said many plastics marked "biodegradable" and used by Chinese e-retailers can only break down under high temperatures in facilities that are limited in number across the country.

Greenpeace estimated that by 2020, "biodegradable" packaging could produce roughly 721 truckloads of trash in China every day.

While sales growth remains steady, Alibaba's stock has dropped 16 percent this year amid economic uncertainties linked to brewing trade tensions between China and the United States.

Earlier this month, Alibaba revised down its full-year revenue forecast, sending a chill through investors, as it said sales of big-ticket items would be impacted.

To compensate, the company will take in less income from its platforms in the near term in order to retain brands and new buyers, it said.