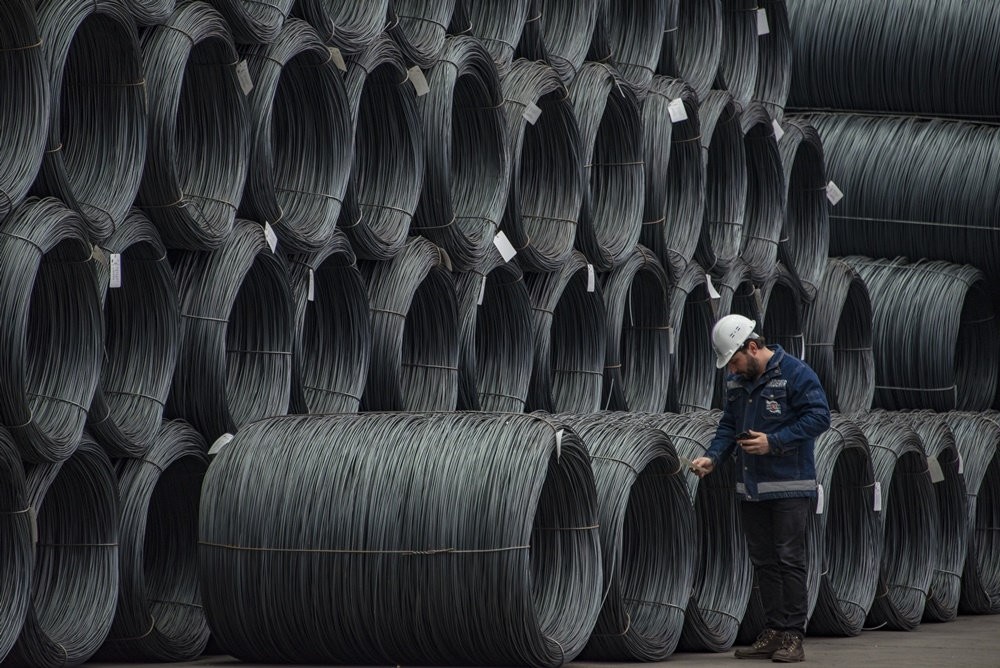 The Turkish steel sector, which succeeded in increasing its exports despite recent tariffs by Washington, is now looking to raise its share in Latin America and double its exports to the market

The Turkish steel industry, which comes to the fore as the most affected sector by increasing protectionist tendencies, especially from the U.S., has turned its route toward Latin America, whose annual steel imports reach some $31 billion. The sector, which increased its exports despite the recent additional tariffs imposed by the U.S., has begun to increase its influence in new markets and has rolled up its sleeves to increase its market share from 4 percent to 12 percent in Latin American countries, ranging from Panama to Colombia and from Chile to Paraguay with the aim of doubling its exports to this market, according to a report in the Hürriyet newspaper.

Representatives from the steel industry, which have put Latin American countries on their target, will take part in public and private sector projects in the coming period. Some 40 Turkish companies participated in the Latin American Steel Conference (Alacero) in Colombia, as the guests of the Steel Exporters Association (ÇİB), and held over 150 bilateral business meetings for projects in these countries.

ÇİB Chairman Adnan Aslan recalled that annual steel imports in Latin America exceeds $31 billion. "Turkish steel sector continues to be preferred worldwide with its high quality and competitive prices. Today, despite the high prices, we continue to export to the U.S. Because we are ahead of many countries in terms of quality and service. Our goal is now Latin America. We achieve $590 million in annual exports. There is a very serious business volume in this market," Aslan said.

Commenting on the bilateral meetings involving 40 Turkish companies, ÇİB Board Member Gürkan Türkaslan said that as a result of these talks, they aim to double their exports to Latin American countries, meaning that they will export over $1.2 billion to these countries in the coming period.

"Our companies came together with more than 150 companies in three days," Türkaslan continued. "Its returns are very important for us. More than 50 percent of the companies here came to the Latin American market for the first time. We aim to increase the number of such events." Pointing to the serious interest in Turkish steel in the region, Türkaslan stated that Turkish steel is used intensively in the housing projects in Panama, suggesting that it can also be used in road, subway and airport projects. "In construction opportunities, Colombia is the best in the region. They always say that they want to work with Turkish contractors. Panama purchases a significant portion of its construction steel from Turkey," Türkaslan said. "Cuba is a thriving place. The Caribbean region and Latin America are densely populated and emerging regions. It is possible for crises in the region to create certain opportunities."

ÇİB Board Member Mustafa Tecdelioğlu said that the Turkish steel sector sends products to 200 countries from Chile to Australia. Stressing that in addition to bilateral talks, participation in Alacero is also important as the said event is the meeting point for the steelmakers, bringing together delegations from 80 countries. Recalling that Turkey used to export 1.8 million tons of steel to the U.S. before the additional tariffs were imposed by the country, he pointed out that the sector expects positive steps to be taken in the coming days.

"We hope we get back what we have lost unjustly. We also expect important projects from Iraq after the normalization process. Syria, on the other hand, is a market that can stand out for Turkey and where we can create trade volume," Tecdelioğlu concluded.

ÇİB President Aslan said previously they exported 1.1 million tons of steel to the Latin American region in 10 months of the year, with an increase of 8.4 percent.

Meanwhile, according to the Turkish steel exports figures to Latin American countries in the first 10 months of this year were: Chile leading the way with $103 million, followed by Panama with $80 million, Colombia with $70.3 million, Peru with $48.2 million, Jamaica with $46 million, Costa Rica with $44.5 million, Mexico with $44.3 million, Haiti with $36 million, Brazil with $34.2 million and the Dominican Republic with $29 million. Turkey's steel exports increased by 35.2 percent in the first 10 months of this year, reaching $12.4 billion, according to ÇİB. In this period, steel exports rose by 15.5 percent to 16.8 million tons in terms of quantity.

In October, steel exports achieved an increase of 46.9 percent in value and 46.3 percent in quantity, reaching $1.49 billion and 2.2 million tons in exports in the said month.