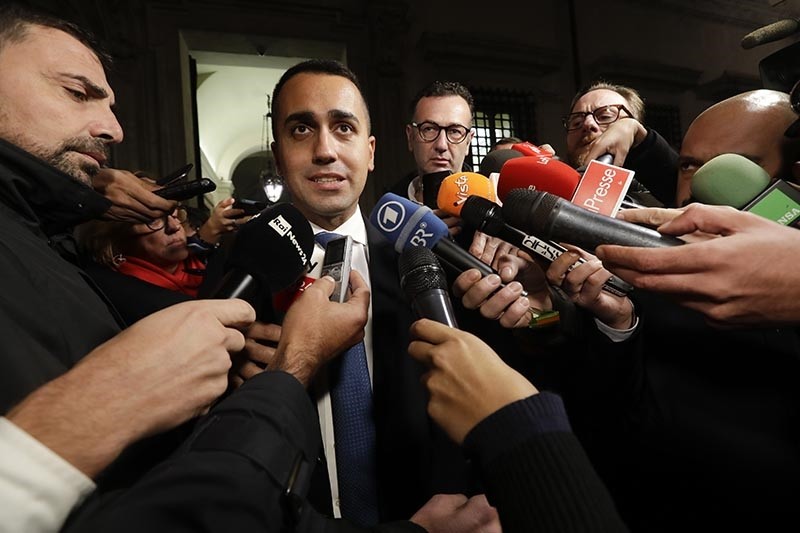 Italy is on the verge of an economic meltdown as bond yields hit three-week highs on Wednesday, widening the gap over top-rated German peers, after Italy re-submitted its 2019 budget to the European Commission with unchanged growth and budget deficit assumptions but falling debt targets.

Yields on higher-rated bonds in the eurozone fell on renewed volatility in Italy, a slide in oil prices and news that Germany's economy contracted for the first time since 2015 in the third quarter.

But it was the details of Italy's new draft budget that gripped bond investors at the open of trade. EU fiscal rules require highly indebted governments such as Italy to cut their structural deficit and debt every year.

Italy stuck to its previous plan to raise its structural deficit, by 0.8 percent of GDP next year, rather than cut it as required under EU rules. That means Rome remains on a collision course with the Commission.

Consequently, Italian bond yields rose 8 to 9 basis points on the day across maturities, marking Italy out once again as the weak spot in European fixed-income markets.

Italy's 10-year bond yield rose 9 bps to a three-week high at 3.54 percent, pushing the gap over benchmark 10-year German Bund yields to 314 bps from around 303 bps late on Tuesday.

"I'm not surprised the market is trading this way and we need to see more signs of a compromise on the budget before we get relief for Italian markets," said Commerzbank rates strategist Rainer Guntermann.

With the exception of Italy, most 10-year bond yields in the euro area were 1 to 2 bps lower on the day.

Despite pressure from the European Commission, which rejected Rome's budget outright last month in a first for the EU, Italian Deputy Prime Minister Luigi Di Maio vowed to stand firm on the country's anti-austerity plans.

"The budget will not change, neither in its balance sheet nor in its growth forecast. We have the conviction that this is the budget needed for the country to get going again," Di Maio, who leads the anti-establishment Five Star Movement (M5S), said Tuesday evening after a ministerial meeting.

M5S and its coalition partner, the far-right League party, insist the budget will help kickstart growth in the eurozone's third largest economy and reduce the public debt and deficit.

The Commission gave Italy until Tuesday to make changes to its 2019 plans and warned non-compliance could activate the "excessive deficit procedure" (EDP), a complicated process that could lead to fines and possibly provoke a strong, adverse market reaction.

Italy intends to run a public deficit of 2.4 percent of gross domestic product in 2019 -- three times the target of the government's center-left predecessor -- and one of 2.1 percent in 2020.

League head Matteo Salvini, who is also a deputy prime minister, vowed Monday to put his back into "defending the budget, as if it were a rugby scrum."

While Rome targets economic growth of 1.5 percent, Brussels anticipates just 1.2 percent, putting Italy at the bottom of the EU table.

The IMF forecasts growth of 1.0 percent for 2020 and was skeptical of Italy's reform programme in its latest report on the country.

Italy's Economy Minister Giovanni Tria has accused Brussels of getting its sums wrong.

It would be "suicide" to try to reduce the deficit to the previous goal of 0.8 percent of GDP, he has said, insisting "we must get out of the trap of weak growth."

The fine for refusing to review the budget could correspond to 0.2 percent of Italy's GDP -- about 3.4 billion euros ($3.8 billion)

European Economics Commissioner Pierre Moscovici has said he hopes a compromise can be found to avoid sanctions.

Speaking Tuesday to the European Parliament, German Chancellor Angela Merkel said the EU wanted to reach out to Italy, a founding member.

"But Italy also adopted the many rules that we now all have in common," she added.

The European Commission "will make the first step to move Italy into EDP" after a debt update expected on Nov. 21, said Lorenzo Codogno, former chief economist at the Italian Treasury Department.

The country will likely be given three to six months to prepare correction plans, after which nothing will happen until a new Commission takes up office at the end of next year following European Parliament elections, he said.

"The true guardians of fiscal discipline will be, as usual, financial markets," he said.

All eyes are now on the "spread" -- the difference between yields on 10-year Italian government debt compared with those in Germany -- which has more than doubled since May, when negotiations to form the coalition government in Rome began.

Uneasy investors have already cost the taxpayer an additional 1.5 billion euros ($1.7 billion) in interest over the past six months.

A wider fear is that stress in Italy could spread to other European countries which are only just recovering from the eurozone debt crisis.

"We do not expect a crisis that would lead to a loss of market access," said Agnese Ortolani, analyst at The Economist Intelligence Unit.

But the country's debt and the weakness of its banking sector mean "Italy would be too large to rescue without massive ECB support in the event of a large-scale financial crisis," she said.