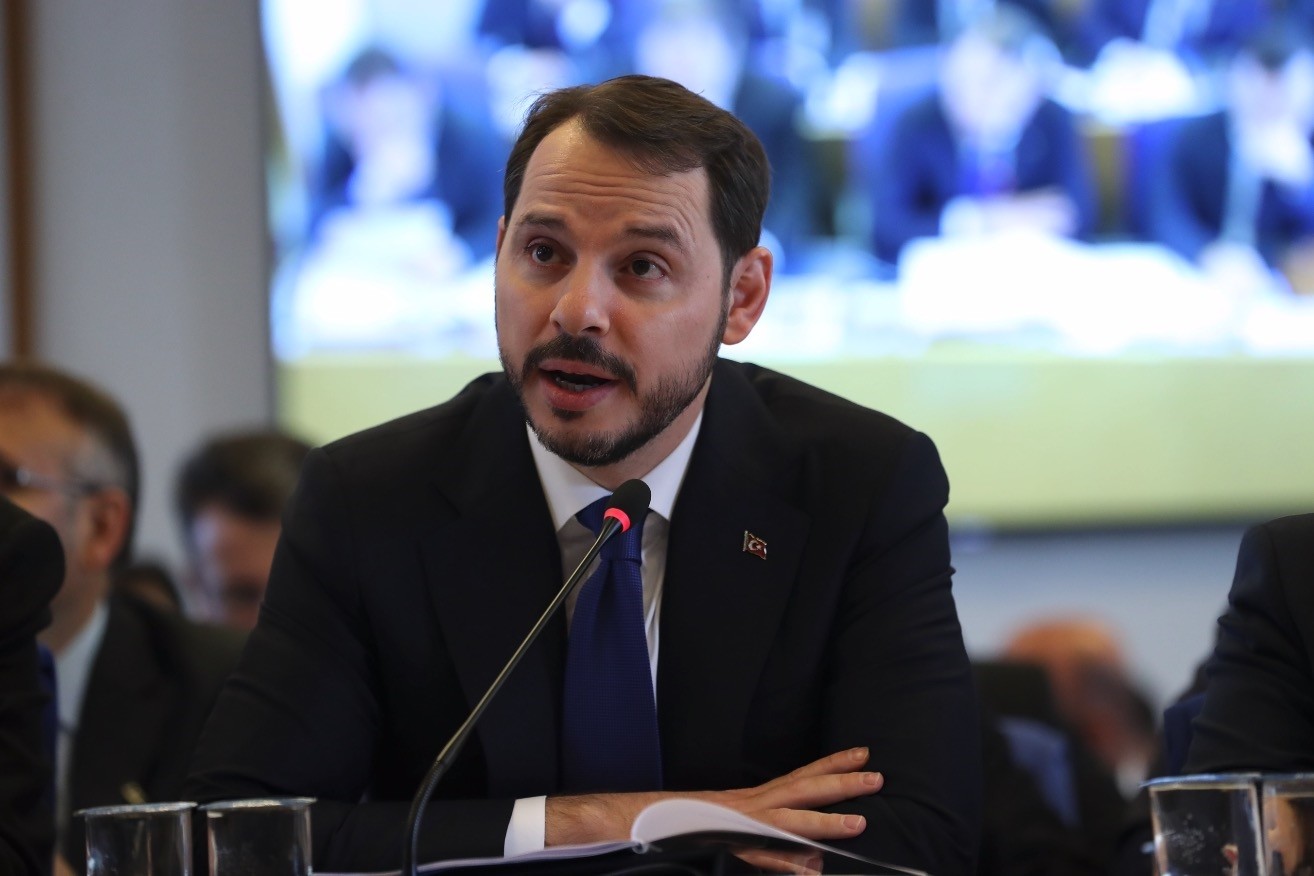 Treasury and Finance Minister Berat Albayrak speaks during his presentation at Parliamentu2019s Planning and Budget Commission, yesterday.
by Daily Sabah Nov 23, 2018 12:00 am

In August and September, in particular, a turbulent period dominated by running inflation and depreciating currency triggered by developments in local and global markets was the main topic of talk on the Turkish economy. However, strong measures implemented by the economy administration have parried the blow and ensured stabilization in Turkish markets. At a presentation yesterday in Parliament's budget commission, Treasury and Finance Minister Berat Albayrak stressed that the measures included steps to ward off any speculative movements in foreign currency markets to lower the Turkish lira as well as massive discount and sectoral mobilization campaigns to mitigate inflation.

Minister Albayrak emphatically stated that the government's measures to stabilize the economic environment also have paid off in international financial markets as investors return to rallying Turkish assets.

The minister recalled the speculative movements that increased against the Turkish economy that do not affect the macroeconomic fundamentals of the country. But the minister added the government introduced a number of measures to stabilize fluctuations, ease liquidity conditions and support financial stability and the effective operation of the markets. "These measures have created immense positive impacts on financial markets," the minister remarked.

As part of the expansive measures, the banking watchdog, the Banking Regulation and Supervision Agency (BDDK), decreased the daily limit on foreign currency swap transactions from 50 percent of banks' equity capital to 25 percent. Withholding tax on deposit accounts has been regulated, and business contracts inked in foreign currencies have been converted into Turkish lira. The treasury and finance minister strongly emphasized that the recent measures have received a strong response from international investors. "Thanks to a strategic debt policy, we have decreased the sensitivity of the debt stock to interest rates, exchange rates and liquidity risks," Albayrak said and added: "The Treasury received higher than expected demands in dollar and euro-denominated bonds in October and November. The success of auctions in international markets proves that the measures we have taken have received a strong response from financial investors."

International demand for euro bonds due in 2026 more than tripled the bonds' actual issue size. The transaction was finalized with a nominal amount of $1.7 billion. The bond has a coupon rate of 7.25 percent, and its yield rate for investors is 7.50 percent. The largest national share of the bonds was sold to investors from the U.K. with 35 percent.

The euro bond issue brought the amount of funds raised from international capital markets this year to nearly $7.7 billion.

In October, the Treasury issued dollar bonds worth $2 billion, while the demand totaled $6 billion, three times the initial target. The bond, which matures on Dec. 23, 2023, has a coupon rate of 7.25 percent and a yield rate of 7.50 percent for investors.

Most of the bonds were sold to investors from the United States, followed by the U.K with 23 percent, other European countries with 11 percent, Turkey with 5 percent and other regions with 1 percent. More strikingly, following the issuance of these bonds denominated in foreign currency, the Turkish Treasury cancelled auctions scheduled to raise resources from domestic markets, and in three scheduled auctions the Treasury sharply cut its domestic bond offers on Nov. 14. The yields consequently fell markedly below market rates, hitting below 20 percent on two-year government bonds since July.

Preliminary indicators, Albayrak pointed out, suggest a slowdown in economic activity and the start of a balancing period in the Turkish economy. Citing the New Economic Program (NEP) announced on Sept. 20, Minister Albayrak said that the economy is expected to register a growth rate of 3.8 percent, 2.3 percent, and 3.5 percent, respectively in 2018, 2019 and 2020.

Showing a surplus for two consecutive months in August and September, Turkey is now expected to see a record current account surplus in October, according to Albayrak. For the first time in the past three years, Turkey's current account balance posted a surplus in August – totaling $2.59 billion, improving sharply from a $923 million deficit in the same month last year.

The improvement maintained its trend in September when the country's current account balance showed a surplus for the second consecutive month this year. Turkey's current account surplus totaled $1.83 billion, improving from last year's deficit of $4.4 billion.

The treasury and finance minister emphasized that fiscal policy will be conducted coordinately with monetary policy in line with the government's targets, particularly inflation, current account balance and growth.

"Fiscal discipline will be our main anchor in the upcoming period," Albayrak said, adding that qualified investments, value-added production, and employment and export-based growth will continue to be supported with income policies.

The Turkish banking sector has performed better than in many other countries with its strong capital structure, high profitability and asset quality, Albayrak noted, pointing out that the low-interest loan balance granted by state lender Ziraat Bank reached TL 45 billion ($8.51 billion) as of October.

Emphasizing that oil prices have fallen from $85 to less than $65 since the beginning of October, the minister said that the recent decline was "positive for oil-importing economies like our country."

Albayrak also suggested that risks related to the coming period in the global economy are seen as downward in the short term, saying that continuation of the U.S. Federal Reserve's gradual increase of interest rates and reduction of its balance sheet constitute a risk for developing countries.